David McGillivray first turned up in this blog in 2013 feted for his highly-admired work on cult sex films, horror movies and scripts for Julian Clary pantos etc.

At the time, he said: “My films are not art. They’re just product designed to give people a bit of a thrill in whatever way is possible.”

Now he is back here again, in two crowded-to-overflowing upstairs rooms of a pub in NoHo or Fitzrovia or whatever you want to call it in London…

Well, this is what he explained to the assembled throng of well-dressed and (mostly) respectable-looking fans of dodgy British soft-core sex films in the room above the pub: 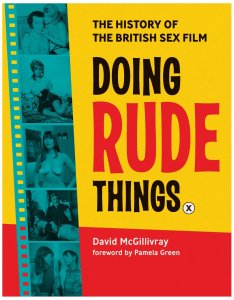 When I was about 10 or 11, I found my father’s ‘glamour magazines’ in the bottom of his wardrobe.

When I say ‘glamour magazines’ you all know what they were – and they were called ‘art studies’ in those days. I was intrigued by them.

I thought: I’m obviously not meant to see these. He obviously hid them so that I wouldn’t. And so I became intrigued.

I reckon that discovery dictated the rest of my life and certainly my career.

Who could have thought that, in 1992, Pamela Green who, of course, featured prominently in all the magazines, would write the foreword to my book Doing Rude Things? 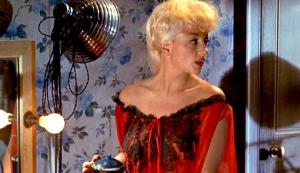 And then, another 25 years on, here we are in the Blue Posts pub, just a stone’s throw from Newman Passage, the main (opening) location of Peeping Tom which, of course, Pam starred in.

When the book first came out in 1992, I think most of the films I talked about had been forgotten. And I also think that the reason today we know films with titles like Secrets of a Door-to-Door Salesman and The Ups and Downs of a Handyman is basically because of me.

But please humour me – I’m 70 years old and I deserve it!

The films had been forgotten but subsequently, after the book went out of print, they were kind of re-discovered and suddenly there was a film of the book and the films turned up on television for the first time, were issued on video for the first time – and I like to take credit for that. 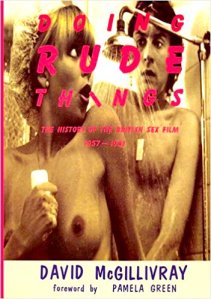 The 1992 edition of Doing Rude Things

As a result, I wrote a series of articles for a magazine called Cinema, which became the basis of the book Doing Rude Things.

After that went out of print, several people came to me and said: Why don’t you re-issue it? And I said No to basically everyone.

My feeling was that I couldn’t think of an audience for a re-print of the same book.

But, 25 years down the line, a publisher came to me with a new proposal for an updated edition and, by that time, life had changed.

Back in 1992, the internet DID exist, but nobody was using it.

By 2016, when I started working on this book, there was an entire community online – young and old – all sharing notes about these TERRIBLE films. Suddenly, there was a new audience for this genre.

So that is why the book has come out again.