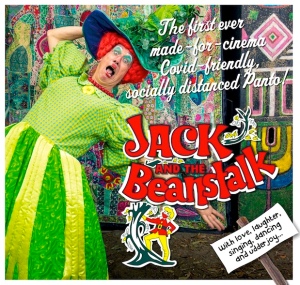 It goes on general release today at Everyman cinemas in the UK and, on 11th December, at Showcase’s UK cinemas.

It is also streaming online at www.pantoonline.co.uk until 10th January 2021. Profits from the Panto Online streaming will be supporting six charities.

With the UK in COVID Lockdown and most live stage shows cancelled, Peter Duncan – who produces stage pantos and whose parents were also panto producers – rounded up 35 showbiz chums/creatives and filmed a traditional jokey, musical, dancing, colourful version of Jack and the Beanstalk in two large back gardens in SW London. He built the sets, sourced the costumes, wrote the script, created the singalong songs and produced/co-directed the whole shenanigans.

The movie is being screened in 55 cinemas across the UK, billed as “a planet-saving pantomime packed with topical references, songs, laughter and great special effects for all the family.”

I saw it last night with author/journalist/musical performer Ariane Sherine’s 9-year-old daughter who had seen three stage pantomimes before, some of which, she felt, diverged too much from the original storylines.

Below is her totally uncensored review of the movie. Throughout the screening, she wore a woolly pink hat with a pom-pom on the top.

John asked me if it was better to see the film wearing a woolly bobble hat or not wearing a woolly bobble hat. I think it IS better to have a woolly hat or a hood on or something because then you have something around you. It doesn’t need to be a woolly hat. It can be a long hat with bits at the side  It can even just be hair or a scarf. It makes you feel engaged; it makes you feel like you’re in it, like you’re part of it (the film). You think about it more and I think it’s really good.

I really liked the bits in the film about Climate Change and the Lockdown and I especially liked the bit about Donald Trump – when the chair said: “The orange man won’t leave the White House.”

It was really fun but I would like the end credits to have had different music because I feel like that music is not very cheery. I would prefer it not to be so spooky and to be more cheery. It didn’t really match the film. At the end it felt a bit creepy; it didn’t feel so jolly.

The music was good generally, though. I liked it. It was jolly. And I liked most of the lyrics. I liked the lyrics at the start about Lockdown and Climate Change and the bits with the signs – the placards. That made it feel a lot like a live pantomime.

They included a lot of bits where the (cinema) audience could join in – Oh no he didn’t! Behind you! – that kind of stuff.

The acting was good and it seemed like the non-main characters did more of the… (stagey pantomime acting) like it wasn’t real. I liked the Dame. I didn’t realise (until afterwards) that she was played by Peter Duncan.

Considering that it was shot in a real back garden, they made it seem quite a bit like a big film with the tree as the beanstalk. Before the screening, I had been wondering how they would do the beanstalk. I had thought they might paint the tree green.

From some angles, looking at it a certain way, with the vines around it, they did make it quite a bit like you would imagine it.

I had been wondering how similar it would be to the original Jack and The Beanstalk story. Some of the pantos I’ve seen changed the plots a bit. I don’t mind that but this one was quite a lot like the actual Jack and the Beanstalk you think of.

I do feel some of the characters in the film were quite selfish. The girl was given a wish and she wanted to drive cars. Why couldn’t they wish for World Peace or the end of Climate Change? They were so annoyed about it before (at the start of the film) but now they just want to drive cars. They did a big campaign about Climate Change at the start (with all the placards) but, after that, now it’s “I want to drive!”

And, just after she’d told her dad: “Oh no, we can’t dump plastic in the sea… That’s bad for pollution!” she says she wants to be a driver! And even for the other ones, I felt they were quite selfish. Why couldn’t they wish for World Peace or even for them to bring a good thing to the world or something like that. Even to end Lockdown, to end hunger, to end poverty. At least to end Lockdown. Why didn’t they choose one of those?

But I guess they couldn’t have wished for that, because it would have meant their wish didn’t come true, because nothing’s happened.

My own wish would be for the Earth to be big enough to sustain humans – to always have enough food and water and for the climate to be OK. For the Earth to hold an infinite amount of humans and for humans to live forever.