BBC photo of Martin the fool, but he is no fool on payment.

After my ongoing jury service yesterday, I went to the Pull The Other One comedy club run by Vivienne and Martin Soan only to find out that Vivienne has also been called up to do jury service next month.

Perhaps the court system was in awe of her husband Martin who, last weekend, was crowned “official fool” at the annual International Jesters’ Tournament at Muncaster Castle in the Lake District and who receives an annual salary in beer. (Martin is clearly no fool.)

Last night, Pull The Other One had an even more extraordinarily varied bill than normal with the utterly brilliant Men In Coats doing their visual gagathon, the surreal Cheekykita doing whatever it was she was doing (that’s a compliment), Mr Susie getting bigger laughs than most comics by simply holding up one-word gags on cards and close harmony trio Totes Awes strutting their thing.

Topping the bill were Owen O’Neill and Miss Behave, the latter of whom confirmed, much to my relief, that she is hosting the increasingly prestigious annual Malcolm Hardee Awards at this year’s Edinburgh Fringe, as well as staging her own Game Show and helping Bob Slayer run the new Bob’s Bookshop venue. 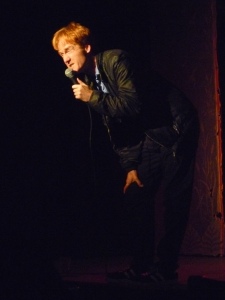 I suspect the hottest show on the Fringe, though, will be The Shawshank Redemption which Owen adapted for the stage and which will star a cast including Omid Djalili, Phil Nichol and Ian Lavender (of Dad’s Army).

Throughout yesterday (when not in court) I was having a staggered e-conversation with comedian Matt Roper. It went along these edited lines:

Me: The last time my blog readers heard of you, you were in a wheelchair in Saigon… then you were getting wet in Burma and ultrasound scanned in a Bangkok hospital. So, for the sake of any future eBook readers if nothing else, what happened with the deep vein thrombosis you had?

Me: You mean by taking drugs in the future?

Matt: Yes, of course. To keep me from getting a recurring deep vein thrombosis. I don’t do drink, drugs or anything these days. Tucked up in bed at 11.00pm wearing my compression socks, sipping a glass of water. Thirty-six and waiting for God. My pee is so clean I could drink it.

Me: Too much information. What happened about the calcification in your flesh which they found in Bangkok?

Matt: Harmless, they now tell me.

Me: Where did you go and what did you do betwixt Bangkok and Blighty?

Matt: Went to India… Delhi, then a train journey up to the foothills of the Himalayas and the town of McLeod Ganj. It’s an old British settlement given to the Tibetan community-in-exile when the Dalai Lama fled Tibet in 1959. Lovely place. I like being up by the mountains. We had some terrific storms. McLeod Ganj nestles about 5,000 feet above sea level. You have large eagles swooping down in the valleys BENEATH you and snowcapped peaks above. Magic. No bizarre people involved, but I did nearly get mugged by a monkey – all for a bag of samosas.

Me: Where are you at the moment?

Matt: I’m out the back of a pub in south London on the set of a short comedy film I’m making with Charlie Henniker and Susan Husband called Knock Knock. Then tomorrow (Saturday) I fly to Cape Town for the comedy festival there. As Wilfredo.

Me: What part are you playing in the film?

Matt: Ironically, a drinker in a pub.

Me: You had to cancel your own Edinburgh Fringe show because of your medical problems earlier in the year. Are you popping up to the Fringe at all in August?

Me: And are you going to do a show sooner or later about your worldwide exploits and medical mayhem?

Me: Have you got any photos that cover the answers to any of the above?

Matt: No. But I have got one of me wearing a t-shirt to support (the American comic) Rick Shapiro in his Parkinson’s awareness campaign. But Rick Shapiro is another blog entirely…