Tag Archives: Penny For The Guy

In this extract from the late Malcolm Hardee’s autobiography I Stole Freddie Mercury’s Birthday Cake, he explains how he used to make money as a schoolboy.

When I was in the choir at St Stephen’s, I had a surplice and I used to wear it to go carol singing and earn some money at Christmas. I used to take a whole gang round with me.

We’d go round the posh houses in Blackheath carrying candles and everything. People would invite us in and put us on tape recorders to send to their relatives. They thought it was for the church, of course.

I used to make money all the year round.

From early October until November 5th it would be the ‘Penny for the Guy’ routine. Then, once November had gone, I got the carol singing going.

The rest of the year, we went round in Boy Scout uniforms and did Bob-a-Job. No-one knows when Bob-a-Job Week actually is, so you can do it any time.

We almost got caught out once because we accidentally went to a Scout Master’s house and he knew it wasn’t Bob-a-Job Week. But I explained to him I was in a different branch of the Scouts and it was our Bob-a-Job Week.

The Scouts I was in were not the Baden-Powell Scouts. This guy had set up a splinter-group called BBS (British Brotherhood of Scouts).

The Baden-Powell Scouts’ motto is “Be Prepared”. The BBS one was  “Always Ready”. So everything was almost the same but not quite. We still wore the uniforms and had the scout oath and ran flags up the pole and all that. When I saw my BBS Scoutmaster years later, it was so obvious that he was gay but at the time he was just a Scoutmaster to me. People weren’t so aware of gayness in those days.

I’ve never had any homosexual experiences and yet they must have been going on around me. That Scoutmaster didn’t fancy me, he just used to hit me with ropes every now and again. He used to like hitting people with ropes. I think he must have got chucked out of the Baden-Powell lot for some sort of sexual scandal. He also had another church he took us to called St Magnus the Martyr up by London Bridge which was another High Church. His real name was Charlie Brown, but we called him ‘Bosun’. We had three Scoutmasters: Bosun, Beaky and Kim.

I eventually got thrown out of the BBS for writing fake notes from my mother to avoid going to a Camp.

I was no angel. 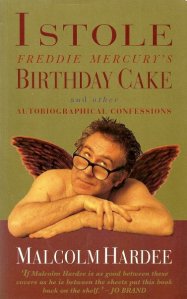 I got thrown out of the choir.

I got thrown out of everything, really.

I got expelled from primary school apparently – I don’t remember it  –  I was too concussed. We used to have these stairs at the school and I used to dive up to hold on to a ledge and swing. I swung up and my feet touched the bottom and my hands let go and I fell on my head and ended up in Lewisham Hospital. I had to stay in three or four days. They discharged me early because I was going a bit berserk – racing about in the wheelchairs in the ward and stuff.  So I got thrown out of hospital too.

The last Increasingly Prestigious Malcolm Hardee Awards Show will be staged at the Edinburgh Fringe on Friday 25th August 2017.