Steve From Up North says: “It’s all about life, really – poetry and comedy”

Steve Taylor – aka ‘Steve From Up North’ – was last mentioned in this blog in October 2011.

I think he was given his geographical nickname by the late comic Malcolm Hardee.

In fact, Steve is from the North West of England.

In March this year, he told the Chorley Guardian:

“In the 1980s, no comedy clubs existed outside of London. In 1982 Chorley comedian Phil Cool came into our pub. Because I was into comedy I recognised him.

“He was about to make it big time and said he wanted somewhere to practise and work-in his routine. So I started a comedy club downstairs in our cellar called Laughingas Comedy.

“We had this idea that every other Monday night there would be a guest comedian and anyone else who wanted to try out their material.

“Then I went to London and brought some acts from there, such as Jo Brand, Jeremy Hardy from Radio 4, Arnold Brown from The Comedy Store, Phil Cornwell from Stella Street, Felix Dexter, who was one of the first comedians on the circuit, and Jenny Eclair.”

So I talked to him via Skype.

Steve Taylor with his then wife Kim at The Royal Oak, Chorley, in the 1980s

STEVE: (LAUGHS) Well, I stopped promoting comedy just as it became popular and there was money to be made out of it.

STEVE: You can’t make money writing poetry, unless you write verses for Christmas cards and birthday cards. Who pays you for poems other than comedy nights? – If you’re lucky.

JOHN: So why the career change – writing poetry?

JOHN: So why poetry now?

STEVE: I’ve always written stuff but never kept it. Then, about three years ago, I wrote something on holiday which I really liked and I thought: THIS could be performed! It was a poem about Magaluf. So I tried doing a few poems at a couple of open mic nights and they went really well.

I thought: I’m going to save the poems. And, as time went on, I just felt myself in the frame of mind to write. When I started writing more and more and including them in stand-up gigs and putting some on Facebook, people started saying: Why don’t you put them in a book?

JOHN: Are they written as performance poems?

STEVE: In the book, perhaps about 30% are performance poems. There’s 100 poems in there.

JOHN: Is there a poetry circuit in the North West of England? 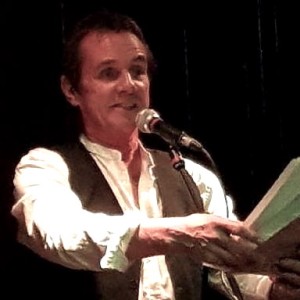 “Comfortable playing to an audience that don’t expect poetry”

STEVE: I’m not keen on the poetry circuit. I feel more comfortable playing to an audience that don’t expect to get poetry.

So I might play to an open mic night where it’s 90% musicians. Or a folk music club where it’s musicians and singers.

I feel better there because I don’t feel I’m competing against people who are doing the same thing.

I have a very low opinion of my ability and I worry that I won’t be good enough.

I’ve not done anything outside Lancashire yet.

JOHN: Could some of them be turned into songs?

STEVE: Yeah. But, as I can’t sing or play an instrument…

JOHN: You mention Bob Williamson in the book.

STEVE: Very, very funny bloke, Bob. He was a good friend. A great friend. I carried his coffin, sadly. He and I set up a comedy club in 2000. It was called Laughingas. The same name I had used before. Peter Kay did the opening night. He had done That Peter Kay Thing and was just writing and filming Phoenix Nights at the time. He packed the place; he did an hour and a half for his 20-minute set.

The trouble was, when we set that club up in 2000 and I phoned up all the Names I used to know, they said: “Oh sorry, we can’t do it now. We’re tied-up with Jongleurs.” Or “We’re tied-up with the Comedy Store. They won’t let us do other gigs…” Well, at least, they said they had to be available for them. If I booked them and, say, the Comedy Store had a drop-out and phoned them, they had to do it.

JOHN: Why are you not running clubs now?

STEVE: I keep losing money on them  Too many people are doing them now.

JOHN: Have you been influenced by anyone in poetry? 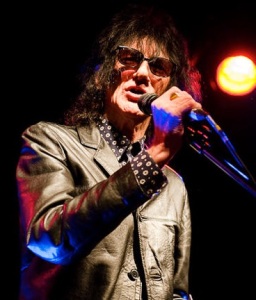 STEVE: Not particularly, but I love John Cooper Clarke. When I was into punk music in the 1970s, I thought: He’s a poet… But he is cool and trendy and listenable… It made me feel it was more acceptable to write poetry and it didn’t have to be arty-farty. My very first performance poem – it’s in the book – was I Want To Be a Ranting Poet. It was a put-down of ranting poets and now I am one at times. He is mentioned in it. I think John Cooper Clarke made poetry accessible to anyone.

JOHN: I suppose Wordsworth was a Northern poet.

STEVE: I’m not particularly interested in poets. I know very little about poets. There was a great poet on the circuit, sadly currently dead – Hovis Presley. There’s a lot of good Northern poets – like Tony Walsh.

JOHN: So you are writing poetry for ‘ordinary folk’ – but ‘ordinary folk’ get embarrassed by poetry, don’t they? They think it’s a bit arty-farty and ‘not for me’. Is there a problem about finding the audience?

STEVE: Yeah, but I run a pub, as I have done for 30-odd years. I did a launch party for the book in my pub – full of football fans, builders, rough ’n’ ready and I can’t believe how many of them bought it and liked it.

JOHN: Well, once people give themselves permission to read ‘poetry’ with an open mind…

STEVE: I sold out the first print run of the book quite quickly – I covered my costs and made a small profit – and I’m now in the process of seeing if I can get it in Waterstones bookshops.

JOHN: Is it available on Amazon?

STEVE: No, you can only get it through me at the moment.

STEVE: There’s a list of contacts in the book – My phone number, my Facebook page, my email.

JOHN: If you get on Amazon, you might find you become a cult in somewhere like Western Australia or Guatemala.

STEVE: The book is quite parochial to Lancashire.

JOHN: You think? I think it has got general appeal.

The Brook pub in Ramsbottom, near Bury, in Lancashire

STEVE: Well, the back section has poems about my home town of Bury, my time at college in Bolton, my love of Manchester and the village of Ramsbottom, where I am now.

JOHN: I don’t think The Beatles’ Penny Lane or Strawberry Fields only appeal to people from Liverpool, though.

You didn’t tailor it to a specific audience?

STEVE: I have written stuff to order. Someone asked me to write something for a wedding, to put on a plaque. And someone else wanted something about Bonfire Night. (It’s in the book.) It took me 45 minutes all in one go to write this quite long poem about childhood and Bonfire Night, which I was really pleased with.

Sometimes I can do that; other times I think over them forever. Most of my best poems come out in one go. I think the hardest thing about poetry is not the writing of it. It’s the coming up with the idea of what to write about. When I’m telling myself I have to write ‘some stuff’, it doesn’t really flow the same. It’s when I get an actual idea and a theme: that’s when it flows. It’s all about life, really – poetry and comedy. It’s about what you see and how you interpret it.

I WANT TO BE A RANTING POET

I want to be a ranting poet,
I’ve got the accent right, I know it,
Aggressive delivery of my own,
And talking in a monotone,
I’ve got no talent and want to show it,
By being,
A ranting poet.
It’s easy when you get the hang,
You don’t use big words just slang,
You don’t have worries trying to fit,
All the things you want to say on one line because in ranting poetry it doesn’t matter anyway and no one gives a shit.
No one laughs and no one smiles,
At poems that go on for miles,
So how can I make my name,
With poems that all sound the same,
Johnny Clarke did it, he showed the way,
A living legend still today.
I have to think of something new,
And give it my political left wing view,
Talk about things that have happened to me,
Nostalgia’s not what it used to be,
Or wars and crime and unemployment,
Dole queues, bus queues
Snooker cues ? Disappointment .
Walking the streets up and down all day,
Depressing everyone going my way,
No this ranting poetry’s not for me,
I thing I’ll have to leave it be,
I had a go I had my try,
I think I’ll sod off home now
Bye.

(SINCE THIS BLOG WAS POSTED, STEVE HAS BUILT A WEBSITE WHICH IS… HERE)