Yesterday, the Daily Mail alleged that Prime Minister David Cameron, when at Oxford University, put his penis into a dead pig’s severed head as part of a Piers Gaveston Society initiation ceremony.

While trying to guess the source of this story, political blogger Guido Fawkes yesterday mentioned an allegation by the Cherwell student newspaper that Michael Gove (later Secretary of State for Education) participated in a “five-in-a-bed romp” while president of the Oxford Union debating society.

The connection between politicians and sex is long-established.

“It all started last year,” Charlotte told me, “when I did the face-sitting protest. On 1st December, the government created amendments to the 2003 Communications Act so certain activities were now deemed illegal online and face-sitting was one of them. So, on 12th December, I got about 350 people outside Parliament singing Sit On My Face by Monty Python while sitting on people’s faces.”

“Fully clothed,” said Charlotte. “It was a cold day. And I did my William Wallace speech at the end: You can try and ban our liberties, but you can never take our sexual freedom. You can see the speeches on my YouTube channel.

We got support from lots of people. I’ve always had support from Lembit Öpik – and from Rupert Everett since I did the Channel 4 documentary Love for Sale with him.

“I’ve got a new petition coming up which I’ve just started to allow two independent sex workers to be able to work together for safety in regards to brothel keeping. Brothel keeping is against the law. In 2010, Labour looked at allowing 3-4 sex workers to work together. 10,000 signatures would start the ball rolling. 100,000 signatures will hopefully get me a debate if I can get the right people on board with it.”

“You’ve run for Parliament in two by-elections, I said. “Did you decide to do that as a result of the face-sitting protest?”

“No. Clacton-on-Sea was in October last year. It was a great opportunity for me to really talk about sexual freedom of expression. Then, when the second by-election came up in Rochester & Strood in November, I thought Well, I may as well. I quite enjoy it. But that is when I actually realised it’s like standing on top of a mountain screaming what you know is right yet nobody is listening. Unless you’ve got a good wedge of money behind you, you’re nothing.”

Charlotte seen via FaceTime yesterday with her latest award

“Did you meet Nigel Farage of UKIP?” I asked.

“He’s just like a guy you’d get pissed-up with in a pub. There aren’t many people where I find there’s something I dislike, but he just has such a smarmy way about him. You don’t know if he IS coming across genuine or if he’s just a people-pleaser. I think it’s his mouth. His mouth doesn’t portray honesty. You know how some people have a wiggling corner of their mouth sometimes when they lie? It’s like horses.

“I don’t like horses because their eyes have no iris, so you can’t see where they’re looking. I’m just so wary of a horse – it’s probably one of the only animals where you would never know if it’s going to turn on you. Because it’s got no iris, you can’t read it.”

“Nigel Farage,” I said, “comes across as the man next door, but he was a commodity broker, wasn’t he?”

“Then he’d make a perfect hotelier,” said Charlotte, “because normally anyone who has stocks or assets or is an accountant goes into hotels but they lack the charisma. They probably have the same level of charisma as a caterpillar.”

“How did you do in the elections?” I asked.

Charlotte made a promotional reel for her Rochester election bid.

“At Rochester & Strood,” Charlotte told me, “Britain First got 13 votes more than me. I can understand that Britain First has got some very patriotic points of view, but the majority of it was a racist, damaging stab and I thought: People would rather vote for racism than the choice of sexual expression.

“Whereas I believe, if people were having more sex, the serotonin levels in their body would be fantastic and everybody would be happy. We wouldn’t have time to be vindictive or have hatred towards people. We would be smiling more.

“Did you read that story about judges in the court system who got sacked for watching pornography at work? I would rather have my court judge watch pornography before my court case. If he’s just had a wank, I know he’s going to be level-headed, very happy and I’m not going to have a problem. I think I would specifically ask that, if I was up in court for anything, I want my judge to go and have a wank before he listens to my case.”

“Now there’s a project for you,” I said. 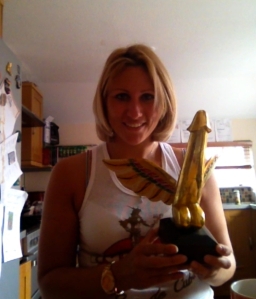 Charlotte with her 2013 Sex Worker of the Year award

“I’ve got a new project,” replied Charlotte, “called The Sex Avengers. That’s up-and-coming for January. I want to build an army of support – not a hierarchy – activists, then industry, then the public. A huge directory: a one-stop shop that people can go to.”

“If you are an Avenger,” I asked, “what’s your super-power?”

“I think to deliver strength and positivity in my speech. I’ve done a lot of speeches now and I love sharing what’s happening. But, rather than being a speech that moans, I build positivity, I build energy, I build unity. I think that’s my strength: to be able to share energy and build on positivity.”

“You have moved to London recently,” I said. “Why?”

“Well, I was already involved in The Sex Workers’ Opera and the travel time from the West Country…”

“Yes. You can see a video of me performing The Dom Song on YouTube. That was in the first ever production.”

“I’m also going to be putting on events to promote the Sex Avengers. Ben Dover is a good friend of mine and he plays the drums for a tribute band called Guns 2 Roses. It would be absolutely fantastic if I could find people in the sex industry who play an instrument and we actually form a rock band and go round all these events promoting sexual freedom through music. That would be great.”