Other people’s lives – encountering pirates and witches in West Africa

My friend Lynn is currently in West Africa.

A couple of days ago, I posted a blog based on something she encountered in Côte d’Ivoire – aka the Ivory Coast.

In fact, she had sent me a previous message last week, but I did not want to post it while she was in a particular area. The message she sent from a ship read: 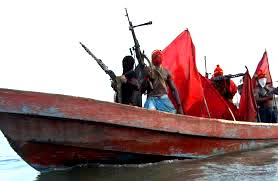 “…renowned for their ill-treatment and torture of victims”

They are seriously worried about pirates. I kid you not. Security burst into our room last night as they thought we had left a window open.

Open deck areas are all closed off and all curtains drawn so no lights are showing.

The Gulf of Guinea is where the pirates operate.

They took nearly a hundred hostages last year that are known of (many ransoms being paid secretly) and are renowned for their ill-treatment and torture of victims. They largely target oil tankers by capturing workers sailing with supplies for the tankers.

The instructions if there is an attack are mainly to go into a corridor and lie on the floor as the ship will perform “a zig-zag navigation… if the pirates succeed to board the vessel, do not panic and do as they say.”

In fact, the instructions for Military Forces boarding are panic-inducing: “Stay low to the floor and cover heads with both hands. On no account should anybody make movements which could be misinterpreted as being aggressive.”

Lynn and her husband Frank are currently in Côte d’Ivoire – the Ivory Coast… She writes: 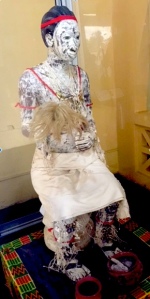 How to spot Ivory Coast witch

I may regard political correctness as an evil perpetrated by my generation but… I was just making conversation with a well-spoken, fashionably-dressed young guide after seeing witch costumes and getting a history lesson:

“So how do you deal with witches now?” I asked.

His immediate reply in a matter-of-fact tone was: “We kill them.”

“What happens,” I asked, “if you hand them over to the authorities instead?”

I was talking to one of the Killer Bitch cast yesterday and (as one who knows) he came out with the legendary line: “I’ve got no money at the moment and xxxx xxxxxxx ain’t got no money either. The bottom’s fallen out of Crime.”

Has Britain fallen this low? Sir Francis Drake made England great by robbing Spanish ships of their gold and the East India Company built Queen Victoria’s glorious British Empire on the heroin trade.

We live in difficult economic times. Or do we? Opinion varies.

A recent report said organised crime caused “an estimated £30 billion a year in social and economic harm” to the UK. I’m not quite sure what “harm” means in this context. Presumably it means there is a £30 billion black economy underpinning the ‘legitimate’ economy. But it’s all guestimates on guestimates. A recent report by the Association of Chief Police Officers claimed the UK underworld economy is now worth around £40 billion a year.

I’m more concerned that fake DVD production is now reckoned to be worth £300 million in the UK. I had vaguely hoped Killer Bitch might be fairly immune to this because I had hoped that the people most likely to rip us off were actually involved in the movie in some way – and therefore highly unlikely to rip us off. I had, however, reckoned without the international nature of modern movie rip-off-dom.

Still, I am filled with hope for the future of Killer Bitch because Michael Deeley, the highly-regarded head of British Lion Films reportedly said, when his company released The Wicker Man in 1973, that it was the worst film he had ever seen. Years later, the equally highly-regarded Cinefantastique magazine devoted at entire issue to The Wicker Man, famously calling it “the Citizen Kane of horror films”, while the Los Angeles Times said it was: “Witty & scary! No one who sits through it to the end is likely to find it easy to shake off.”

Likewise, no-one who sits through Killer Bitch with an increasingly dropped jaw and open mouth is ever likely to forget it. Bland it is certainly not.