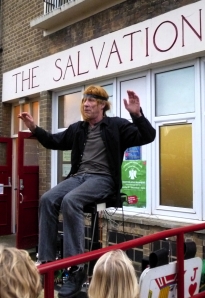 Yesterday, Martin Soan was performing outside a bizarre bazaar at the Salvation Army Hall in Nunhead, South East London.

He is off to Switzerland on Tuesday, where his Greatest Show On Legs comedy group are having a five-day mini-tour of five cities.

“I thought you were going to Switzerland with the Greatest Show On Legs?” 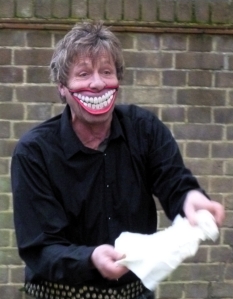 Martin Soan is going to get a new set of teeth

“Why are you going to Poland for false teeth?” I asked.

“But will they reach?” I asked. And surely the cost of travelling to Poland is…”

“No,” Martin interrupted, “because when I am in Leipzig, Poland is only a 60 Euro train trip away.”

“But you’re going to Switzerland,” I said.

Then we started talking about The Amazing Mr Smith; I blogged about him yesterday. 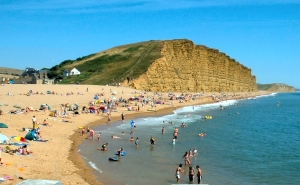 His body was found exactly a week ago – on Sunday morning – on the beach below East Cliff on West Bay, just south of Bridport in Dorset. The beach was used in the title sequence of the BBC TV series The Fall and Rise of Reginald Perrin. Mr Smith had fallen or jumped over one hundred feet off the cliff. The cause of death was “multiple injuries”.

The Dorset Echo reported: Many dog walkers and residents were shocked to find the East Beach car park full of police vehicles and an ambulance and forensic team vehicles and said it reminded them of some of the scenes filmed for the popular television drama Broadchurch last year. 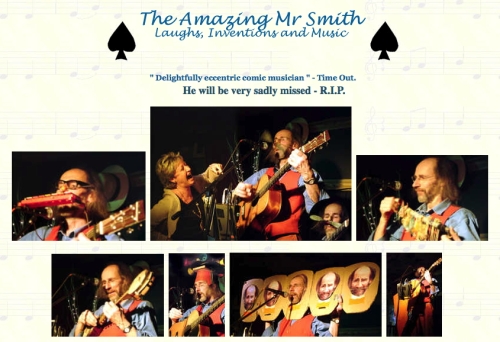 Mr Smith’s website today, with message “He will be sadly missed R.I.P.” and photos by Barry Stacey

“When I first met him,” I told Martin, “he was a research scientist – vivisection – and because – obviously – he did not want to mention that too much, we never really talked about what he did during the day.”

“He stopped doing that years ago,” Martin told me. “He did micro-biology as well, so he filled-in a bit with that and I think he made a packet of money from something-or-other. He was into the early stages of whatever-that-is. I didn’t understand it. I don’t understand it. But I think he maybe had some sort of patent.

“I knew him for years and years.” Martin continued. “I did various village hall shows with him, stayed at his house and had beautiful evenings in his shooting gallery.”

“His shooting gallery?” I asked.

“It was just gorgeous,” said Martin. “Just some of the best evenings I’ve ever spent. He had this air rifle and a bit of a garage at the back – a huge workshop for all the bizarre projects he was always doing.

“He told me: I’ve got this lovely little porcelain angel; come round the back with me. It was about six inches high with wings. So he put it at the end of the workshop and then I saw there were lots of bits of broken porcelain on the floor.

“He cocked his air rifle and said: I’m going to take the right wing off… He put a bit of music on and we just pared this angel down, shooting bits off with the air rifle. 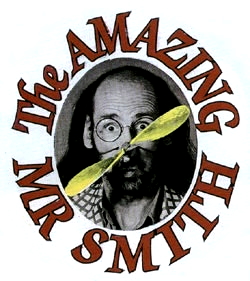 A rather shy, gentle man with propeller on his nose

“Next time you come down, he said, make sure you bring some stuff. So I brought down a little bunny rabbit and we shot its ears off. I’m going to take the bunny’s right ear off, he said. Ph-teeeww!! Then we smashed the thing to pieces with a shot straight through the heart. All these little porcelain figures. It was just so much fun.

“He was a lovely, lovely man; I had wonderful evenings with him and all we did was play music, have a few beers and shoot the fuck out of airy-fairy bunny-wunny porcelain ornaments.”

Why Roman Polanski’s glamorous rape-excusing friends should be ashamed

I once had to make a television trailer for a documentary on the Waffen-SS. It was very difficult to cut together any pictures that did not make the SS look glamorous because most of the footage was actually shot by the Nazi regime itself, therefore it had a Triumph of the Will style about it. Wonderful angled shots of smart, black-uniformed men marching down steps in formation. The Nazis tended not to film the Waffen-SS butchering men, women and children. Bad for the image.

Let’s be honest, Hitler’s Third Reich made good films and had a great sense of visual style in the design of their uniforms, their architecture and the staging of big-scale live events. But that doesn’t mean that The Holocaust was a minor matter and that Adolf Hitler “should be forgiven this one sin”.

If an argument works put into the context of Nazi Germany, then it probably works in general. Which brings us to Roman Polanski.

His glamorous showbiz chums sit around saying that he should be ‘let off’ the sex abuse charges on which he was found guilty in the US – and on which he jumped bail – in 1977. They say that he should be forgiven his trespasses because (a) he is famous, (b) he is or was a good film director, (c) he had a bad time in the War and (d) it all happened a good few years ago.

But he drugged, raped and buggered a 13 year old girl. This is no small matter and the facts are not in dispute.

If Hitler were found living in Surbiton, the fact the Holocaust was a long time ago and he had had a difficult childhood would not quite merit ignoring what was done and letting him off with a slap on the head and “Don’t do it again, you naughty boy,” said in a disapproving tone.

I recently mentioned in passing on my Facebook page that when IMF boss Dominique Strauss-Kahn, charged with attempted rape, was initially refused bail, one reason the judge gave for not giving him bail was the fact that Roman Polanski had done a runner on a rape charge.

Someone pointed out to me that the girl victim in the Polanski case “has been trying to drop charges for the last ten years… She has said that all of the publicity for this incident has hurt her more than the actual crime itself… She’s suffered enough; let it drop.”

Well, if Hitler were found living in Surbiton, the fact that the Holocaust was a long time ago and the people who suffered would be upset by a trial would not affect what crimes had been intentionally committed.

The fact Polanski’s original trial judge in 1977 was running for public office, desperate for self-publicity and sounds like he changed his mind on giving Polanski a custodial sentence does not enter into it. I imagine some of the judges at the Nuremberg Trials were scumbags; it does not mean that Nazis found living in freedom 30 years later should not be tried.

My bottom line is that, if you drug, rape and bugger a 13 year old girl and then flee abroad to escape a custodial sentence, you deserve to be imprisoned for a considerable time. The fact glamorous showbiz names champion Roman Polanski and, in effect, say he should be pardoned for artistic merit nauseates me. Hitler was a painter and commissioned good movies. I don’t think his artistic merit or the artistic merit of Leni_Riefenstahl enters into it.

You can read the 37 page transcript of the Grand Jury proceedings against Roman Polanski in 1977 HERE.

According to the girl’s testimony, after giving her champagne and a Quaalude, Polanski sat down beside her and kissed her, despite demands that he “keep away.” He eventually, she said, “started to have intercourse with me.” Later, he asked the 13 year old: “Would you want me to go in through your back?” before he “put his penis in my butt.”

Asked why she did not more forcefully resist 43 year old Polanski, the teenager, who was 13 at the time of the rape, said: “Because I was afraid of him.”

The girl sued Polanski in 1988, alleging sexual assault, intentional infliction of emotional distress and seduction. In 1993 Polanski agreed to settle with her and according to the Los Angeles Times he agreed to give her half a million dollars. Reportedly, she was still trying to get part of this money from him in 1996 but she and her lawyers later confirmed the financial settlement was completed.

The girl publicly forgave Polanski in 1997, twenty years after the rape and buggery.

In 2009, Lech Walesa, former President of Poland, argued that Polanski “should be forgiven this one sin.”

I say fuck him.

Details of what was in Polanski’s 111 page Polish Secret Service file are HERE.