Martin Besserman was up to more Monkey Business last night

“This year,” he told me, “it’s in the Glasshouse Room in the Holiday Inn, Camden. And I’ve booked the room for New Year’s Eve as well.”

“A Jewish Christmas show?” I asked.

“Jews traditionally love going out on Christmas Eve,” he explained. “I don’t know why that is. They drink Coca Cola or coffee, not alcoholic drinks. They love their entertainment, then they go home and eat cake.”

“How do you make the show Jewish AND Christmassy?” I asked.

“It’s primarily Jewish acts – Adam Bloom, Lewis Schaffer, Lenny Beige, Simon Schatzeberger as Woody Allen – and it coincides with it being Hanukkah. It’s not compulsory to be Jewish to come in. I mean, we’re not going to check your schmekel…”

“It’s exactly what you think it might be,” Martin told me.

“You’ve been in the show business a while,” I said.

“When I started off,” Martin told me, “I was 15, I joined a theatre group, performing in Parliament Hill. I always wanted to entertain. You’ve blogged about my days at Speakers’ Corner. Then I was in a band. We were put on with guys like The Pretenders and Depeche Mode.”

“You were glam rock?” I asked.

“I’ve done punk, everything,” said Martin. “My first gig was at the Electric Ballroom in Camden: I was the only support act for Adam & The Ants: we had the same manager.”

“What were you called?” I asked. 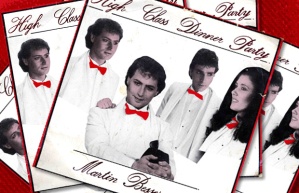 Young Martin Besserman… was a glam man of music

“Just Martin Besserman. Sometimes I had a backing band. Sometimes I went on as a solo poet. I even went to 10 Downing Street and complained about my housing conditions to Mrs Thatcher. She made sure I got re-homed. Her Press Secretary got in touch with me and told me she had looked at my housing situation and, three weeks later, I was offered a new place to live.”

“What was wrong with your housing situation?” I asked.

“I was four flights of stairs up,” explained Martin, “and every time I needed to go to the toilet I had to go downstairs but sometimes I couldn’t be bothered and did it in a bottle and poured it out the window. I did a lot of campaigning poems in those days. I did one about chickens in Petticoat Lane, because I was a vegetarian.”

“When did you start being a vegetarian?”

“In my twenties… In those days, chickens were sold in public and people would grab hold of the chicken and mishandled and I was very upset about that as an animal lover. It was horrible. They would chop their heads off in public in Petticoat Lane. So I got in touch with the Daily Mail and I also got publicity on Capital Radio. I wrote a poem about it:

“So you were a vegetarian?” I asked.

“I am,” said Martin. “I love animals. I don’t feel we have the right to abuse them in the way we do. I often see people campaigning for Corbyn – all the injustices in the world – and some of those injustices that they’re talking about have a lot of credibility. I understand that. But they’re the same people who will think nothing about being part of the mass murder, suffering and exploitation of animals. I don’t want to be part of the pain and suffering.”

Have a Besserman Jewish Christmas…

Have a Besserman New Year’s Eve…