Chris Dangerfield: heroin in a train toilet and the comedy gig from Hell 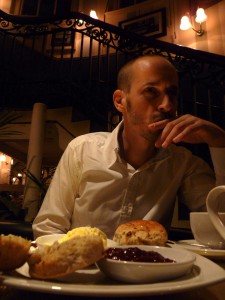 I met comedian Chris Dangerfield in Soho yesterday. He said he wanted me to publicise his comedy gig in Swansea this weekend and I thought Well, he always has some interesting stories.

But he sounded more than a bit distracted when I phoned him up at 5.00pm yesterday afternoon from Leicester Square.

“Things are a bit up-and-down,” he replied. I’ll come down and see you.”

He lives in Soho.

“Perhaps tea and scones?” I suggested. “It seems suitably British.”

So we went to Browns in St Martin’s Lane. The waitress had not heard of scones and said she was only working there for a week. She was from Lithuania. But she asked someone else and some very nice scones, cream and strawberry jam duly arrived.

“So,” said Chris, “me and Trevor Lock done this living room tour which I told you about before. We went round Britain doing comedy shows in people’s living rooms. Really successful. So we thought…

“Well, years ago, I was in a rock band called Household and a girl called Mel had set up a company that done all the merchandising for Radiohead. A lovely, lovely girl. I kept sending her demos just on the strength of her connection with Radiohead. And then suddenly, one day, she said: I’ll manage your band. And, at that time, Chas Smash (Carl Smyth) of Madness had a record label called Rolled Gold and they – the record label people – came to our first gig – we pretended we’d done loads – and they signed us.

“So we had the management deal, we had the recording deal and we also had someone set up for the publishing deal. So there was a big night when all the music industry people were there to sign forms and contacts, but I preferred to sit in a train toilet, smoking crack and injecting heroin with a girl. So we got dropped very quickly. I ruined it and we lost it.

“Four or five years later, when I’m clean, I decide to contact Mel and say I’m so sorry about what happened there. It’s part of my recovery to make amends to people and I think it’s a beautiful thing. It really is, you understand? She tried her best for me and I let her down.

“I met her in London for tea. By now, her son was a comedy fan and she said: Would you do a benefit gig for his school? Because they wanted solar power and needed to raise money. It seemed like a nice idea so I said Yes and I’ll probably be able to get Trevor Lock to do it as well. She knew Trevor through Russell Brand’s radio show.

“So we went up there to the school and done this amazing gig – for the adults, obviously, not for the kids. Then, on the drive home, me and Trevor realised there are loads of schools that, essentially, have an empty hall, heating, lighting and a stage. They’re usually the right size that you don’t need a microphone… Ideal comedy venues… So we decided to do a schools tour.

“We contacted loads of schools and said to them: Look, we want expenses and a bit of money but we’ll do a half rate so, if you can sell 100 tickets at £10 a head, after paying us you’ll still have a decent amount. We put together a very good presentation but no-one was interested, which seemed very strange to us, because we could promote it. Between us, we’ve got 30,000 followers on Facebook and Twitter in different parts of the country. The schools could get their PTA involved. It’s a fund raiser. But no-one was interested.

“Except this one school in Poole, Dorset, did agree. So, last week, we went down there.

“When we set up the schools tour last Spring, I had a variety of different comedy material. Some it was more appropriate for different areas but, after doing 30-odd performances of my show Sex Tourist on the trot for the Edinburgh Fringe this August… well, that’s all I have in my brain at the moment.

“So we go down to the school in Poole last week… Trevor goes on stage to introduce me and they love him because he’s lovely and he’s a great comic. He’s exactly what they want. He’s friendly and kind…

“Then I go on. I’m already worried. They’re an adult audience, but I know they’re not my type of audience. I would never blame an audience. I don’t believe in that bad room/tough audience shit. You either make people laugh or you don’t. If you don’t, it’s not a case of failing or succeeding; it just hasn’t worked for a multiplicity of reasons.

“But I was scared and, when I am scared, I either want to crawl up into a ball or attack and it’s usually attack and I am hostile. So I go on stage and I’m very aggressive with my opening line and… well, if it’s my type of audience and they know they’ve come to see Sex Tourist, they’re fine with that, but I went straight into it… and, well, a lot of people in Poole did not like it.”

“So what was your opening line?” I asked.

“I said something like that which is OK but, if it’s said without any humour and said without them liking you… You’ve just turned up at their school and been a horrible, horrible man talking about sexually transmitted diseases.

“And it went downhill from there.

“People started walking out. Not just walking out as in Oh, I don’t want to hear this, but protests. A whole table looked at each other, nodded and walked out. Hands over faces. People mumbling.

“A woman heckled me and I just went for her so viciously… Hilariously if you were up for it… but none of them were. And they were quite right. I cut her no slack. I used all the tricks a comedian knows to put someone in their place, but she hadn’t really been… It was a disproportionate response. And then I said: I should just go, shouldn’t I? I should really just get off stage now. And they all just went Yes. They were not yelling Yeah! Get off!! Just politely and calmly like they were saying Yes: you have brought an ugly thing to our town.

“So, as I walk off, there’s already people complaining to the woman who organised the night and to Trevor, who is trying to explain: Well, comedy… It’s all a taste thing…

“He’s there being cute trying to explain it.

“I am thinking That was bad.

“I have never set out to offend anyone. I want to make people laugh.”

“That is always an admirable thing,” I told him.

“So then there’s an interval,” said Chris. “And usually, at the start of Part Two, I bring Trevor on, but instead I say to Trevor: I’m going to go on and apologise.

“Complaints are already being made to the lady who organised this. All she has done is try to raise some money for your school… I have insulted you… If you want to make a complaint, complain to me. This is my e-mail address. This is my Twitter account. I’m very sorry.

“And, weirdly, they started laughing. I said, I normally bring on Trevor and tell you that he taught me how to do stand-up, but I don’t think that’s…

“…and they were laughing. And I sort-of won them round.

“I said: I just want to apologise. I hope your night isn’t ruined.

“And I got one of the biggest rounds of applause I’ve ever, ever had.

“So then Trevor goes on and does well. The night is not ruined. And, afterwards, a lot of people Followed me on Twitter and said they loved it. But Trevor is annoyed:

“I did a bloody good gig! he tells me. And, in five years’ time, you’re the one they’re still going to be bloody talking about!

“So it was a weird night, but not as weird as what happened today.”

“Partly,” Chris said. “So, you know about my well-documented drug habit…”

TO BE CONTINUED IN TOMORROW’S BLOG…

Comedian and actor Matt Roper recently told me a story about defiantly adult Bernard Manning being considered for  the 1972 movie Alice’s Adventures in Wonderland – I blogged about it last week. Matt is up to his ears moving flat today, then straight off for three weeks of summer festival performances – firstly at Glastonbury, then Lushfest in Poole and then the Maker Sunshine Festival in Cornwall.

But as the son of George Roper, star of 1970s ITV series The Comedians, he grew up with the old school comics and their chums.

“There are tons of stories about the old school,” he tells me. “I never really think about it all too much as my contemporaries are quite young still and don’t really know who most of these guys are. The slightly older generation of alternative comics of course do. I got sick of defending the new school to all the old school and vice versa. They’d hate to hear it, and I’ve thought about it for a long time, but they have more in common than in difference.

“People sometimes tar all of those old school comics with Bernard Manning’s brush. It’s hard, having been so close to my father and loving him for his gentle mind and manner, to hear him being lumped in with all the stereotypes about Northern racist comics… Somebody said to me recently that “Bernard was all about the darkness and your father was all about the light” which was very sweet but makes me think – Never mind Alice’s Adventures in Wonderland, they should’ve been cast in Star Wars!”

One source of stories when Matt was a kid was legendary Granada TV producer Johnnie Hamp.

“He was full of interesting stories which I soaked up happily like a sponge.,” says Matt.

“My favourite story is of when he and his wife were in bed, at home, asleep. It is 2.00am when the phone rings. It’s John Lennon, out on the tiles in Manchester after a TV recording. He asks if Johnnie is coming out to play.

“No, says Johnnie, I’m in bed, asleep. But, if you have any trouble getting anywhere, just mention my name.

“As if John Lennon of the Beatles would have had any problem getting into a club and have to resort to name-dropping!”