After yesterday’s blog about Broadmoor, Anna Smith – the So It Goes blog’s occasional Canadian correspondent – shared these three memories: 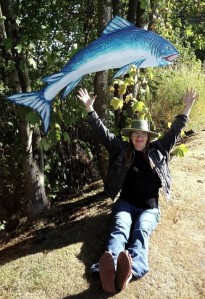 One time a few years ago I was visiting a club in Vancouver for mental patients. At the time, it was known as The Mental Patients’ Association – The M.P.A.

It was and is a drop-in centre and resource for mental patients in Vancouver with activity rooms, a pool table, access to computers, free coffee all day, shower facilities and inexpensive meals.

One of the habitués back then was an Iranian who had made a deal to supply the place with free cigarettes. He had persuaded a cigarette company that the M.P.A. was a ‘special’ club – The Members of Parliament Association.

So they got free cigarettes.

A Kazak friend of mine – a big, stupid young kid – was working on a building site near the Mental Patients’ Association. He used to get annoyed because the mental patients would wander over and leave their coffee mugs littered around the alleyway near where he was working.

They would get their free coffee and then wander out of their building, all buzzed, leaving coffee mugs on top of mailboxes and all around the neighbourhood.

So the building site’s foreman said to him: “Fyodor, tell those bums not to leave their mugs all over the street; it’s a hazard.”

Next time he saw a mental patient set his mug down beside the dumpster, Fyodor ran towards him, howling, waving his arms, successfully scaring the guy away.

The foreman had to have another word with him: “Fyodor, I said to tell them. I didn’t say to scare them. One of those bums could get a heart attack. Be nice to them. One of them might be a Kazak.”

“No,” said Fyodor. “They are not Kazak. All the Kazak bums, they stay in Kazak.”

The Mental Patients’ Association was and is a very interesting place to have a conversation.

There was an English mental patient who attended the club. He was an ordinary-looking bloke and we never exchanged more than pleasantries, except on one occasion, when the subject of Margaret Thatcher came up. We both agreed that we did not like her – or her cronies.

“The one who really frightened me,” said the English mental patient. “was Michael Heseltine,”

I agreed with him.

The English mental patient told me: “I met him in the woods one time.”

How, I wondered, had this forlorn, nondescript little man encountered one of the most infamous and reviled politicians of 1980s Britain?

“Why were you meeting him in the woods?” I asked warily.

“I didn’t intend to meet him,” the English mental patient told me. “I was just going for a walk in the countryside and he suddenly appeared in front of me on the path. I was so shocked. All I could say was You are Michael Heseltine!… What are you doing here?

“He answered: Yes I am Michael Heseltine and this is private property. What are you doing on my land?

“I told him I was just going for a walk and that I had no idea that it was his land.

“This is my property, he told me, and you had better get off it at once. He was not very nice about it. I never liked him after that,” the English mental patient told me.

I have happy memories of the Mental Patients’ Association club, which has now changed its name to the more politically-correct Motivation Power and Achievement club.

It still does good work, but it no longer doles out free cigarettes.