Tony Blair’s Muslim sister-in-law is performing at the Edinburgh Fringe.

Lauren Booth, Tony Blair’s sister-in-law, was a very vocal opponent of the 2003 Iraq War and a supporter of the Stop The War Coalition.

She is performing Accidentally Muslim at this year’s Edinburgh Fringe.

She trained as an actress, became a journalist and converted to Islam in 2010.

Her father was actor Tony Booth, who became famous as the Left Wing son-in-law of Alf Garnett in BBC TV’s sitcom Till Death Us Do Part.

Accidentally Muslim is a dramatisation of her 2016 memoir Finding Peace in the Holy Land.

JOHN: Do you still exchange Christmas cards with Tony Blair?

JOHN: So you are persona grata…

LAUREN: Ehhh… Well, I think there’s a lot of love in the family.

LAUREN: Yeah. Her father, my grandfather, was Jewish.

JOHN: Was her mother Jewish?

JOHN: So she’s technically not Jewish.

JOHN: There’s a lot of stuff at the moment about anti-Semitism in the Labour Party. Can someone be anti-Israel without being anti-Jewish?

LAUREN: I’m not going to go into that, because that’s not in my show.

LAUREN: It’s not the same at all.

Lauren in Iran with an anti-Zionist Rabbi and Christian priest

LAUREN: Because you can be against a political regime without wishing harm on people who follow a faith. There are Zionists who are not Jewish and it’s the political ideas that people protest against.

JOHN: Why are you an ‘accidental’ Muslim?

LAUREN: Because things kept happening to me that pushed me in one direction until, one day, I pretty much woke up and went: Whaaaaat?? – Oh! OK! Right!

Some people will go and read and study for six years. Other people will just accept a faith. But I was resisting. I was like: Nice food, but no thankyou. And… it just happened.

JOHN: You saw a report on TV in 2000 of a boy who got shot in the Gaza Strip and then you accidentally found yourself in his village.

JOHN: Are you Sunni or Shiite?

LAUREN: I just say I am Muslim.

JOHN: Can you be?

LAUREN: You can, because everything is between our hearts and the Creator. I just think it’s really disingenuous and unhelpful to get involved in sectarianism.

JOHN: Don’t people say: “You have to be with us or them”?

LAUREN: Yes, unfortunately that happens and that’s why I don’t go into it.

JOHN: How do you spell the faith? Moslem or Muslim?

LAUREN: Muslim. Like the word mosque. You know the origin? Apparently the colonial troops in India described the people flocking to their religious building as mosquitos – that eeeee sound. There were thousands of them and you didn’t want them, so that’s why it’s ‘mosque’. Most Muslims refer to it as ‘masjid’.

JOHN: You were born Sarah Jane Booth. So where did ‘Lauren’ come from?

JOHN: That is rather creepy. You have a doppelgänger!

(LAUREN HUMS THE THEME TO THE TWILIGHT ZONE)

LAUREN: I just plucked ‘Lauren’ out of the air.

JOHN: Accidentally Muslim is billed as a play in the Theatre section of the Edinburgh Fringe Programme. Is it a play or a monologue?

JOHN: So is it a monologue about how we should all become Muslims?

JOHN: But it’s going to be a terribly serious talk about death, destruction and…

LAUREN: Well, I’ve just come out of rehearsals for it and we’ve been roaring with laughter for 30 minutes. It has some real light and shade in it.

JOHN: You have a director for the show. You started as an actress, then became a journalist. You can write and you can act. Why do you need a director?

LAUREN: It would have been such an act of arrogance to have come back after 26 years of not being on the stage as an actor and say: “I can do this on my own!”… It would have been a catastrophe. I wanted to dramatise the story and make it ‘live’. It has a soundscape and visuals and lighting cues and I play twelve characters. So it’s very much not a lecture.

JOHN: So it’s not a monologue: it IS more of a play.

LAUREN: Is it a one woman dramatisation? Does that work? One of the characters I play is Billy Connolly.

JOHN: If you have to cover your head for religious reasons and you don’t have a beard, how are you going to do that?

LAUREN: You’ll have to see the play to find out.

JOHN: Good PR!… So the play is a coming-together of your skills as an actress, journalist, world traveller…?

LAUREN: You know, going through these rehearsals, it’s a story of somebody who’s by chance at certain pivotal moments in history and has certain realisations along the way. It covers 40 years, 12 characters, 2 faiths and 2 or 3 continents.

JOHN: Which continent is the Middle East in?

LAUREN: It’s a totally Orientalist term. The Orientalists said Britain is the middle of the world and everything else (beyond the English Channel) is East, so it is the Middle of the East.

LAUREN: What about calling it Middle Earth?

JOHN: We would have to worry about the Nazgûl coming in. Talking of which, among others, you wrote for the New Statesman AND for the Mail on Sunday. There’s a – eh – mixture of politics in there.

LAUREN: Well, my politics was always the same. I like to tell myself that the Right Wing paid for my Left Wing pretensions. But I don’t know if ethically, looking back, that really works. Can you take quite so much money off Associated Newspapers and still be Left Wing? That’s up for debate. But I wrote what I wanted. They did give me free rein and I did get some good stories that I wanted in because I used to stand-in for Suzanne Moore: hardly a bastion of the Right.

I described doing that kind of job as being an aquifer for hatred for Middle England.

JOHN: …and at the New Statesman? The type of stuff you were writing was…?

LAUREN: I would call myself  “a chronicler of London society” at that time. 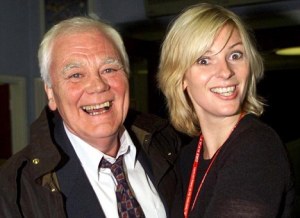 JOHN: Someone said, when you converted, you had moved “from hedonism to hajj”. Your dad, actor Tony Booth, was very Bohemian.

LAUREN: Well, we are all products of our childhood and my dad taught me an awful lot. He taught me how to roll a spliff that would look like a cigarette.

LAUREN: It was the only place to get out some really good information about Palestine.

JOHN: You spend a lot of time in the Middle East?

LAUREN: I haven’t been for five years. I’m hoping to go back to Qatar. I can’t really get into Gaza at the moment. The last time I went through Israel was 2009. The problem with getting into Gaza is you can’t get in through Egypt. You have to go in through Israel.

JOHN: Do you personally, specifically have problems getting into Israel?

LAUREN: I haven’t so far.

LAUREN: Because it was adventure. The only thing that scared me was bungee jumping and I did three… Three!

JOHN: The viewers voted that you had to?

JOHN: You are always going to be tarred with Tony Blair… but the good side is you will always get coverage out of it.

LAUREN: It’s not about coverage. I have no issue with it having been a door-opener. At certain times, you have to say: That door was absolutely opened because of it. What you do when you get inside, though, is what defines you. So I am very grateful for that and I hope I’ve used it for good and made some points that needed to be made and told stories for people who don’t normally get their stories told.

LAUREN: Can I have that for the play?

The printed book is dead… and libraries… and newspapers… but literacy lives on my iPad!

I was in the Apple Store in Regent Street last week and bumped into the multi-talented transsexual comic Shelley Cooper, who has almost finished writing her autobiography – now THAT should be a cracking read. She is thinking of publishing it online via a print-on-demand site.

I am also thinking about re-publishing the late comedian Malcolm Hardee‘s autobiography I Stole Freddie Mercury’s Birthday Cake as an online print-on-demand book. The costs are so low as to be negligible and the percentages to the writer are much higher – on a traditionally printed paperback book the author usually only gets 7.5% of the cover price. People can buy a print-on-demand book as a well-produced traditional paperback or download it from iTunes or Amazon.

Traditional paper books and physical libraries in towns and cities will soon be dead. A book is not bought because it is an object, it is bought an experience or for information. Content is king. The printed word is not dying – it is thriving on Facebook, Twitter, Wikipedia, mobile phone texting, everywhere. But the printed book will die.

The husband of a friend of mine is the straightest person I know. For many years, he never watched ITV – only BBC TV -because ITV was not respectable, merely a young whippersnapper upstart TV station. Yet he is now thinking of investing in an iPad or the duller and much more limited Kindle because, that way, he could take a whole library of books with him on holiday and read anything he likes when he gets there.

Ultimately, Project Gutenberg and its ilk will put almost all out-of-copyright fiction online; and Wikipedia and Google and the web in general give ultimately unlimited access to known facts. Yes, there are old books, newspapers and magazines with content which cannot be accessed online, but only because they have not yet been digitised.

Online publishers have no reason to ever declare any new ‘book’ out-of-print because the online file can remain in cyberspace forever at no extra production cost. The traditional paper book is dead and so are traditional physical libraries.

A library is just a building to keep books in. Unless they re-invent themselves as leisure centres for the printed word and computer gaming, they will soon be dead too.

What is worrying the printed media industry more immediately, of course, is what is happening and what will happen to newspapers, whose printed, paid-for editions are sliding down a seemingly bottomless pit in circulation terms.

Newspapers were always printing yesterday’s news but there used to be no alternative.

But why should I buy a print newspaper carrying out-of-date news when I can watch live street demonstrations in Cairo or around the Middle East on 24-hour live TV news channels? Why should I buy a UK newspaper when I can read other UK news sources free online and get access to Australian, Chinese, Russian and US print sources free online? AND watch Al Jazeera, BBC TV News, Sky News, Press TV from Tehran or, god forbid, the terminally dull Russia Today channel direct from Moscow?

On my iPad, I have apps giving me access to the Huffington Post, the New York Times, USA Today, the Straits Times and the Moscow Times. I can access a wider variety of sources worldwide via my Fluent News, Pulse News and Stuff apps. I get daily news update e-mails from The Scotsman and from China Daily.

Why should  buy a newspaper except for a free DVD?

On the other hand, Rupert Murdoch’s launch less than a couple of weeks ago of his iPad-only newspaper The Daily is interesting, though it is only available le in the US at the moment. If, as rumours say, he really does price a future full UK daily electronic newspaper automatically delivered to you every morning at a cost of only 79p per week…

Well, even I might be tempted… but it’s still going go be news I can get elsewhere for free.