Having a hearty breakfast with Mr Twonkey

I met up with Malcolm Hardee Comedy Award winner Paul Vickers aka Mr Twonkey over breakfast to talk about his show Twonkey’s Night Train To Liechtenstein but, initially, we got sidetracked by the three gigs he recently played at the Prague Fringe – in the Museum of Alchemists.

PAUL: It’s a lovely place. It’s got a lot of… not waxworks… fibreglass dummies of alchemists.

Mr Twonkey was a cover star at the Prague Fringe

PAUL: Oh, it’s a beautiful place. we always give money to the Infant Jesus of Prague. They change its clothes every day; it has different jackets and stuff. The more money we gave, the busier the show got.

JOHN: Did he bleed more if you gave him more money?

PAUL: He doesn’t bleed, but he smiles. He is in a little glass box in a little church just over the Charles Bridge. He is small, but he has big fluffy coats and very flamboyant clothing.

JOHN: It’s not a small statue of Liberace, is it?

PAUL: It does look like Liberace, but it’s Jesus. It’s one of those things like his eyes are following you round the room.

JOHN: His stigmata are following you round the room?

PAUL: Yeah. But the more money you give him, the more people come, you know?

JOHN: Anyway, you are performing your Twonkey’s Night Train To Liechtenstein at the Bill Murray venue in London next Thursday. Is that the same show you did in Brighton?

PAUL: Slightly but not totally different. It’s finding its feet. I have different terms for my shows now. The current show is an Arrival show. But I also do Gateway shows.

JOHN: What are they?

PAUL: A Gateway show is where you find a way in or a way out. With creative ideas, I find sometimes you get trapped. You get a formula for doing something and then, over time, that formula becomes stale, so you feel trapped by it. A Gateway show shows you don’t actually have to do it like that.

In another show, Mr Twonkey spent Christmas in the Jungle

You experiment with a new format and, if that works then, after that, you can have an Arrival show which I think is the most exciting type but it’s also potentially The End. In which case you need another Gateway show. Unless I have two Arrival shows, which is what I’m thinking.

I wonder if that’s possible.

JOHN: Maybe Liechtenstein will have a fire escape.

PAUL: Yeah. That would be great: if I could have two Arrival shows.

JOHN: …and a fire escape show, like West Side Story.

PAUL: It makes sense in my head, but…

JOHN: So what you did before feels a bit stale to you now?

PAUL: Well, my first three shows – Twonkey’s Cottage, Twonkey’s Castle and Twonkey’s Kingdom – were like a trilogy and the idea was I was only going to do that. I was telling the story of the mythical character Twonkey. But the trouble was no-one understood what I was going on about; no-one was following the story. In some respects, you had to have seen the show before to fully understand the threads in the other show.

JOHN: What was the over-all narrative of the three shows?

PAUL: It was following the journey of Twonkey, who was an accountant… well, a dragon, really… Basically, a dragon who moved from a castle and got more and more powerful. He started off in a cottage, then had his own castle, then had his own kingdom.

Mr Twonkey had a colourful and successful Blue Cadabra

Then I broke away. I killed Twonkey off after the third show. So the dragon died and I became Mr Twonkey. I became the essence of Twonkey. What I realised was that Twonkey was not a dragon but a state of mind. That freed it up. I had a Gateway show – Twonkey’s Blue Cadabra – which I had quite a bit of success with.

After that, I did a series of shows in that kind of formula…

PAUL: Eh… How many were there?…Two?

JOHN: You’re not quite sure?

PAUL: No. I did Twonkey’s Private Restaurant, which was an extension of Cadabra. In Twonkey’s Stinking Bishop, there was a log flume park. Then Twonkey’s Mumbo Jumbo Hotel was the one I got the Malcolm Hardee Award for. That was a Gateway show, because that was the first time I introduced the idea of an interwoven narrative throughout the over-all piece.

I have carried on with that since and the new show – Twonkey’s Night Train To Liechtenstein – probably has the most clear narrative I’ve had.

JOHN: And you are doing that at the Edinburgh Fringe in August?

JOHN: Are you playing Fringe By The Sea in North Berwick while you’re up in Edinburgh?

PAUL: Yes, but not as Twonkey. I’m doing my band stuff. Paul Vickers and The Leg.

JOHN: Your band is active again?

PAUL: Yes. We are recording an album at the end of June.

Paul Vickers (right) and The Leg: part of a body parts boom

JOHN: Why are they called The Leg?

PAUL: There was a boom in Scotland of bands named after body parts. There was Wounded Knee; there was Withered Hand; and so there was The Leg. There was also Frightened Rabbit.

PAUL: No. Not a body part. But it fits in somehow.

PAUL: No. Sitting in chairs and speaking to people.

PAUL: Well, he had the reputation of spitting a lot… on Spitting Image… My girlfriend is making a seagull at the moment.

PAUL: My girlfriend is making a seagull at the moment.

JOHN: As a prop for your Twonkey show?

PAUL: She says it is. Though I haven’t got anything with a seagull in my act at the moment. 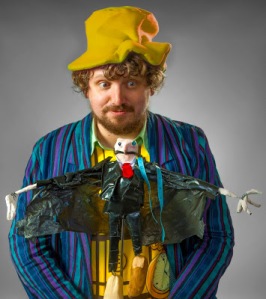 Paul/Twonkey has been known to use occasional props

JOHN: She makes your props.

PAUL: Some, yes. And Grant Pringle makes the bigger ones.

JOHN: Is he related to the Pringles crisp dynasty?

PAUL: No. I think he is related to Pringle The Slayer.

PAUL: Pringle The Slayer was a Borders Reiver. He had people locked up in a tower near Galashiels. I wrote a piece about Pringle The Slayer for Border Life magazine. I used to write for that. We interviewed David Steel for that too. Local interest. I also did Border X-Files, which was about  aliens and ghosts.

JOHN: That was a separate magazine from the one David Steel was in?

PAUL: No. It was all local interest. There was a lot of going to manor houses and talking to rich old ladies and there were photos of horses and green fields. It was the most successful thing we did after the music magazine failed. When BritPop deflated, the music magazine went down and we went into local publishing. But then the band took off and we were alright.

JOHN: What was the music magazine called?

JOHN: Ah. How are you enjoying your baked beans?