(This piece was also published on the Indian news site WSN)

Honestly! I had to have breakfast in Kiev to hear about the current protection rackets of Glasgow gangsters and Glasgow Council officers. Other people’s lives! 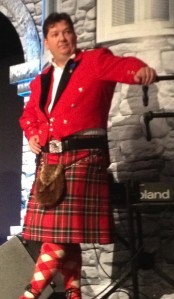 Stuart McKenzie – master of highly spectacular events in the Ukraine

But, really, I was in Kiev to attend the annual Burns Night celebration which, it seems, is never held anywhere near Burns Night in the calendar.

The only thing I can say about it is that Stuart McKenzie (stepson of the late Scots comedian Jimmy Logan) sure knows how to throw a charity party. I was at last year’s celebration, which was wonderful, but this year he has outdone himself.

The Lions Club in Kiev is the biggest in Eastern Europe and, judging from last night, no wonder they manage to raise around $300,000 every year for charity, with this annual event contributing mightily. 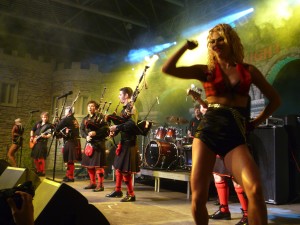 Plus 38 ‘silent’ auctions in which people bid for everything from a $500 Muhammed Ali autograph to a $3,000 two-day training prize for up to 15 people… plus ten ‘live’ auctions which started with an $11,000 bid and ended with the auction of a $23,000 holiday-for-two in the Seychelles (all money going to charity). 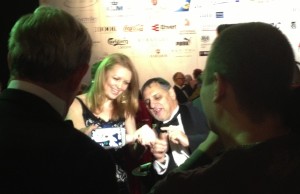 Fred had also arranged for the magician Zap to perform table magic during the show. I am ashamed to say I had never seen Zap before but, as a close-up magician, he is flawless. One trick involves taking a low-value note given to him by a punter and changing it into a high-value note ‘before your very eyes’.

Fred told me: “I took Zap to Kenya where he changed low bills into high ones and some of the guys there got a bit rough and took him outside to make him do it for all their money. And then there was the occasion with the UK celebrity where he turned £5 into £50 and the celebrity just walked off with the £50…”

The six hour long but astonishingly fast-moving Burns Night event yesterday evening was quite something.

I was on an interesting table with, among others, Andrei Trilev, founder of the ultra-glossy Profiles magazine. He is a man unafraid to join in the fun.

And let’s not even mention the Scots croft in the foyer, the Scots castle set on stage or the live sheep.

He has been in Kiev since 1994 and his company interests now include entertainment, events, logistics, marketing, property, research and training and his attitude is far from that of the cliché dour Scot.

“The best marketers are in the game early and are always on the lookout for the next selling opportunity, the latest trend, the next unmet need. It’s enough to keep you awake at night – but from excitement, rather than from fear.

Some of The Clann members fighting during last night’s show

“My crystal ball has been in the repair shop for a long time. I have absolutely no inkling of what the future holds. Don’t ask me what the trends will be in 2015. I do not have a clue. I can say this, though, with absolute certainty: the future will be glorious for the optimists; the creative marketers who will set the trends and stand to profit from the opportunities that they represent!”

It was announced that, after 18 years of being involved in organising this annual Burns Night celebration in Kiev, it may be Stuart McKenzie’s last. If so, Kiev social life and local charities will be poorer for it. 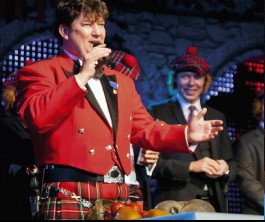