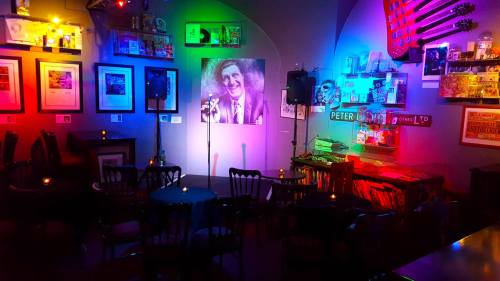 In London, there are loads of free ‘new material’ comedy nights. This often means inexperienced comedians turn up with half-written, half-baked half-ideas and the evenings can sometimes be more endurance test than entertainment.

One exception is the (in my experience) consistently good and – amazingly – free Monday Club show, held in The Museum of Comedy on – well – on Mondays.

The Museum of Comedy is a random collection of comedy memorabilia and a well-designed performance space in a crypt under St George’s Church in Bloomsbury.

It (The Museum of Comedy not the church) is owned by the Leicester Square Theatre and this coming Monday is the 1st anniversary of The Monday Club.

So yesterday I chatted to David Hardcastle, who (with Tony Dunn & Patch Hyde) organises The Monday Club and runs comedy competitions for the Leicester Square Theatre and the Museum of Comedy.

JOHN: The majority of new material nights in London are – well – not very good but you always maintain a high quality. Genuinely.

DAVID: I hope so. It’s mostly invitation only – some people get in touch, but they have to be of a certain level. Because a lot or some of the acts know each other, there’s a sort of support group AND competitive element in it: they HAVE to write something new for it, otherwise people will know they’ve been lazy.

JOHN: What is your actual title at the Theatre and Museum?

DAVID: Well, originally, at Leicester Square, we just ran the one competition and now it’s the Leicester Square Theatre AND the Museum of Comedy AND the Great Yorkshire Fringe – and there are four competitions within them, so I’ve sort-of invented my own job.

One of the reasons for The Monday Club is we used to have people coming in through competitions but then we had nothing else to give them; no way of supporting them by giving them stage time unless they came back and rented the space to do a preview. So it’s hopefully a way of keeping those people in the loop and involved in the venue.

DAVID: Now it’s called the Not So New Comedian of the Year.

JOHN: And the title was changed because…?

DAVID: A lot of people refused to enter a competition that had the word ‘Old’ in it. It is for comics over 35 years old and people argued 35 is not old enough to call anyone old!

JOHN: I say just give it to Lynn Ruth Miller every year: she’s 85!

DAVID: Well, she MCs it every year now.

JOHN: You sometimes MC at The Monday Club yourself, but not always.

DAVID: I quite enjoy it when I do it, but I never particularly want to do it.

JOHN: You’re not frustrated by putting acts on but you’re not one of them?

DAVID: You perform comedy and you reach a stage where you are sort-of competent but, if you’re not aged 23, it’s very hard to get further than that.

My full-time job is comedy admin, so I don’t have the time to perform as well, really. And I’m too lazy to perform. I’ve not written a joke in four years.

JOHN: Before comedy, you were doing what…? 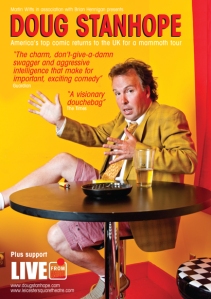 DAVID: Graphic design, which I still do. I still do the design work for here and Leicester Square Theatre.

DAVID: I think, if it’s a creative thing, that’s… Well, weirdly, there are a lot of comics from an art and design background. They start popping up online at this time of year saying Do you want poster designs for your Edinburgh Fringe show?

I did fine art originally, at Bradford College of Art.

JOHN: You are from Bradford.

DAVID: Yes. Then I did an MA at Camberwell in London. There is no money in doing fine art, but you can make a living doing graphics. So I started doing that by accident.

JOHN: You used to run a night called Get Happy in Farringdon.

DAVID: My girlfriend at the time and I had both done Logan Murray’s comedy course and running Get Happy was an easy way to get stage time.

JOHN: You did Logan Murray’s course because…?

DAVID: I think stand-up comedy is one of those things where you always fancy giving it a go.

JOHN: So you started in…?

JOHN: And now you are in theatre management and Artist Development… So do you get a hard-on by finding new talent? I will think of some better way of phrasing that when I transcribe this.

DAVID: I’m spunking my pants even as we speak.

JOHN: Perhaps I will leave it in, then, if that’s the phrase.

Behind The Scenes at the Museum… of Comedy

DAVID: I know what you mean, though. When I first started running my own comedy night, I actually found that there was more satisfaction in putting an entire night together that works than there was going up myself and performing. I just found there was something really nice about the fact that people would come into a pub and watch something for an hour and a half and go away happy.

JOHN: Because you had structured it well.

DAVID: Exactly. There are so many comedy nights that aren’t structured and are just a shambles and then they wonder why they don’t work.

JOHN: I think club owner Malcolm Hardee’s rule-of thumb was you end with the best act, start-off with the second best act and have a good solid act at the end of Part One. So what is your template structure?

JOHN: The acts all get 5 minutes.

DAVID: Yeah. It’s all about keeping it in manageable chunks, I think. And proper lighting; proper sound.

JOHN: Have the nights got better over the course of the first year?

DAVID: Yes. Because we have started to get some regulars in the audience. People don’t come back every week but, if we ask at the start, usually at least half of them have been before, which means we now have an audience that knows what’s going on and are on-board with the concept. Which is nice. You start with a warm audience, so it’s better.

We want it to be relaxed for the audience AND the acts. One of the reasons we start at 7.00pm and finish by 9.00pm is it leaves time to have a chat afterwards. 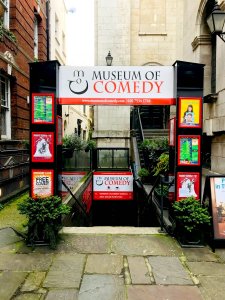 Crypt-ic comedy under a Bloomsbury church

JOHN: The acts you have on are good solid acts but not ‘TV names’ or mega names. Are the Big Names too big to play The Monday Club?

DAVID: I think audiences generally are more aware of the concept of new material now. I think once you reach a certain level, you can do a whole hour of new material rather than rock up and do five minutes. The Big Names can do an hour and sell tickets to it. Michael McIntyre has been here at the Museum of Comedy doing new material. Alexei Sayle is on for a week with a new show.

JOHN: When they’re Big and more experienced, they can try out entire shows rather than five minute chunks, which is the Monday Club format.

DAVID: Yes. But Josh Widdicombe has done a Monday Club. Rachel Parris did one.

JOHN: Next Monday is going to be a special show to celebrate your 1st anniversary?

JOHN: But with added free cake, I heard.

JOHN: Then I’ll be here.

DAVID: We have started describing it as “London’s best new material night” purely on the grounds it is difficult to prove any different.

Is comedy more or less important than sewage management?

Years ago, I was on a BBC shorthand writing course and one of the other guys on the course was a BBC News Trainee and Cambridge University graduate called Peter Bazalgette; there was something interesting about his eyes – a creative inquisitiveness – that made me think he had immense talent.

But he never got anywhere in BBC News.

He ended up as a researcher on Esther Rantzen’s That’s Life! and, from there, he became producer on one of the most unimaginatively-titled BBC TV shows ever: Food and Drink.

He made a big success of that and in doing so, it is often said, he created the new concept of celebrity chefs. He then started his own company, making Changing Rooms, Ground Force and  Ready, Steady Cook amongst others.

His company ended up as part of Endemol and it is Bazalgette who is credited with making the Dutch TV format Big Brother such a big success in the UK and worldwide. By 2007, he was on Endemol’s global board with a salary of £4.6 million.

Last year, I saw another Cambridge University graduate perform at the Edinburgh Fringe – Dec Munro – and he had a creative inquisitiveness in his eyes similar to Peter Bazalgette’s.

Dec currently runs the monthly Test Tube Comedy show at the Canal Cafe Theatre in London’s Little Venice. I saw the show for the first time last night and he is an exceptionally good compere.

Ivor Dembina and Janey Godley – both, perhaps not coincidentally, storytellers rather than pure gag-based comics – are that rare thing: good comedians AND good comperes.

The late Malcolm Hardee – with the best will in the world – was not a particularly good comedian in a normal stand-up spot on a comedy bill – he really did survive for about 25 years on around six gags – but he was a brilliant, vastly underestimated compere as well as a club owner and spotter of raw talent and, as was often said, his greatest comedy act was actually his life off-stage.

Dec Munro has strong on-stage charisma and, judging by last night’s show, a good eye for putting together a bill, combining the more adventurous parts of the circuit – George Ryegold and Doctor Brown last night – with new acts who are very likely to have a big future – the very impressive musical act Rachel Parris

Of course, if they read this, I could have just destroyed Dec Munro’s and Rachel Parris’ careers. There is nothing worse than reading good mentions of your performance and believing them.

And I don’t know where either will end up.

In three years, Rachel Parris has the ability to be a major TV comedy performer. And Dec Munro should be a TV producer. But broadcast television is yesterday’s medium even with Simon Cowell’s successful mega shows. And no-one knows what the replacement is.

Perhaps Dec Munro and Rachel Parris will ride the crest of an upcoming wave; perhaps they will fade away. Showbiz is a dangerously random business. But, then, so is everything in life.

Peter Bazalgette is the great-great-grandson of sewer pioneer Sir Joseph Bazalgette who created central London’s sewer network which was instrumental in stopping the city’s cholera epidemics.

Sometimes handling shit in a better way can be more important than being a successful showbiz performer or producer.

You can create your own punchline to that.