Being a comedian inside Broadmoor hospital for the criminally insane…

Yesterday’s blog told the story of how comic Martha McBrier was attacked in Glasgow, left partially deaf… and how her family and partner, comedian Matt Price, tried to get justice by contacting violent Glasgow gangsters.

In 2008, Matt told the story to a comedy promoter and ended up going to Broadmoor high security hospital for the criminally insane.

When I met him last week, I asked: “What did the promoter say?”

“It will give you an insight into the criminal mind, is what she told me. And it did, but not in the way I anticipated. At the end of it – it was horrible but – at the end of it, I had another gig and, as I was waiting to go on stage, I was on the phone to her crying my eyes out and she asked Why are you crying? and I said I don’t know. I think I’ve been in the presence of evil.

“She said Are you sure it’s not just that they didn’t laugh at any of your funny jokes? and I thought Yeah, dry your eyes.”

I prompted Matt: “You said that it had an effect on you but not the type of effect you’d thought it would…”

Matt told me: “I had been quite proud of myself – and I think ‘proud’ is the right word – to be able to go and see Glaswegian criminals. That kinda made me proud in the sense I had faced a fear. It had been quite a big deal when I realised I didn’t have to take violent revenge on somebody.

The comedy show put on inside Broadmoor

“So, when Broadmoor was mentioned to me, I almost didn’t hear the ‘criminally insane’ bit.

“The comedy promoter told me: You’ve got a great personality. You’re gonna be brilliant.  It’s the first and last day they’re going to do comedy in Broadmoor. You should go along and there’s murderers and rapists and paedophiles there. It will give you an insight into the criminal mind.

“I almost didn’t hear the murderers and rapists and paedophiles bit either. I just thought: Oh, I’ve got personality. I’m a people person. It’ll be great.

“But what I realised as a result of going into Broadmoor is that comedically you have to have something in common with the people you’re in front of – or you need to give them the ability to relate to you at some level. You can’t do that when the person in the audience has sawn off someone’s feet or beaten them to death with a hammer. Empathy goes out the window. It’s very difficult to do observational comedy in front of people who are criminally insane, because what do you observe?

“We were told in advance: You can’t talk about sex or violence. Try not to swear. Don’t say anything that will remind them of the outside world.

“Because of the emotion behind it, because I was essentially there because of what happened to Martha, I was very emotional and believed that in some way I could get some closure from performing in Broadmoor.

“One of the nurses had told me: When they walk in, you’ll be able to tell what crime they’ve committed. And, because she put that into my head, I was fine until they came in. Then suddenly I thought Yes. I can see. You’re a rapist. You’re a murderer. You’re a paedophile. Suddenly the room’s spinning around.

“I asked if I could just go outside for a little while and I was told No, because it will remind them they’re incarcerated. And secondly, I was told, you’ll probably notice the patients are physically very big. This is because they eat a lot of junk food. The junk food that they don’t eat, they feed to the squirrels. So the squirrels living outside Broadmoor are massive – several times the size of normal squirrels. You think you’re scared now? If you see squirrels four times their original size, they will frighten the life out of you.

“So I wanna go outside, but I can’t go outside because of the squirrels.

“And so then I started wondering Am I the one who is mad?

“The patients were coming up and touching my fist and shaking my hand and getting physically close to me. One of them actually said In prison we do it like this and made me touch fists with him. Part of me was thinking, as I was feeling quite sick and afraid, Are you telling me I have the same qualities as you? Am I the same as you? And it was going through my head: I’ve never raped anybody. I’ve never murdered anybody. Maybe I’m the one who’s criminally insane.

“What do you say to that? 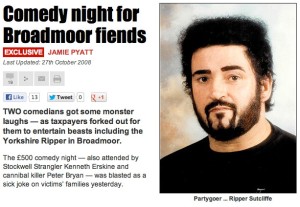 “The stage was high, but one guy stood in front of the stage and his head was sticking over the top and I remember thinking: I could kick your head off the top of your shoulders now and I’d end up in here for the rest of my life.

“Everything just made it frightening. The fear of being around these people, coupled with the squirrels. It made it the most surreal experience. And part of me thought: Did I make that up? Did she really tell me that? Maybe I made up the whole squirrel thing? Maybe I am temporarily psychotic? But, no, it’s true.

“Then I thought: Well maybe she just said the bit about the squirrels to stop me going outside.

“After the show had finished, we had to wait in the foyer and all the patients were walking past and allowed to go to their bedrooms. We were told Once they’ve gone, you can leave. We wanted to leave anyway because we were both afraid. I was with Ray Peacock, a brilliant comic, and someone walked by and looked at me and said Oh I thought you were brilliant and let out a cackle – Heh! heh! heh! heh! heh! – and I jumped up out of my chair to square up to him.

“Normally, I don’t square up to anyone. It’s not my thing. But I did. And I remember saying to this inmate: Yeah! Go on! Facebook me! and Ray Peacock had his head in his hands laughing. I thought he was going to die laughing. Facebook me!

“And then the woman who was in charge came over and said to me: Well, that wasn’t very professional, was it? And I said I’m scared! You need to understand I’m genuinely scared! And then we left. Quickly.

“I thought I could make sense of it, but some things you just can’t understand or some things, at least, are beyond my comprehension.

“It did change how I felt about people. It took my naivety away a little bit, because I always thought I could get on well with anyone. In ordinary life, I always thought it was possible to find something of common interest with someone. But with the criminally insane? It’s just not possible.”

“So,” I suggested to Matt, “meeting gangsters in Glasgow didn’t change you because, in a sense, they were normal people. But people in Broadmoor are not ordinary people. They’re mad.”

“Well,” said Matt, “I think gangsters do things that are on the madness scale.”

“Like the guy who screwed people’s hands to the floor,” I conceded.

“Yes,” said Matt, “But it’s so weird, because he cried when his grandchild was born.”