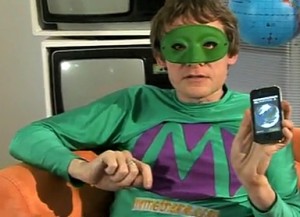 Yesterday, Mr Methane got iRate about iTunes on his iPhone

There seems to be no end to the bloggability of my chum Mr Methane, the Farter of Alternative Comedy.

I got an e-mail from him yesterday afternoon:

“Just over two years ago,” it started, “I produced a Mr Methane fart app. This was rejected by iTunes and remains unpublished due to Apple’s we don’t need any more fart apps policy of September 2010.

“They told me: We cannot post this version to the App Store because we are no longer accepting this type of app. We don’t need any more Fart apps. If your app doesn’t do something useful or provide some form of lasting entertainment, it may not be accepted.

“But fast forward to 2013 and, in the UK, Comic Relief now have a Fart App on the Apple Store.

“Something stinks here,” Mr Methane continues, “there seems to be one rule for me and another rule for someone else! In fact, I’d like to offer Apple my app as a charity download for those people pissed off with Red Nose Day. The profits would go to children in Africa deeply traumatised by being visited by Lenny Henry every year for a Comic Relief documentary.

“Seriously, though, I think Comic Relief needs to move on, get more radical and rediscover those anarchic alternative days of the 1980s when Comedy took on the Establishment and politicians, shining a light on their inadequacies and nefarious activities.

“I honestly think that if Comic Relief said Look, everybody! This year we are raising money for humanitarian aid to help families whose lives have been wrecked by illegal attacks from US and British operated predator drones, showed a documentary about it and then asked government ministers some awkward questions, they would have the biggest take in the charity’s history.

“That said, it’s a free country – allegedly –  and some people would say that I’m just doing what I always do – Talking out of my arse!”