“I’ve been mixing with weird people all my life – musicians, comedians, actors – They’re all f***ing cranks.”

Brian Damage and his wife Vicky de Lacy perform musical comedy as Brian Damage & Krysstal and have run Pear Shaped Comedy clubs in London, Edinburgh and Sydney. At the moment, the club is weekly in Fitzrovia in London.

But Brian also paints and, in fact, created the image I use for the Malcolm Hardee Comedy Awards (based on an original photograph by David Tuck). So I thought it would be interesting to write a blog about Brian Damage the Artist rather than Brian Damage the comedy performer/club runner.

“Have you been painting all your life?” I asked him yesterday afternoon.

“Why?” I asked, thinking I might have chosen the wrong subject to chat to him about.

“Around then,” he told me, “I took to cartooning and had about 16 published in Tit-bits magazine. And then, for some reason, I just stopped.”

“So when did you rediscover the joy of Art?” I asked.

“I can’t remember. But I know it was 2010 because I was extremely interested for two years and I’ve hardly painted at all this year.”

Oh dear, I thought, with a sense of impending doom. 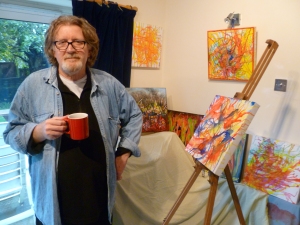 Brian Damage was at home with his painting yesterday

“Why did you start painting?” I asked.

“Originally, when I was a kid, because I was really into Dali and surrealist stuff.”

“But you don’t do surrealist stuff yourself.”

“I did then,” said Brian. “My dad… His idea of tidying up was to start a bonfire. He’d see my paintings lying around and burn them. He would burn clothes and everything.”

“Anything he saw lying about, he’d say: Right! I’m tidying up today! But you might not necessarily be there when he was tidying up.”

“So there was a lot of arson around when you were a kid?”

“So you’re a frustrated painter?” I asked.

“Yes. Art was the only thing I was good at at school.”

“But you got into music when you were…?”

“Why did you move from music to comedy?”

“Because I was never a great singer or drummer or guitarist, but I could do jokes.

“I started as a drummer and I was working as a musician up until I got married for the first time when I was 24 and my then wife told me: It’s time you grew up and acted your age and stop doing that horrible music and you should get a proper job. I was playing in my mum and dad’s band at the time. That was weird: dumping working with your own mum and dad to get a ‘proper job’. 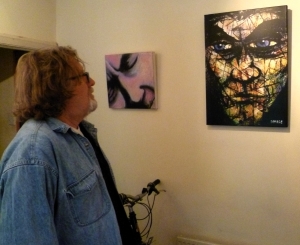 Brian with two of his works. The one on the left is of his father

“So, for a while, I got a job in the warehouse of a company in Highbury, humping around boxes of mattress handles for export to Nicosia via Famagusta.

“Then I got another job and kept being promoted and, after two years, I was the manager of a Burberry shop in Lower Regent Street.”

“And then you left your first wife and moved into comedy,” I said.

“Well, with music,” Brian explained, “you can go sit in a corner, play and be ignored and everybody’s quite happy with you. That’s your job. I never wanted that. I did not want to be background.”

“So with comedy, you got more attention?”

“Yeah, as a drummer I always wanted to be out the front showing off on guitar; I did not want to be at the back.”

“And, in comedy, you started doing what…?”

“At the time, I was into mainstream comics like Chubby Brown, Jim Davidson, all the unfashionable ones and I had a big collection of jokes before I started on the comedy circuit: every one was a ‘banker’ – all tried and tested.

“I heard Chubby Brown on the odd tape or video. He was extremely prolific. If you wanted good jokes, you just found the latest Chubby Brown tape and there would be at least ten ‘killers’ on it that you could use for the rest of your life. All the others used to share the jokes, but he was where they all came from.”

“Yes… Well, I’ve got all the dates muddled in my mind, so I shouldn’t pay to much attention.”

“So you have got newly interested in Art again recently. Why?”

“Grayson Perry,” replied Brian. “Have you heard his Reith Lectures?” 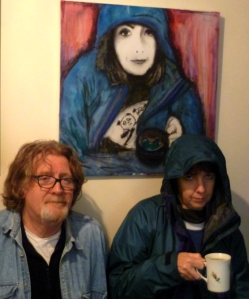 Brian with his painting of Vicky – and the real thing

“When we got my pictures together, I said to Vicky: Look, I can paint, but I can’t talk to people about it. I got into trouble on a website called Redbubble. I had loads of stuff on it – I don’t any more – and people got back to me after I uploaded a picture and said: Marvellous! Marvellous! So vibrant! So blah blah blah blah. And I said: Actually, it’s just a photograph of the paint at the bottom of the dish and I thought it looked interesting.

“They were so pissed-off!

“There’s so much bullshit, but what got me interested again was Grayson Perry, because he doesn’t like the bullshit either.”

“Just basically saying: Yes, Art is great; it’s fun to do, but you’ll be lucky if you don’t get robbed by the dealers… and what makes it valuable and viable… and is it a good idea to get a little piece of dog shit and put a flag on it?” 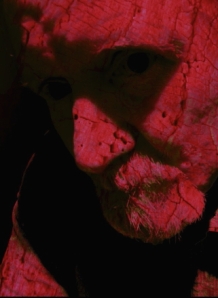 A self portrait of and by Brian Damage

“Well, it is and it isn’t. But I found myself agreeing with so many of his sentiments. I’ve been mixing with weird people all my life – musicians and comedians and actors – they’re all fucking cranks. And then there’s the Art thing. You go to one of the open nights when all the pictures are up and, if someone says your painting’s good, you have to say their painting’s good and the silences are deafening. I can’t get involved in it. It’s just more cranks.”

“Actors and comedians and musicians and artists are all odd,” I agreed, “but they’re all odd in different ways, aren’t they?”

“Yeah. They’re all cranks and that makes it all interesting but I can’t… I… There’s a friend of mine who used to do comedy and, at some point, his wife said: Why are you fucking around with this comedy? You’re a good artist. Why not just concentrate on your art and get rid of this comedy shit?

“Which he did. So he sends me stuff about the various art installations that he’s involved with. If I were to make a big chicken and put it over there, it would be adored and reviled by various people but the local council would have paid me thousands of pounds to make it if I told them: The colouring of the feathers shows the diversity of nations and brings them all together in a clash of featheringness.”

“Well,” I said, “there is a story – which surely has to be apocryphal – about Damien Hirst going to some meeting with people who wanted to commission him and he accidentally trod in some dog shit on the way there. So he took his shoe off, went into the room, put it on the table and told them it was his latest work of art. The story is they believed him.”

“Do you do Art on computers?” I asked.

“That’s what that Malcolm Hardee poster was,” said Brian. “I was trying to figure out how to use the pen in Photoshop.”

“You know we’ve put a band together?” 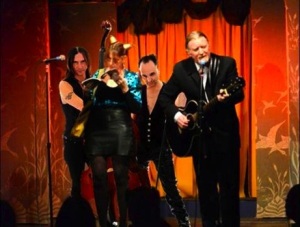 “That’s our main project at the moment. The Wrinklepickers. Vicky sings and we’ve teamed up with a double bass player and a bloke who plays pots and pans and a snare drum. The fantasy is I want one other musician who plays the fiddle, mandolin, banjo and accordion – instruments which change the feeling of the band straight away. That’s the fantasy. What I have got is a lead guitarist who hasn’t managed to get to a rehearsal yet. We’ve managed two gigs so far, both in Kingston. The first gig was hilarious without doing comedy. The second one was more serious because about 90% of the songs were original.

“The original idea was hillbilly-bluegrass-rockabilly, that sort of thing. But it’s actually none of those.”

“There is a song called I Love You online which Vicky and I wrote and it’s just the two of us in the garden during the Big Snow.”

“Well,” I said, “with iTunes, you can be successful in all sorts of odd parts of the world.”