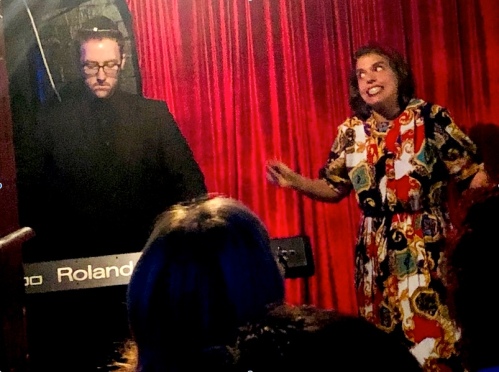 I almost never do reviews in this blog but – hey! – if it involves a bit of self-publicity too…

In 2014, we gave the main award for Comic Originality to Candy Gigi.

It is an astounding abso-fucking-lutely gross-out musical about a frustrated young, wildly psychopathic Jewish girl’s life and marriage in Borehamwood.

The poster bills it (and this rather understates the case) as:

and the blurb listing says: “This deluded, narcissistic, unsatisfied occasionally violent woman has delusions of grandeur and wants to become the biggest star in the universe – or at least in Borehamwood.”

Far too OTT to be staged by any mainstream West End Theatre, but with superbly tuneful songs by Jordan Clarke performed by Candy Gigi with belting all-stops-out passion, including Borehamwood!, Finishing What Hitler Started and the hopefully/possibly prophetic She Will Be a Star.

This (certainly in the preview last night) is a 5-Stars-of David show.

There is a clever line in one of the songs about wanting to be “a Jewish Barbra Streisand“.

But it felt more to me like Ethel Merman Meets Lionel Bart in some unholy, foul-mouthed, foul-imaged, sweet-tuned union.

It will be a bloody miracle if Candy Gigi’s voice lasts out for the whole 3½ weeks of the Edinburgh Fringe.

I always thought she had immense potential though what on earth she could do with it I was never quite sure. Now I know. Candy Gigi should be on the West End and Broadway stage in a musical (with words and images that don’t make your aged aunt or Miss Marmelstein blush).

As with all Candy Gigi shows, do not sit in the front rows unless you enjoy imminent physical peril.