“I generally don’t,” I replied. “But you were brilliant tonight. Utterly brilliant.”

In fact, there was not an even remotely duff act on the show. 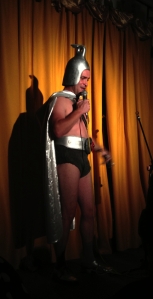 Character act Barbara Nice had the entire audience on its feet singing and dancing along. Oram & Meeten were as crowd-pleasing as always (that’s a compliment); Danish comedian Sofie Hagen, in only a three-minute spot, appeared to successfully go way off script in highly-confident and highly-successful audience interaction; and there was what was claimed to be the world premiere of extraordinary character act The Silver Peevil – very funny – a scantily-clad retro visitor from Venus circa 1935.

All this plus the Greatest Show on Legs in a pre-show-start act which involved Martin Soan  with a Campbell’s soup can round his neck a la The Producers and a post-show event in which he literally carried his wife Vivienne off stage.

I think the word “variety” springs to mind.

That has been the word of the week.

The previous night I saw the penultimate Mat Ricardo’s London Varieties at the Leicester Square Theatre (last show this year and possibly forever is next month). That managed to smoothly blend admirably foul-mouthed Jenny Eclair, an extraordinary ping-pong act by Rod Laver (not the tennis champion), a So and So Circus dance acrobat duo and veteran comic Jimmy Cricket. 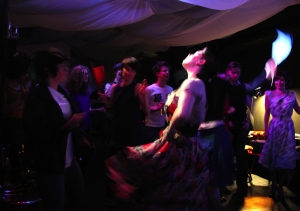 The previous day, I had chatted to Susan Harrison about her Cabarera Club (more on that in a future blog) and been interviewed by Si Hawkins for an upcoming piece in Fest magazine about what may or may not follow ‘alternative comedy’.

It feels as if Variety/Cabaret may be the answer, though who knows? Not me.

‘Alternative Comedy’ at the late Malcolm Hardee’s clubs – and many others in the days when it really was alternative – meant shows where you saw some stand-up comedians and perhaps a music act, a juggler, a possibly psychotic indescribable act and perhaps a man torturing teddy bears (bring back that act!)

Possibly the most bizarre two things in a very odd evening last night, though, happened outside the venue after Pull The Other One had finished.

Vivienne Soan told me she had stumbled on what was, to both of us, an unknown sub-culture of Laughter Clubs scattered around the country.

“Neither had I,” said Vivienne. “They’re all over the country.”

“Maybe they are like Fight Clubs,” I suggested. “You must never talk about them.”

“They have £175 lessons,” Vivienne told me, “where they teach you how to laugh. And they give you a certificate afterwards. I think they really ARE having a laugh.”

Shortly afterwards, I had a chat with comedian Lewis Schaffer, who does not normally go to other people’s shows but had been bullied into going to Pull The Other One by his tenant. (He has tenants; he’s Jewish; what can I say?)

“Great,” I said. “You’re at your best when you’re depressed. What has happened?”

“My Leicester Square show has been extended again,” he said, glumly.

Lewis Schaffer, with no shoes

His weekly show Lewis Schaffer’s American Guide To England started in March this year, for an 8-week run. It was then extended for a few weeks. Then extended to the end of July. And now it has been extended again until next March (with a break for the Edinburgh Fringe in August).

“You mean it sounds too successful and Lewis Schaffer does not ‘do’ success?” I asked.

“Yes,” said Lewis Schaffer. “It will all end in tears.”

“You could always start torturing teddy bears on stage,” I said.

Lewis Schaffer looked at me. There was a pause.

“You’re just trying to make me feel better,” he said. “It’s going to be a disaster.”

“Because I’m Lewis Schaffer,” he said.

“You have a point there,” I agreed. “But don’t worry. Look on the bright side. Maybe it will never happen. Success.”

Despite my attempt at reassurance, Lewis Schaffer walked into the night, his brow furrowed, fretting about the unwelcome possibility of success.