Wilko Johnson: the rock star who lived in ecstasy while under a death sentence

Last night, courtesy of Michael (son of Micky) Fawcett, I went to the premiere of The Ecstasy of Wilko Johnson, director Julien Temple’s almost abstract movie about the legendary British guitarist who also played mute executioner Ilyn Payne in Game of Thrones. There is a trailer on YouTube.

The Ecstasy of Wilko Johnson was going to be about Wilko dying of terminal cancer, except Wilko did not. 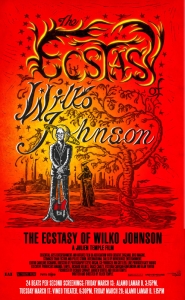 The Ecstasy of Wilko Johnson poster

Charlie Chan, a friend of Wilko’s who juggles being a music business photographer with being a breast cancer surgeon, realised that there might be some hope. Surgeon Emmanuel Huguet operated on Wilko for nine hours at Addenbrooke’s Hospital in Cambridge and the result was there to see last night.

Ironically, Michael Fawcwett told me, Wilko survived because he did NOT take any chemotherapy treatment. He just accepted he would die, did concerts and last year made a hit album Going Back Home with Roger Daltrey as part of his ‘farewell’.

“I decided,” said Wilko, “just to accept the situation and go through it and die, to live whatever life I had left and go with the flow, whether it was booking gigs or Julien making a film.” 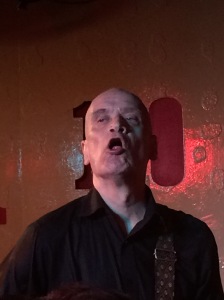 If Wilko had taken the chemotherapy treatment, he would have been too ill to survive the operation which saved his life. So his acceptance of death resulted in his life continuing.

The film had a special relevance to Julien Temple because, at the time it was being made, his own mother was dying. So it goes.

“All the twists and turns,” said Wilko, “that happened during that year…”

“That’s the thing about a documentary,” said Julien. “You don’t know where it’s going. There’s something fantastic about the element of chance which is what life’s about, really. If you over-script things, sometimes you… You would never write a film like this. No-one would believe a fiction film if you had written it like this. Who would ever believe a rock star so erudite?”

“If you wrote it in a book,” Wilko said, “it would be condemned as an improbable fiction.” 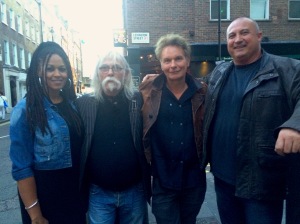 After the screening, I went to the 100 Club in Oxford Street, where Wilko and his band played a one-hour, sweat-pouring, full-throttle gig. I had thought the 100 Club had closed but, like Wilko, it is still very much alive.

In the red-walled basement club, I bumped into Edinburgh Fringe regular Ronnie Golden aka Tony De Meur of the former Fabulous Poodles. His girlfriend Grace Carley was executive producer on The Ecstasy of Wilko Johnson.

“I love this club,” Ronnie/Tony told me. “I remember it from the late 1970s. It looked almost exactly the same. It’s just a brilliant, brilliant shit-hole. In those days, there was no air-conditioning and they had a stall over there that sold Chinese food so you had this smelly stench and everybody smoked so the air was filled with smoke and this stench. It was insane and our drummer passed-out on stage. The sheer heat and everything.” 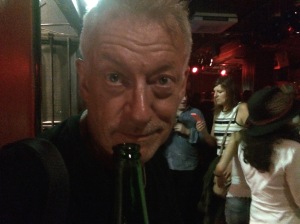 “While he was performing?’ I asked.

“Yeah,” said Ronnie. “And it happened in the Marquee Club too. He was susceptible to passing-out.”

“What,” I asked, “did you do when he passed out on stage during the gig?”

“We walked off and they played some music on records and then we came back on again.”

“Yeah. It happened in Philadelphia too. But he would always rally very well.”

When I left the 100 Club, I walked to Oxford Circus station with Emmanuel Huguet, the surgeon who saved Wilko’s life. I asked him, perhaps tritely, what it is like being a surgeon.

“You get to meet some very interesting people,” he said.

There is a video on YouTube of Wilko Johnson and Roger Daltry’s Going Back Home. 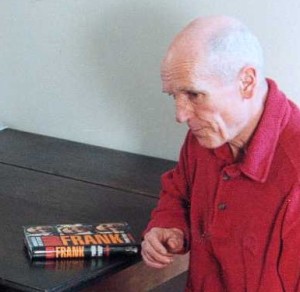 The meek will never inherit the earth but, sometimes, it is the quiet ones who are remembered. Though often only if they create their own legends.

I think I have met two, possibly three, SAS men (it is difficult to know for sure). They will probably not be remembered, except by their friends and family, because they did not write books.

The late comedian Malcolm Hardee never became famous during his lifetime. The irony is that he may be remembered much longer than many comedians who achieved fame because he wrote an autobiography I Stole Freddie Mercury’s Birthday Cake which was not just a bland quick hack book. One of the stories in the book took place when Malcolm was in prison:

I used to play bridge with this bloke called Johnny Hart, who was one of the most pleasant blokes you could meet. But he started to get depressed. So he went and saw the doctor. Then he went to a psychiatrist who gave him some tablets. And, after that, he started getting extremely paranoid at certain times. When you play bridge with someone, you sometimes say:

“Well, you shouldn’t have led with that card.”

After starting the tablets, if you said that to Johnny Hart, he’d really explode and look quite dangerous.

One day, I was eating my dinner in the dining room and, all of a sudden, right in front of me, I saw Johnny Hart get up and stab this black guy. He’d stolen a 10’-12″ knife from the kitchen and he pushed it in this guy’s back. He pushed it into him right up to the hilt. The black guy literally looked like he’d turned white. He collapsed over my table.

Johnny Hart went to court for attempted murder and it turned out it was all over the fact he thought this black guy was wearing his plimsolls.

I read some years later that Johnny Hart had committed an awful crime where he’d burgled a house, tied a couple up and murdered the wife. So maybe it wasn’t the tablets.

Malcolm Hardee was quietly-spoken off-stage, rather shy, polite and sometimes had a strange inner stillness about him which I could not understand at first, until I realised he had spent rather a lot of time in prison in the 1970s. If you have lived and mixed with dangerous, sometimes psychopathic men whose personalities may suddenly turn on a sixpence, you have a certain inner wariness.

I was with Malcolm at the Edinburgh Fringe one year – it was the year he performed his show in the living room of his rented flat. After the show, a member of the audience came up to him to chat. Before the man spoke, Malcolm said: “You’ve been inside,” and he had. Malcolm had recognised something in the man’s look and demeanour and knew that he had spent time in prison.

Eric Mason died last Wednesday, aged 81. I only met him twice, very briefly. He had been in prison. He was very quietly-spoken, very polite in a slightly old-fashioned way. He had that same stillness, He was like a kindly old uncle.

One night, outside the Astor Club in London, Eric got into an argument with ‘Mad’ Frank Fraser.

Frank says he “slung him in the motor”, took him to the Atlantic Machines office and had a chat with him. Frank then drove Eric to the London Hospital and dumped him in the car park with, so the story goes, the axe still sticking out of Eric’s head.

The way Frank used to tell this story on his coach tours of Gangland London: “I wouldn’t ‘ave minded so much, except I never got me axe back and that axe was from ‘arrods.”

He once said to me: “I worry a little bit about what they’ll say about me after I’ve gone,” but he has helped his own legend by writing copiously, notably in his autobiography Mad Frank and in Mad Frank and Friends, Mad Frank’s Britain, Mad Frank’s Underworld History of Britain et al.

The best way to control your own legend is to write the main details of it before you die.

Eric Mason may be remembered, slightly, because he wrote two books: The Inside Story and The Brutal Truth

Norman Parker was also – and presumably still is – a quiet-voiced, very polite man in a neat suit. I met him briefly, once, in 2001.

In 1963, when he was 18, he killed his girlfriend Susan Fitzgerald. Her best friend testified in court that Susan slept with a gun underneath her pillow and had a record of violence. Norman is Jewish. Susan admired Adolf Hitler and both her brothers had been guards for British Nazi Sir Oswald Mosley. Susan read books on concentration camps and her family was deeply involved in armed robberies. It was said “she was a violent and unbalanced girl.” Norman pleaded self-defence and was sentenced to 6 years for manslaughter.

He later explained: “One day we had a hideous argument. She pulled out a gun. I thought she was going to shoot me, so I pulled out my gun and fired one shot. It hit her in the head.”

In 1970, when he was 26, Norman was sentenced to life imprisonment for another murder. He had killed Eddie Coleman.

‘We had an argument,” he explained, “about the way we wanted to hijack a lorry. Edward pulled a gun on me. I struggled for it, David (Woods, Norman’s co-defendant) hit him with a hammer. He fell to the ground and I killed him with his own gun. I killed a man who seconds before was trying to kill me. At worst it was manslaughter. I don’t think the public lose much sleep when violent criminals kill one another. I covered up the murder. But we bumped into a policeman when we were trying to dispose of the body, and I assaulted him.”

Norman Parker was sentenced to 23 years.

After 24 years, he was released, having spent over half his life in jail. A week after his release, he was interviewed: “I can’t believe the homeless people on the streets,” he said. “ People actually sleep in cardboard boxes. I’m also shocked by sex and promiscuity. Take these phone lines where people talk dirty to you. If someone had come out with that 23 years ago, he’d have been dragged into a psychiatric hospital.”

The best way to control your own legend is to write the main details of it before you die.

I only met John McVicar once, many years ago, in his flat near Battersea. He, too, was very quietly-spoken, polite and reflective. And he too wrote his own legend.

He was an armed robber in the 1960s. He, too, received a 23-year jail sentence. He escaped from prison several times and, after his final re-arrest in 1970, he was given a sentence of 26 years.

His autobiography, McVicar by Himself was filmed in 1980 as McVicar, with Roger Daltrey of The Who in the title role.

If you write your own legend, memory of what you have done in your life may survive death.

If you have a rock star play you on screen, you will be remembered.

Or – if not the ‘real’ you – the ‘you’ which you yourself have created.

The meek will never inherit the earth but, sometimes, it is the quiet ones who are remembered.