I started this blog in 2010 and it is usually referred-to as a “comedy blog” but, just out of quirky interest, here is a list of what were my Top Ten blogs in terms of hits last year.

2) The practicalities of putting your head in a gas oven: my 2nd suicide attempt

9) Edinburgh Fringe, Day 12: How to destroy a comedy career & other news

Edinburgh Fringe, Day 8: These shows are all far too good and then Consignia 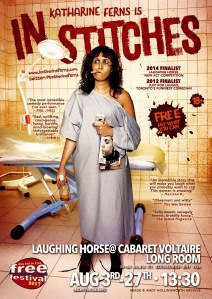 It has been a bad Fringe for me in the sense that, so far, I have not seen a truly terrible show. Where have all the shit shows gone?

Then there was Giants’ sketch comedy show For an Hour with Ian Hislop’s son Will Hislop and his friend-since-childhood Barney Fishwick. The former is in the unenviable position of facing 3-4 years of being called “Ian Hislop’s son” and the latter is facing 2-3 years of being called “the other one”. Nothing can be done about this. That’s life. As Oscar Wilde did not say, the only thing worse than being labelled is not being noticed.

(L-R) Will Hislop succeed? Yes he will, with Barney Fishwick

That’s the downside. The upside is that they are supremely self-confident, highly professional and write and perform impeccably. There is a humdinger of a ‘door’ gag and a very clever ‘Israeli’ reference which are worth the price of admission on their own. And they will have their own TV series within 3-6 years tops. Probably in some BBC2 double-billing with Ruby Wax’s equally well-connected daughter duo Siblings.

The next two shows I saw were Ashley Storrie’s and then Janey Godley’s.

Janey is probably the most talented creative all-rounder I have ever met. Her autobiography Handstands in the Dark was a bestseller in Scotland and England; she had a column in The Scotsman; her shows are masterclasses in audience control and performance; and this year’s Fringe show was preceded by a two-day shoot in a part specially-written for her in an upcoming Julie Walters feature film. If she did not live in Glasgow, she would be a major star.

When you know Ashley is her daughter, you can spot the inherited performance skills, though their on-stage personas and schtick are different. I saw their shows (in different venues) consecutively and it was fascinating to see how they dealt with overlap material (particularly the recent death of Janey’s father) differently.

Janey’s act mentioned the time she and I were sitting in her living room in Glasgow and an entire building blew up across the road.

Which brings me to Consignia’s intentionally shambolic late-night Panopticon show.

This is one show which should create a sense of nervous anticipation in any audience and where Malcolm Hardee’s intro “Could be good; could be shit” resonates. And, in the case of Consignia, he might have added: “Good and shit could be the same thing here. Fuck it.”

This is the traditional spirit of the Edinburgh Fringe.

I had very little (possibly no) idea what was going on during the show but neo-Dadaism might be the best description. I was dragged out of the audience, a pink tutu put on my head to represent a bride’s veil and I was told to wave my hand while repetitive music played for I guess around 4-7 minutes. Might have been 47 minutes. Meanwhile, Nathan Willcock stood with (what I think was) a fake TV screen on his upper body and Mark Dean Quinn repeatedly hit Phil Jarvis in the face with a mop while he (Phil) yelled out “No!”.

Eventually, in its repetitiveness, this became quite reassuringly mesmerising and I felt sadly empty when it ended.

I think Stockholm Syndrome may have kicked in.

Either that or my green tea was spiked with some hallucinogenic substance.

On my short walk home, I passed three people sitting chatting and drinking on the edge of a building.

This is Edinburgh in August. 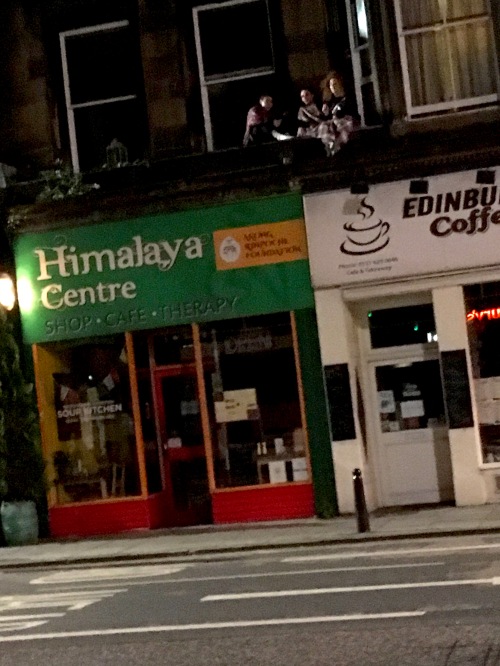 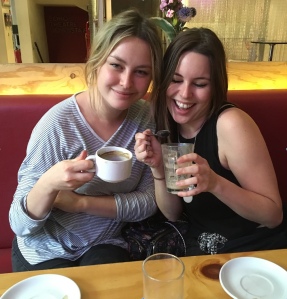 Marina (left) and Maddy Bye drinking it all in

Maddy and Marina Bye are real-life sisters performing their show Siblings at the Edinburgh Fringe. They are the daughters of comedy actress Ruby Wax and legendary TV comedy director Ed Bye.

Maddy went to the Gaulier clown school in Paris. Marina trained at the Guildhall theatre school in London.

So, obviously, I chatted to them.

JOHN: Your mother and father are both in showbiz…

MADDY: It’s weird. I don’t think either of us expected to be here doing this. It just sort of happened.

MARINA: I always liked to sing and dance and be a monkey slave for people. And Maddy did that too. But then I went to drama school to kind of pursue the acting career.

JOHN: Who is your godfather?

JOHN: So Alan Rickman decided you shouldn’t be an actor.

MADDY: I should be a clown, yeah. Well, I was actually frickin’ lucky to have him in my life. I kiss the ground he walked on. One day I told him about Gaulier and he was like: What are you doing? You have to go.

JOHN (TO MARINA): But he didn’t tell you to go to clown school.

MARINA: No, he didn’t. I think he was quite happy I went to drama school. He was very supportive. He came to every single show I did there.

JOHN: Was your father a performer originally?

MARINA: No, but he’s so funny he should be.

MARINA: That’s what’s great about our parents. My mum is very…

MADDY: One is very American and one is very British.

MARINA: Yeah. Two different characters. So I think Maddy and I have a really nice balance in our comedy because of that. It can be a bit showy and big… but then be very British.

JOHN: So you have decided to be sketch comedians… An art form that has died or is dying or is no longer popular…

MARINA: We’re bringing it back!

MADDY: If you wanted to categorise our show, I guess it would go into ‘sketch comedy’, but it’s not standard. Someone reviewed us by saying that the sketches start off quite sketchy but end in a sort of bizarre, uncomfortable clown world that doesn’t make much sense and is completely absurd. We really like being quite dark and…

MARINA: Our aim for every sketch is to start quite normal and structured and then shock as much as we can by taking it somewhere dark.

JOHN: Is there a single thread to the show?

MARINA: Yes. To do with us being siblings and rivals and me thinking I’m a lot better than Maddy because I have professional, classical training and Maddy saying: C’mon. No-one wants to see that! So it’s taking the piss out of that: I’m classically-trained! Everyone wants to see me!

MARINA: Yeah. But then you win… a lot!… Because no-one does want to see…

MADDY: And we’re taking the piss out of our actual selves.

MARINA: Completely. We’ve had to lose all sense of dignity.

JOHN: I’m not keen on dignity. I like a bit of quirky.

MARINA: I fisted a man up the arsehole to split into my male identical alien twin.

MADDY: It was a Neil Gaiman film.

MARINA: The title was How To Talk To Girls at Parties.

JOHN: Ah!… So… In your Siblings show, are you playing characters or being yourselves?

MADDY: The majority of the show, we are characters.

MARINA: But we are ourselves at times – a heightened version of ourselves.

JOHN: You previewed the Siblings show at the Brighton Fringe.

MARINA: We did one show where everyone in the audience was just with us. You know that moment when you’re all on the wave together? We thought: Amazing! Wow! The next night we were sold out but fake blood spilt backstage so Maddy and I were, inexplicably, covered in fake blood for the entire show. People were not only laughing but also really concerned…

MADDY:…that we had stabbed ourselves backstage.

MARINA: I looked over at Maddy at one point and there was a gentle drop of blood running down her nose. I thought: This is really ruining the element of comedy.

MADDY: There was fake blood on someone’s face in the third row. We don’t know how it got there.

JOHN: Did the person in the third row know they had fake blood on them?

MADDY & MARINA (TOGETHER): No!

MARINA: We thought: Let’s just not say anything.

JOHN: The worst thing is that, for at least the next three years, you are going to be referred-to as Ruby Wax’s daughters rather than yourselves. That must be frustrating.

MARINA: My personal reaction is that I’m not at all ashamed that she is who she is. I think she’s amazing. And both our parents have been so supportive.

MADDY: It’s hard, maybe, when you know people have come in with a pre-conceived idea about your comedy or you as a person.

MARINA: We hope they will leave liking US.

MADDY: Liking or disliking US.