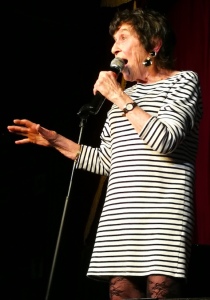 After that, she went to Los Angeles…

So now read on…

It is funny how some friends stay and some vanish as you travel through your life. I met Julie Anderson at the beginning of my comedy career. She took Kurtis Matthew’s course at the San Francisco Comedy College the year after I did. From the beginning, I knew she was a very special human being. At the time I discovered her, she had a 9-year-old son Nigel who thought he was a stand-up comedian. Julie thought so too.

She was living in Vallejo, California at the time. Vallejo then was a very low- income, unsavory place to live.

It still has the highest crime rate of any place in America.

If you live there, your chances of being a victim are something like 1 in 22.

Still, Julie loved it. She had her own house and commuted to work as an administrator in a glass gallery in Napa. At night, she honed her skills as a stand-up comedian.

Julie is a wonderful storyteller and she holds an audience’s attention. She is a born performer. She started her own comedy night in Vallejo and booked lots of San Francisco comedians – but Nigel always stole the show.

After the gig, all the comedians on the bill would go back to Julie’s house where we gobbled up a huge buffet dinner before we drove the hour‘s journey home. I cannot say the comedy was much to boast about, but those dinners were magnificent and everyone loved the entire evening.

As the years went by, Julie found a new partner named Martini and the two created comedy shows together. It was Julie who filmed my first cabaret Ageing Is Amazing.

She has innovative and creative ideas and is not afraid to put them in motion.

She creates happenings wherever she is. 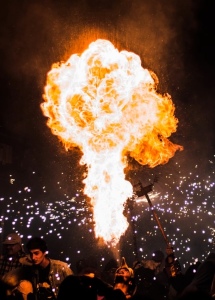 “Does anyone remember the 2008 financial crisis?” (Photo: Sergi Viladesau, UnSplash)

Does anyone remember the 2008 financial crisis? It actually began in 2007 with the depreciation of the subprime mortgage market in the United States and developed into a full-blown international banking crisis by the fall of 2008.

The Bay area in San Francisco was particularly affected with mortgage rates soaring and banks like Wells Fargo determined to take advantage of people whose equity in their homes plunged.

I was one of those victims and so was Julie.

However, Julie handled it differently than I. She stopped paying her mortgage and waited it out until the bank got around to kicking her out of her home.

I continued to pay Wells Fargo, while I tried to reason with them and convince them that they were overcharging me. I wasted hours of my time and energy only to slam against one wall after another.

Julie didn’t even bother to contact her bank. She knew that there were so many foreclosures in Vallejo that it would take years before anyone got around to dealing with her.

And she was right.

During the time she was waiting for the inevitable, she began selling her furniture and her belongings. Finally, the year before I lost my house, Julie walked away from her Vallejo property and moved to downtown LA with absolutely nothing but her determination to make a new life.

Julie Anderson and Lynn Ruth Miller in London in 2018

That was ten years ago and now Julie has established herself in Los Angeles. She is part of the downtown community and feels at home there.

The last time we saw each other she told me that, when I returned to San Francisco, I should go down to LA as well.

I had done comedy in Los Angeles several times while I lived in the Bay Area and had never managed to get into the paying market there. LA is a tough market to crack. This time, I wrote to one of the former San Francisco comedians who moved to LA to make his fortune (as so many of them do) and asked if there was a possibility of being a headliner there with my credentials. He said: “Lynn Ruth, we all do sets for no money because we are ALL headliners.”

I dispute that but I knew that, for me, getting any paid work in Los Angeles was a pipe dream. So I told Julie that it would waste my time and money to go to Los Angeles.

Julie said, “Lynnie, I will create gigs for you.  I promise.”

I said I would spend a week with Julie.

She told me that she had some extra money saved for a vacation that she wanted instead to spend on my visit. She would take care of my accommodation and pay for the transportation I needed to get from one place to another. More important, she would create gigs for me to sold-out houses.

I didn’t really think she would do either, but I love Julie and when we are together we have fun.

So I agreed to spend the last week of my California journey this year with her.

I wrote to Ron Lynch (who is my favorite LA comedian) and told him I would do his midnight show for him if he liked.

Then I got a letter from NBC.

They are doing a reality show called 1st Look, a lifestyle and travel show hosted by Johnny ‘Bananas’ Devenanzio, airing nationally every Saturday after Saturday Night Live. Johnny is the host of 1st Look and famous for his successful appearances on The Challenge, a program that tests physical prowess.

One 1st Look program will be about older people doing something unusual with their lives.

They asked me if I planned to be in New York or LA anytime this year and I told them when I would be in LA. They made arrangements for me to be filmed with Johnny Bananas for their program.

After I committed to doing that show with NBC, I discovered that my dear friend Greta Pontarelli had already done a segment for them and that we would be in the same show together.

I met Greta several years ago in Montenegro… She is in her seventies and is a pole dancer and performer.  She is an amazing woman who can do far more than stunts on a pole, but it is those stunts that have made her unbelievably famous.

And so the die was cast.

I committed to go to LA.

NBC asked if Johnny Bananas could be on Ron Lynch’s show with me and both Ron and I said Yes.