I try to be original in this blog and to tell short (or sometimes not-so-short) stories which have not appeared elsewhere. I was going to post a totally different blog today, but what was published yesterday was too good to miss today.

I went into London for most of the day.

When I arrived at the railway station in the morning, I was greeted by the front page of the Sun newspaper boasting the headline HELL FREEZES OVER.

This referred to Arctic temperatures in the small American town of Hell in Michigan and, according to National Public Radio in the US, this event had caused headline writers to rejoice worldwide.

Their Google News search of the phrase HELL FREEZES OVER early yesterday morning turned up 3,980 results in news outlets.

Yesterday afternoon, I got a copy of the London Evening Standard, where another eye-catching headline proclaimed: POLICE DID ALTER CRIME FIGURES SAYS MET CHIEF.

This referred to fact that Sir Bernard Hogan-Howe, the Commissioner of London’s Metropolitan Police force had admitted that their crime figures were faked and that he had misrepresented to a Parliamentary committee of MPs the findings of a report that he had “forgotten” he himself had written…

The policeman who revealed to MPs that the Met’s official figures had been understated by 25% on sexual offences and had been similarly faked on burglary and other crimes is – inevitably – currently facing a disciplinary hearing by the Metropolitan Police for misconduct.

When I got home late last night, though, I saw on the Smoking Gun website a story that will take some beating in the annals of eye-popping and deserves a mention.

It involves the ex-wife of Pulitzer Prize-winning novelist Cormac McCarthy, author of The Road and No Country for Old Men.

He has, in the past, been described as “publicity shy”.

He must be having a bad week. 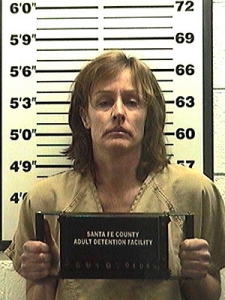 Last Saturday morning, his ex-wife Jennifer McCarthy was with her new 53-year-old boyfriend at her home in Santa Fe, New Mexico. They were having an argument about aliens from outer space. Like one does.

According to Jennifer, they started to yell at each other. As we all know, arguments about aliens from outer space can be passionate affairs.

The boyfriend told her not to touch him again… She touched him on his shoulder with her index finger “to aggravate him”.

According to the boyfriend, after they shouted at each other, she left the house. When she returned a little later, she went into her bedroom and emerged “wearing lingerie and a silver handgun in her vagina”. According to the police report, she then proceeded to “have inner course with the gun”. I am not sure if this is a mis-print or something people actually do when they have a silver gun wedged in their vagina.

At this point, someone said: “Who is crazy – you or me?” It is not clear – from the censored copy of the police report – which of the two said this and, frankly, it could have just as reasonably been said by either. At any rate, Jennifer became so annoyed that she stopped having “inner course” with the gun, pulled it out of her vagina and pointed it at the boyfriend’s head.

Deputy Zook’s “statement of probable cause”

According to his statement to the police, the boyfriend was then “in fear that Jennifer was going to pull the trigger so he grabbed the gun from her and put the gun in the toilet.”

Jennifer, not deterred by this, went into the bathroom to retrieve the gun, so obviously – as one would – the boyfriend took the gun out of the toilet and put it in the trash can outside.

When a policeman arrived – Deputy Chris Zook – he said he retrieved the handgun and “put it in a safe location”. Alas, Deputy Zook does not specify in his report exactly where he put it. One can only surmise.

Jennifer McCarthy was arrested by Deputy Zook on a  charge of “aggravated assault on a household member”.

What the exact legal definition of a “member” might be in a case like this, I can barely dare to imagine. And, given Deputy Zook’s suspect spelling of words, one can only be relieved that he did not mention Cormac McCarthy’s highly-acclaimed No Country for Old Men.