“What is your real day job?” I asked him.

“What?” I asked. “Running a comedy club in Edinburgh while living in London?”

“You make money from it?”

“Enough. I’ve never been massively rich, but I’ve never been uncomfortable. It used to be just two of us running a fairly profitable gig in a pub on Fridays and Saturdays. Now it’s five of us and our new 7-night-a-week venue. The club is not just me – it’s a collective.”

The Monkey Barrel comedy club opened in Edinburgh two weekends ago. It is a two-level theatre, café and bar space with a 100 capacity main room and a 60 seater basement theatre called The Banana Skin.

Ben told me: “My two big comedy club inspirations are Peter Cook’s The Establishment and The Comedy Store in London. But what John Millar – my business partner – and I most want Monkey Barrel to be is more akin to a National Comedy Theatre of Scotland. Or like the Traverse Theatre in Edinburgh – a home for new and exciting writing and performance. We are not just going to be night after night of stand-up.

The opening night of Monkey Barrel

“We want it to be a great home to sketch and improv and comedy theatre too – and, with new media really guiding the development modern entertainment, we want it to be a studio for podcasting and online video content and production. Just a great house for ideas. John and I want to create a great comedy lab and see what happens.”

“It’s not shit,” replied Ben. “It’s just young. Scotland doesn’t really have a strong gig infrastructure outside of rowdy weekend shows, so the sort of opportunities to perform are largely harsh and combative and local. It is not really a place for nuance and experimentation – not if you want to start earning money.

“Because I live in London, I can see first hand what the differences are between the two comedy scenes and honestly I think there is as much interesting and exciting comic work going on in corners of Scotland as there is in London. But, in London, you are just much more free to develop on long-established stages. Though things are certainly changing and even over the last few years comedy and comedians’ attitudes in Scotland have begun to mature and acts and like-minded audiences are beginning to find each other.”

“You used to be a performer,” I said. “Have you stopped?” 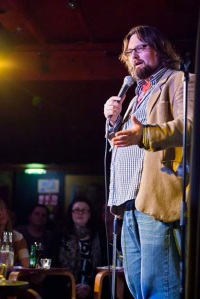 Ben taking a break from his Sabbatical

“I think ‘Sabbatical’ might be the right word,” Ben suggested. “I can’t run and market the club and feel like I’ve earned the right to perform there. I started off doing sketch comedy, but there’s no network for that in Scotland, so you find yourself having to become a stand-up. I was not terrible at that, but it didn’t suit me.”

“Why,” I asked, “is the new venue called the Monkey Barrel?”

“We were running comedy nights in a pub in Edinburgh called The Beehive on the Grassmarket and we just generically called ourselves The Beehive Comedy Club. But we knew we were gonna move and thought: What the fuck do we call the new club? How do you even come up with the correct name for something? So we knew ABBA had come about by putting all their initials together and so we put ours into a word randomizer. It was me (Ben Verth) and John Millar – and one of the things the word randomizer came up with was MERLIN’S HERNIA.

“For a brief moment, after a whole day of this bullshit, going absolutely insane trying to think of a name, we thought it would be a great comic name and we could see the figure of old Merlin all bent over with a wizard sign on the door. But then my missus said: That is an awful name! For God’s sake don’t call it that. Why don’t you call it…I dunno… Monkey… Barrel… So we said: Oh, OK.”

“How long,” I asked, “had you been running the Beehive comedy club in Edinburgh?”

“About five years. We had our 5-year birthday last January, but I mis-counted. It should actually have been our 6-year birthday. We were just doing it Fridays and Saturdays and the occasional New Act night as well. But, when there was a bit of economic uncertainty, people stopped coming to the New Act stuff.

Monkey Barrel is the new comedy contender in Edinburgh

“Now the Monkey Barrel is me and John and our regular host Rick Molland. Chris Griffin is the organisational manager. And a guy called David Bleese, a comedy fan, got on board for the move to the new venue. He used to work with John at the Royal Bank of Scotland.”

“Oh dear,” I said, “There is another club in Edinburgh doing comedy seven days a week. They might be rather vicious if there’s competition? I think there used to be five or six clubs in Edinburgh; then really there was just them… and now you… as competition.”

Ben seems to think the other club is amiable.

“After a rocky first year or so,” he told me, “the old Beehive club started consistently selling out and turning people away, while they (the other club) were also packing out their regular seven nights a week – something which has continued since August when we started our beta-test preview shows in the new venue. So, basically, Edinburgh definitely seems like it has an appetite for weekend comedy. We didn’t go into this with our eyes closed. So I don’t know if the city needs another club, but everything I’ve encountered over the last few years shows it certainly wants one.

“I’ve always been a promoter of some sort and, I think, a decent one – founding and producing The Edinburgh Revue at university, running my own nights at various venues around the city, building up comedy at The Beehive, creating the Scottish Comedy Festival. The real Yes, I can do this! moment came when I met cartoonist and writer John Millar who wanted to do exactly the same thing.  I had the contacts and the know-how; he had the business expertise and the cool head and same ideals and, it must be said, the most remarkable drive I’ve ever encountered,”

“And the new venue is where?” I asked.

“We bought the 17-year lease of a place on Blair Street, just beside the City Cafe.”

“Near the infamous sauna?” I asked. 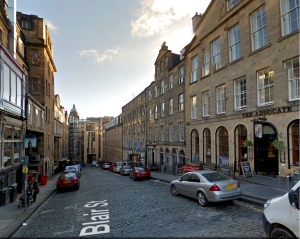 Blair Street seen from the Royal Mile on Google Streetview

“Ah, well, yes…” Ben laughed. “Saunas! We found out very quickly that the landline telephone number we had been given by our phone provider – the one we had started using as our booking line – was originally the phone number of a sauna (not in Blair Street) and it was still listed as their number all over Google. So 50% of the time the phone goes it’s people looking to book tickets.The other 50% it’s seedy-sounding men asking if they can stop by to see Mei Ling (she must be the best one, she’s the most popularly asked for), or can we send her round ‘with some oils’.

“My favourite incident was when a someone rang up asking who was on that night and I said Former Scottish Comedian of the Year Larry Dean… and we’ve got Michael Redmond and… and the voice on the other end of the phone cut me short and asked: Big Jessica not working the night, naw?

“We have been waiting six months to have the number changed. I feel like Mei Ling is the unsung sixth member of staff.  We should maybe start a MeiLing list.”

“Although,” I prompted, “the other organisers of the club are up in Edinburgh, you are doing all this while living in Ealing, London, because of your wife’s job?”

“I am up and down on the train all the time,” Ben said.

“You were born and bred in Edinburgh,” I said. “Do you enjoy living in London?”

“When we first moved to London, we lived in Drayton Grove and, at the end of the road, is the school that was used in Carry On Teacher and the whole surrounding area is where they filmed Carry On Constable. Charles Hawtry’s trousers fell down at the postal depot round the corner.”

“You have a populist taste in movie comedy, then?” I asked.

“I think the greatest four films ever made were the first four Police Academy films. I also love Jon Pertwee’s Doctor Who”.

“So why not,” I asked, “go off yourself and make some comedy B-Movie with cheap special effects?”

“Maybe I will,” Ben laughed.