Dangerfield – a man, a mouth, a shining light

A few days ago, I posted a blog about performer Chris Dangerfield getting ‘clean’ from heroin by spending time in a Thai brothel. Our chat was shortened for length. Below is part of what I cut out. It refers to a time before he was ‘clean’.

“There is no heroin in Patong,” Chris told me.

“Because Thai people don’t have a lot of money and heroin is really expensive.”

“But,” I asked, “aren’t there lots of tourists in Patong?”

“Yeah, but how many tourists use heroin? They don’t say: Oh, let’s go to Patong and buy some smack. Anyway, I went up to Ko Samui a few times and was coming back through Customs with a mouthful of heroin and…”

“A mouthful?” I interrupted. “What would happen if they asked you questions?”

“Well they did,” said Chris. “But the mad thing is that, when you’re like that, you don’t give a fuck. I remember thinking: I could end up in a Thai prison but…”

“You were off your head?” I asked.

“Yeah. I just thought: I’ll take the distraction. There’s a real self-loathing thing about drug addiction. You’d rather end up in prison than deal with Life on Life’s terms.

“Samui Airport is kinda like Tenko. (A famous 1980s BBC TV series set in a Japanese POW camp.) It’s outdoor indoor. There are bushes. It’s not like a normal airport. You can run and you will be on the runway.

“Anyway, I got to the bit where you put your bag in the box and the box goes through the scanner and I’m not shitting myself, but I am aware I have a quarter of an ounce of white heroin in my mouth and, if a dog turns up, I’m in a Thai prison – I’m in the monkey house that afternoon.

“So I put my hand in my pocket to check there’s nothing there before I go through the scanner and – Oh shit! – I’ve got a money bag with about ten used syringes in. My mate had won a holiday on a pack of crisps and he was in Samui, so I had been round his holiday house and I couldn’t leave all my spikes there – that would be unfair – or even in their bin. So I kept them on me and had forgotten because I was smashed out of my head. I had been injecting Xanax and heroin all morning.

“I feel the syringes in my pocket and the guards are waiting for me to go through the scanner, so I just throw them in the bushes casually, like it’s something I don’t need. Not a word is said.

“They always look in my bag when I go through cos the bag has my vape in it with loads of batteries. But they’re fine once they see what it is.

“So it’s OK and I walk off, thinking: Fuck, man, that was a bit stupid. And then she calls me – this female guard – Mistah! Mistah! And I think: Just keep walking! And then there’s another Mistake! Mistah! and then the sound of running feet and I think: This is it! You’ve taken the piss once too often. You can’t keep landing on your feet like the last 40-odd years…

“Then there’s this man’s hand on my shoulder and I turn round: Yeaeaahhh???…

“And I have the quarter ounce of heroin in my mouth.

“He marches me back up to the scanner and I’m thinking: OK. I need to think quickly. How much money have I got in the bank? How much is it going to cost me to get out of this?

“And then they tell me I had left my watch in the box… That was it… I mumble thanks: Mmmm, bmmmm, th… mmvmm… but I was shaking.”

“And now,” I asked, “since your stay in the Thai brothel, you’re clean of heroin?” 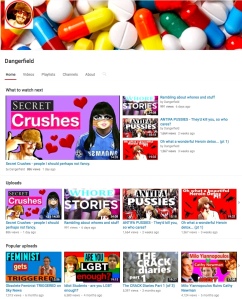 “Yeah. Two months in, I had three-and-a-half thousand subscribers. And they donate money. through Patreon. And enough of them subscribe to make it possible for me to publish my novel.”

“You’ve finished it?” I asked.

“That’s not a novel,” I suggested. “That’s documentary.”

“But half of it is about me growing up,” said Chris.

“That’s still non-fiction,” I told him.

“It’s autobiographical,” he told me, “but it’s a fucking story, alright?”

“What’s your novel called?” I asked.

“Life By Vagina.” He laughed. “It’s a working title. It’s a re-writing of Death By Vagina by Blaise Cendrars. Have you read that?”

“No. What is the elevator pitch for Death By Vagina?”

Death By Vagina: inspiration for Chris

“A psychiatrist has a patient who is a psychopathic sexual maniac and, rather than treat him, he sets him loose on the world. My novel’s beautiful. It’s the best thing I’ve ever done. I’m very very proud of it.”

“Have you,” I asked, “approached a mainstream publisher with it?”

“I’ve got three-and-a-half thousand YouTube subscribers,” said Chris. “By the time that novel comes out, I’ll have about 10,000. If half of them buy it…”

“When will it come out?”

A week ago, I wrote a blog blatantly plugging the fact that Sit-Down Comedy, the 2003 anthology written by 19 comedians which I edited with the late Malcolm Hardee, is now available as an iBook from iTunes and in a Kindle edition.

I said two of the Sit-Down Comedy contributors were considering publishing print-on-demand books. Now a third tells me he, too, is doing the same thing. He is currently checking the proofs.

Dave Thompson co-wrote a very quirky short story for Sit-Down Comedy with Jim Tavare and tells me:  “I am about to publish my novel The Sex Life of a Comedian via Lulu.com after having fallen out with a ‘proper’ publisher.”

Dave explains: “It was what I witnessed at the London book launch of another comedian’s book that made me realise what a shambles I’d got involved with. And then I bought a copy of a book by another comedian I knew and it was bursting with errors. There were so many mistakes, it looked like it hadn’t been proof read…

“From what I hear from other people who get involved in publishing books, publishers rival comedy promoters for incompetence and greed.”

Dave is highly-original. He has written for Ben Elton (they have been friends since schooldays); ITV’s BAFTA Award winning series The Sketch Show with Jim Tavare; Harry Hill’s TV Burp; and, uncredited, for many other Big Name comics. He has even amazingly written for the newly-enobled (as-of today) Sir Bruce Forsyth. Time Out called Dave “one of the finest joke writers in the country”. But, to the public, he is mostly known for the Tinky Winky incident in 1997.

He played Tinky Winky (the purple one) in the world-famous children’s television show Teletubbies but was equally famously fired after American fundamentalist tele-evangelist Jerry Falwell warned parents that handbag-carrying Tinky Winky could be a hidden homosexual symbol, because “he is purple, the gay pride colour, and his antenna is shaped like a triangle: the gay pride symbol”. Ragdoll, the show’s British production company, decided that Dave’s “interpretation of the role was inappropriate” and sacked him.

In Kazakhstan, the Teletubbies are still banned by order of the president who considers Tinky Winky to be a pervert.

The Sex Life of a Comedian is about a stand-up comedian on the UK circuit who gets a job wearing a blue furry costume in a world-famous television show but then gets fired. The story involves drug-fuelled celebrity sex romps, the Mafia and wild parties aboard luxury yachts.

Well, at least no-one in the television or comedy worlds has to worry about it being autobiographical, then.

I have blogged before about the galloping-blindly-towards-an-unknown-destination changes in book publishing.

Sit-Down Comedy has just been issued in both iBook (for iPads) and Kindle downloadable electronic editions.

Apparently, in the US market, electronic books now account for 20% of total book sales. In the UK, it is still only 5%, but it is expected to double in the next year.

In the last week, two of the contributors to Sit-Down Comedy have mentioned to me that they are thinking of publishing electronic books, probably via lulu.com, the same print-on-demand (not to be confused with self-publishing) company which comedy writer Mark Kelly has used to publish his books Pleased as Punch, This Is Why We Are Going to Die and (free to download) Every Get The Feeling You’ve Been Cheated? Comic Shelley Cooper told me she is also looking into print-on-demand publishing.

A highly relevant factor is that print-on-demand publishers may take 20% of your book’s earnings to arrange print and electronic versions… while conventional print publishers doing the same thing normally give the author royalties of only 7.5% of paperback sales. With print-on-demand  you have to market the book yourself, but you also have to factor in that significant difference between getting 80% or getting the conventional 7.5%.

I have blogged before that am thinking of re-publishing Malcolm Hardee’s autobiography I Stole Freddie Mercury’s Birthday Cake (probably revised back to its original version) as an e-book… but that is only if I can actually pull my finger out – always a major factor in the production of any book.