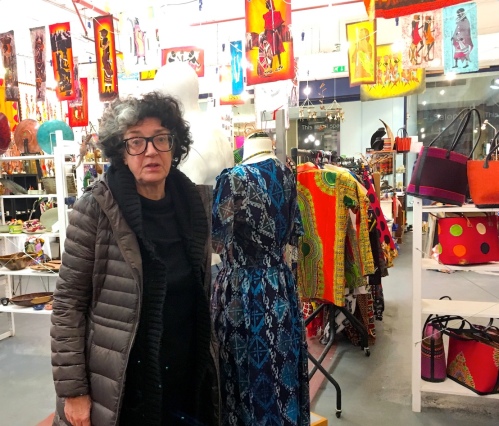 Kate Copstick, doyenne of British comedy critics, founded and runs the Mama Biashara charity which, in Kenya, gives small grants and advice to impoverished individuals, mostly women, to start self-sustaining small businesses which may help them get out of poverty. The charity’s slogan is A Hand Up, Not a Hand Out.

It survives solely on donations and on money raised at the Mama Biashara shop in Shepherds Bush, London. The shop is also the venue for the free, monthly, open-to-all meetings of the comedy industry’s Grouchy Club.

Mama Biashara, in search of more funds for its charity work, is holding a special event in a fortnight (Saturday 7th April, from 2.00pm). I talked to Copstick about it at the shop.

JOHN: So Mama Biashara’s philosophy is…?

COPSTICK: Well, an awful lot of charities are about infrastructure and about ‘things’ – an office or a school or a this or a that. I have always thought you should invest in people and then people can build the things.

COPSTICK: No. They’re volunteers. That’s why I am looking for someone to help build a shed in my back garden in London. I am going to Airbnb my flat and move into a shed in my garden, to try and keep afloat financially.

JOHN: So what’s this Saturday thing in a fortnight?

COPSTICK: You know what it is, for ’twas at the Grouchy Club that this idea was born.

JOHN: What idea would that be?

COPSTICK: To be fair, John, I only have a vague recollection, because quite a lot of Jura had been drunk – a delicious single malt whisky brought to the table by the even more delicious Martha McBrier.

Footfall at Mama Biashara’s shop is affected by supermarkets

COPSTICK: For the last year-and-a-half because the Morrisons supermarket opposite closed, which decimated the footfall. We are now starting to get it back because a Lidl has opened opposite.

At this month’s Grouchy Club, the lovely Samantha Pressdee brought some gorgeous Neal’s Yard stuff and she came up with the idea of a sort of pamper day in aid of Mama Biashara and Martha McBrier revealed herself to be a tarot card reader.

JOHN: As is Samantha…

COPSTICK: Indeed so. She has a done it at the Grouchy Club. And here at Mama Biashara, we have a lovely lady who comes in once or twice a week who sells and uses medicinal grade aromatherapy oil. In fact, the morning after the Grouchy Club at which this plan was hatched I came in, unsurprisingly, with a fairly highly-developed hangover.

I said to her: Headache.

She put a tiny little drop of medicinal grade essential peppermint oil, grown in Washington State, on the back of my hand and said: Lick that.

As you lick it, you have to breathe in. And, well, it is like somebody has taken the top off your head. Suddenly everything becomes clear, your tubes are clear, your chest feels clear… Hangover… gone! Extraordinary.

So she is going to be coming along on the Saturday afternoon. And there will be people doing foot massage and whatnot. I am going to try and get some live drumming music and it may well be that we have a comedy show in the evening.

JOHN: So people will come into Mama Biashara for free and can look around the shop as normal…

COPSTICK: Yes. It’s sort of an open day. And there will be these added extras they can pay to have – the pampering and tarot reading and foot massage and so on. You can come in and have a tarot reading to see what the future holds. For example: Will your show be a massive hit at the Edinburgh Fringe?

JOHN: And the money raised goes to the Mama Biashara charity.

JOHN: This will be in the back bit of the Mama Biashara shop.

COPSTICK: Yes. In the bit where we hold the Grouchy Club and occasionally do comedy shows. When Ngambi McGrath lost the long-time venue for her Heavenly Comedy nights recently, she moved it here until she found a new venue and it was absolutely rammed – I was running around trying to find extra seats.

JOHN: Mama Biashara is a good place if what you are road-testing a show…

COPSTICK: Yes. It’s intimate. There’s no microphone, no proper performance lights but, if what you want to do is get your content tightened, then this is a great place for workshopping. One of the guys who was doing 10 minutes at Heavenly Comedy runs a comedy course and asked if he could do it here which would have been fine except I’m in the throes of a volunteer crisis so I don’t have the manpower or womanpower to keep the shop open on a Tuesday until 8.30pm, except the second Tuesday of every month which is the Grouchy Club.

JOHN: Any other shows coming up here?

COPSTICK: I also offered the space to Alfie Noakes of the We Are Funny project.

An article by Alfie Noakes, as published on chortle.co.uk (Photograph by Steve Best)

He came to see me because he has this Challenge thing going – a topic for an hour-long comedy show. And this topic was initially: Is Radical Feminism Killing Comedy? which was going to be put on at Farr’s School of Dancing in East London. But there were objections from… I don’t know what we should call them. The Ladies of the Left? The Sisters? They objected to the… I suppose to the mere idea that anyone might even debate let alone think such a transgressive idea. 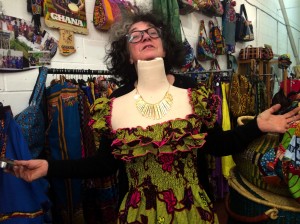 Copstick in Mama Biashara after the Grouchy Club Podcast

Because there was a loud African band playing live in the performance space at the back of her Mama Biashara shop in Shepherd’s Bush. we went to a nearby cafe for the recording.

A man was sitting alone at the next table. This becomes relevant later on.

As normal, we did not discuss in advance what we might talk about. I just switched my iPhone on and started recording. Seven minutes into the 25 minute podcast, we had reached this point…

COPSTICK
I have to say…

COPSTICK
No, I do. I feel I have to say that…

JOHN
Hold yourself back for once.

COPSTICK
… I have never thought testicles… even the late, great and ever-increasingly prestigious Malcolm Hardee’s bollocks – They were extraordinary, but they weren’t beautiful – I’ve never seen a beautiful pair of human bollocks. I’ve seen a couple of very beautiful penises, but bollocks are not beautiful.

But my cat in Kenya. His little bollocks, they were beeauutiful!. Under his tail, obviously, there was the arse…

JOHN
Are we talking about a cat with two anuses here – two ani?

COPSTICK
No. It was just a little hole where his willy comes out. It retracts, John, when he’s not using it.

JOHN
He has a concave willy?

JOHN
I think you should continue the It’s like sentence.

COPSTICK
It was very cute.

COPSTICK
Well, men’s penises retract. Most animals’ penises retract almost totally. You’ve seen a horse. Even a horse, with its massive penis, it retracts for the sake of safety.

JOHN
It doesn’t retract. It shrinks.

COPSTICK
It retracts, also. It kind of gets hooked up. Fish. Most male animals. It gets almost totally sucked back up into the body with a little bit poking out. And my little cat has a little tiny, kind of…

JOHN
My Little Cat. There could be a toy range to be had here.

COPSTICK
Or glabular. What’s it called? Globulus? Glabrous? Glabrous. It means tissue with no hair. Like…

JOHN
Bald. There’s nothing wrong with being bald.

It was around this point that the man sitting alone at the next table in the cafe moved away with his cup to another seat. It was by the window. I guess he wanted to look out at the traffic driving past Shepherd’s Bush Green. We continued talking. The full podcast is HERE.

There will be a live Grouchy Club meeting/show this Tuesday at 6.30pm in the performance area at the back of the Mama Biashara shop in the West 12 Shopping Centre at the south east end of Shepherd’s Bush Green. Mama Biashara is in among the shops by the back end of Morrison’s supermarket. I mention this as the Mama Biashara website is down.

As with our Grouchy Club events at the Edinburgh Fringe, anyone can come. Entry is free.

These are not shows where the audience sits and watches. They are aimed at people in showbiz and the media who want to chat about the business and anything else that comes up. Or, as yesterday, talk bollocks. Anyone can come along. A real chat show meeting. A chance to interact with the doyenne of British comedy critics and some fat, slaphead comedy blogger. We are open to anything including occasional live comedy performances. 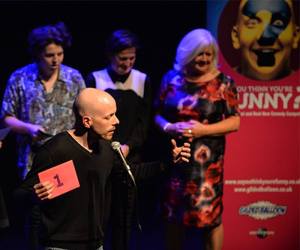 Luca Cupani (bottom left) at the SYTYF Awards in Edinburgh

This Tuesday Luca Cupani, winner of this year’s So You Think You’re Funny? award at the Edinburgh Fringe will be performing new material for his Fringe show next year. But it’s mainly chat between the audience, Copstick and me.