In several past blogs, I have extolled the joys of going to Pull The Other One comedy club in Nunhead, South East London. The format is basically a variety show filled with very bizarre acts with one token stand-up comedian – usually a Big Name – to draw people in.

On Friday, I am going down to – as far as I understand it – mill around and generally get in the way of Vivienne and Martin Soan as they set up for a special 10th anniversary Pull The Other One show. 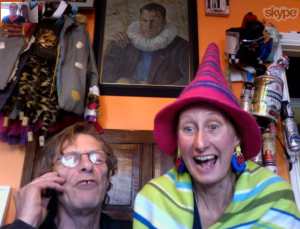 “Is it really ten years of Pull The Other One?” I asked them yesterday on Skype.

“Yeah,” said Martin. “We bought the van ten years ago and did a tour of village halls.”

“In 2004,” explained Vivienne, “we used to visit our various relatives, which took us to places like Herefordshire, Oxfordshire, Norfolk and Huddersfield. And, because we could never afford to go anywhere unless we worked, we would put on a show in the local village hall to subsidise our journey. Our shows were called Soan Alone which was Martin assisted by his wife – me.”

“Do you,” I asked, “think it might have been mis-titled as Soan Alone?”

“Viv and me,” said Martin, ignoring me, “wanted to go to the sort of club that we wanted to be at but, what with us having children, we couldn’t get out and about so much so we decided to create our own club. The Ivy House in Nunhead was then an almost sad pub which only had two or three people in it, but had a wonderful back room with gold lamé curtains and was just crying out to be the kind of club we wanted to go to. When we saw it, we thought We would love to come here to be entertained, but that wasn’t going to happen, so we started our own club there.”

“Having been out of the loop for so long with child care, though,“ said Vivienne, “we didn’t know all the extraordinary, mad, surreal, off-the-wall, bonkers acts that were around.”

“Although,” said Martin, “I don’t think there actually were many around then.”

“No, maybe there weren’t,” agreed Vivienne. “Not like there were when we did the Ghost Club back in 1992.” 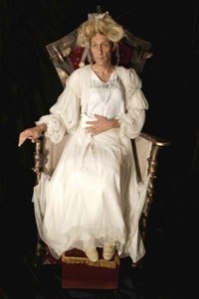 “That was fanTASTIC!” said Vivienne. “It was in Noel Faulkner’s Comedy Cafe. Patrick Marber was the compere. It started off every week with a dance troupe of housewives with ironing boards and washing machines and other everyday household items, but done as a dance routine in the dream sequence of a rather weird birdwatching cyclist nerd, which was Martin.”

“So it had an element of reality,” I said.

“And,” continued Vivienne, ignoring me, “at the end of the dance routine, Martin would say I made that up myself.”

“We used to have herds of cows passing across the stage,” said Martin. “The concept of the Ghost Club was that the Comedy Cafe was at the intersection of two spiritual ley lines and, on certain nights at certain phases of the moon, all the ghosts would come out of this vortex… all the acts who used to perform in the music halls around the East End of London.”

“It just so happened,” said Vivienne, “that it was also on the path of a man who used to herd his cows into town in medieval times. So the cows used to come through as well.”

“Was it difficult to find performing cows for the show?” I asked.

“No,” said Martin. “I built life-sized ones that slowly moved across with a soundtrack of the moo-ing.”

“And we had white table-cloths on all the tables,” said Vivienne, “with lots of crayons and pencils and people used to do artwork on the tablecloths and, at the end of the evening, we had an art critic who would appraise the drawings and we would auction them, which used to subsidise the next show. At that time, in 1992, I was pregnant with our second daughter Sybil and, after that, all our creative activity sort-of went on hold.”

“Anyway,” said Martin, “ten years ago, we went local and went to the Ivy House.”

“Actually,” said Vivienne, “first of all we did Hooper’s Bar and that’s where Pull The Other One’s core of DJ Ratsmilk, Go Diddely and Vincent Figgins (the Edwardian animal impersonator) were created.”

Vincent Figgins (left) and Martin Soan at Pull The Other One

“Vincent Figgins (the Edwardian animal impersonator) goes back that far?” I asked.

“Yes. We had to create our own acts,” explained Martin, “because we didn’t know if we were good enough to run a club so we wanted to keep it in-house. And also we didn’t have the contacts then, having been out of the loop with children for all those years.”

“Vicent Figgins (the Edwardian animal impersonator) is a relation, isn’t he?” I asked.

“And then,” said Vivienne, “there was The Poet Lorry-at, who just wore a lorry on her hat.”

“… and the beginning of River Dance,” added Martin.

There is a clip of Vivienne Soan introducing Martin’s River Dance routine for Pull The Other One at The Ivy House on YouTube.

“The Ivy House shows,” said Vivienne. “started on a Thursday night.” She turned to Martin and said: “Shall I tell the truth here?”

She gave no month.

“And,” said Martin, “that’s when we decided to start booking one solid seat-filling act like Nick Revell, John Hegley, Simon Munnery, Omid Djalili, Jo Brand, Stewart Lee, Arthur Smith or whoever, supported by a lot of unusual acts – some of them us – and booking one big speciality act. Out of that came The Obnoxious Man (Tony Green) who is appearing this Friday… and The Gates of Hell.”

“Malcolm Hardee,” explained Martin, “had one of those Billy The Bass singing fish on his boat and I remember going down there and saying Oh, Malcolm, what’s that? I went over to push the button and he said: No! No! Don’t push the button! And, of course, I pushed the button and it started singing and he said: Oh I fucking hate that fish; I fucking hate that fish! Anybody else would have removed the batteries or even the fish, but not Malcolm.

There is a video of Billy the Bass singing Take Me To The River on YouTube.

“So, for The Gates of Hell, I went out and bought a fish crate and it opens up like a pair of gates and, inside are 30 Billy The Bass all singing at the same time. That’s The Gates of Hell… It’s brought on stage by a couple of monks.”

“And we’ve taken,” said Vivienne, “Pull The Other One to Macclesfield, Bridport, Axminster…”

“And now Leipzig,” I reminded her.

“…and to The Amazing Mr Smith’s village hall,” said Martin. “Then we got chucked out of The Ivy House and carried on doing Pull The Other One at The Tenants’ Hall in Nunhead, then at The Half Moon in Herne Hill – we got flooded out of there – and now we’re monthly at The Nun’s Head pub which we’re very happy with. It’s nice and it’s intimate.” 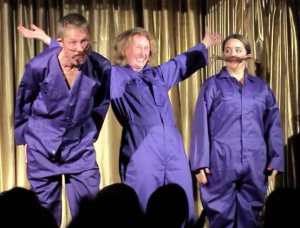 Martin & Vivienne Soan + Holly Burn at Pull The Other One

“So this Friday,” I said, “in honour of the supposed 10th anniversary of starting Pull The Other One, you’re filming it with 5 cameras.”

“That’s right,” said Martin. “The crew are all in their final year at Ravensbourne. Except the director, David Crossman, who used to direct Cannon & Ball’s TV shows.

“They’re making a 25 or 30-minute documentary plus a promo for Pull The Other One and showreels for all the performers. They’re filming me from my loft down to the pub, taking all the gear down there and setting up and basically I want people – comedians – to come down there in the daytime, which is very unlikely, and get in my way and make that part of the documentary a bit more interesting. I’m also trying to get any comedians who know me to phone up from 2.00pm onwards to ask me to build some bizarre prop.”

Martin builds props for other comedians and, to my knowledge, has made at least two vaginas for the Edinburgh Fringe. I think one sang.

There is an old promo video for Pull The Other One on Vimeo.