Does comedian Lewis Schaffer want to be very famous without being famous? 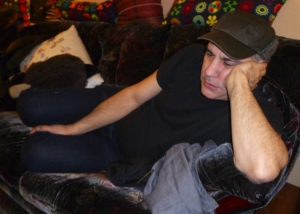 At my home last night: A worried man who is Lewis Schaffer

“To be famous,” I suggested.

Brian Simpson, from Brownhills in England’s West Midlands, is the character comedian who plays the part of American Lewis Schaffer on-stage (and now, most of the time, off-stage too). He spent New Year’s Eve at my home with me and my eternally-un-named friend.

“No it didn’t,” said my eternally-un-named friend. “You just stopped dying it black.”

“OK, I stopped dying it,” agreed Lewis Schaffer. “But I’m surrounded by young people and it’s really bothering the hell out of me.” 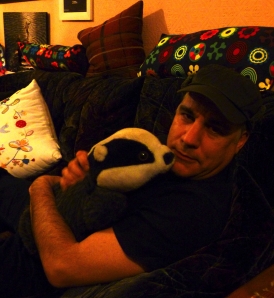 Lewis Schaffer with a cuddly badger on New Year’s Eve

“Why do you get less happy if more people are interested in Lewis Schaffer?” I asked.

“I’m happy that I’m doing better. But the more people come up to me, I’m thinking: Where were you two years ago or five years ago? Did you call me then? Were you interested in me then?”

“Members of the public?” I asked.

“So,” I said, “if club owners and promoters want to book you, you’re worried about working for them because they didn’t want to book you when you were not such a good act?”

“Even if I am better,” said Lewis Schaffer, “there’s always the chance things can go wrong. People are booking me now because they’re just reacting to some sort of increased interest in Lewis Schaffer without taking into account what Lewis Schaffer is really all about.”

“So what is Lewis Schaffer really all about?” I asked.

“It’s about chaos,” said Lewis Schaffer. “It’s about going into a place and creating a level of chaos that shakes things up and that, hopefully, people find interesting.”

“I think,” I said, “you’re just rationalising the fact you prefer not to keep to a script.”

“Yes, I am rationalising it,” said Lewis Schaffer, “but I have to figure out what the benefits of it are. There are benefits to everything.”

“What’s the benefit of being more famous?” I asked. “More money. More recognition. More ability to do what you want to do.” 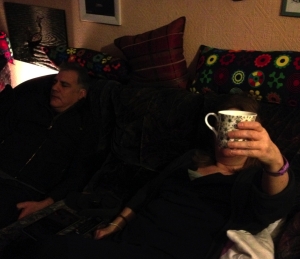 “Do you think you’ll stay in your flat in Nunhead for the next ten years?” asked my eternally-un-named friend.

“The only other person I know from Brownhills,” I said, “is Adrian ‘Nosey’ Wigley. I booked him on The Last Resort With Jonathan Ross in 1987. He plays the electric organ with his nose. He got in touch with me again recently. He’s playing gigs in Blackpool clubs and hotels as part of a singing duo. Did you know him in Brownhills?”

“No,” replied Lewis Schaffer. “What sort of songs do this duo sing in Blackpool?”

“I don’t know,” I explained. “That’s all he told me: that he was in a singing duo. According to his Facebook page, from April to November 2011, he was a donkey minder at Blackpool Pleasure Beach.”

“What about Erin O’Connor?” Lewis Schaffer asked me.

“Erin O’Connor,” Lewis Schaffer repeated. “She’s an English model. I taught her when I was teaching the drama group at Brownhills Community School.”

“Have you ever actually been to America?” I asked.

“A couple of weeks ago, I did this online ad for Skype/Toshiba. I was in London and I talked to people on the street in New York. I’m only in it twice – for about ten seconds!”

“Last Friday and Saturday,” he continued, “I did a couple of private parties in the West Midlands. I do these amazing gigs there every six months in one of those run-down old pubs; Lewis Schaffer is a huge hit in Cradley Heath.”

“I think Johnny Sorrow’s very popular up there too,” I said.

“It’s a small room,” continued Lewis Schaffer, “but we sell out these shows. They start at 8.00pm and they usually last about four hours with three or four breaks.”

“Just me, doing all of my comedy. It’s like luxuriated comedy. I go there every six months and someone who was there invited me to do his own private party.”

“A sex party for people in their Seventies?” I asked.

“So you said, for the price of a pair of spectacles…” 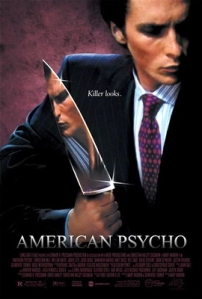 “I used to wear the same glasses,” explained Lewis Schaffer, “as the guy in American Psycho.”

“Except the guy was successful,” replied Lewis Schaffer. “But, as soon as I become famous, people will be tired of me. Look, on New Year’s Eve I’m with you, John Fleming, and your eternally-un-named friend. What does that say about me? I’m in this house of yours, which is like my ex-wife’s aunt’s house in Elgin in Scotland.”

“Elgin?????” burst out my eternally-un-named friend. “I lived in Lossiemouth, which is just north of Elgin. My father was in the RAF and got posted there when I was about 17. It was the most foreign country I’d ever been to.”

“Yes!” enthused my eternally-un-named friend, “because, in every other country, you go out shopping with your mother and, at some point, she always says: We’ll have tea and a cake. So that’s what you look forward to. A tea and a cake. But in Elgin, you go round the town and you go for tea and… no cakes. There was only a dry oat biscuit without even any butter on it. And you think: Hello! I’ve lived in Cyprus, I’ve lived in Germany, I’ve lived in Southampton, I’ve lived in Devon. They had meringues in Devon. In Germany, they had Black Forest cakes.” 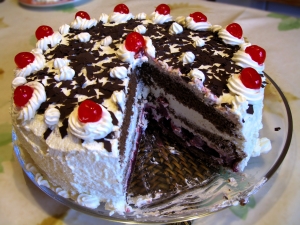 A recently produced Black Forest cake from a united Germany

“Scotland was the only country without cakes,” said my eternally-un-named friend.

“The English stole our cakes,” I told her.

“Everywhere else does cakes and treats,” continued my eternally-un-named friend.

“The bastard English stole our cakes,” I insisted. “We had cakes before the English came.”

“Well, that’s what you heard,” insisted my eternally-un-named friend. “If you bought a chest of drawers, you wouldn’t be surprised to find some porridge in the corner of a drawer.”

“That’s what they do up there,” said my eternally-un-named friend. “Then my parents divorced, because my mother couldn’t take it. After a year, she said: I’ve had enough of this. I’ll go back down to the South of England and open a nursery school. So my father commuted every weekend. He drove down in a Dormobile and slept in lay-bys on the way down and found people killing themselves with their exhaust pipes.”

“Did he really see that?” asked Lewis Schaffer. “Or did he just say that?”

“I would think he saw it,” said my eternally-un-named friend. “He was in the RAF. He was that sort of person. He would notice things.”

“People are starting to notice me,” said Lewis Schaffer. “I’m not sure I like it.”