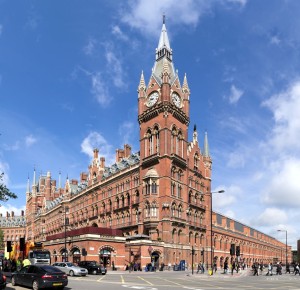 St Pancras – once a featureless black shape of nothingness

In Remembrance of Things Past, Marcel Proust described how memories of his entire childhood came flooding back to him after he drank a spoonful of tea in which he had soaked a piece of madeleine cake. It was the smell and the taste which brought it all back.

“Suddenly the memory revealed itself,” he wrote. “The taste was of a little piece of madeleine which on Sunday mornings my Aunt Leonie used to give me, dipping it first in her own cup of tea. Immediately the old grey house on the street, where her room was, rose up like a stage set and the entire town, with its people and houses, gardens, church, and surroundings, taking shape and solidity, sprang into being from my cup of tea.”

In yesterday’s blog, I mentioned that my eternally-un-named friend had been cleaning the top of a very old bedside table. She used turpentine and methylated spirits. I had not smelled them for years when my mother used to clean things. It brought back the smell of Brasso cleaner throughout my early childhood. My mother liked to collect lots of brass ornaments which needed constant cleaning.

No, my entire childhood did not come flooding back to me. I have a notoriously shit memory.

And no, of course I have not actually read Proust’s À La Recherche du Temps Perdu. I am not that mad. It goes on forever and it is nearly 1.5 million words long.

I looked it up on Wikipedia.

Things get better, easier and faster.

But the smell of turps and meths did remind me that period feature films almost always get the details wrong.

I saw a film last night which was partly set in London at the start of the 1960s.

Like almost all period films, it got details wrong. For one thing, as always, the men’s hair was too long. Until after the Beatles became successful, British men wore military-type short haircuts.

And – again as per normal – they got the buildings wrong.

When I came down to London for the first time, I came from Aberdeen, which is known as “the granite city” because it was built of grey stone and, in my childhood, occasionally sparkled in the sunlight.

Buildings in central London back then were black and featureless, covered in a layer of black soot. When I walked along Whitehall for the first time, it was a canyon of black.

You could not see the gloriously OTT Gothic detailing or the fact it was one of the maddest buildings in the world. You did not see the brickwork and the twiddly bits. You just saw dull black sooty shapes.

Edinburgh’s old town, viewed from Princes Street, was just a hill of smoking black shapes, like the clustered remnants of a big fire.

I remember, as a small kid, being in a cafe at Edinburgh’s Waverley railway station. They still  had steam trains back then. Like all railway cafes back then – like all cafes – it was filled with smoke. It was a dreich day. Almost everyone in the cafe was smoking cigarettes in the enclosed space. Outside, in the main station concourse, almost everyone was smoking and that pollution mixed with some of the steam and smoke from the trains. The stone walls were – of course – black. If you touched them, your fingertips became black because there really was a layer of soot on the walls.

Outside, throughout the city, chimneys were smoking on the roof of every house and any factories around the town were belching out smoke. It was only later that a technology was developed to blast the soot off buildings.

Life gets better. Mostly. Slowly. And with setbacks.

Though most of it still stinks like an early 1950s St Pancras station.