So I got this email: from Cameryn Moore:

We’ve met once before, the night that I told a story about one of my phone sex clients at Stand Up Tragedy, in the spring of 2015. Now I’m collaborating with Stand Up Tragedy‘s Dave Pickering to bring the UK something entirely new.

You could call me the Pied Piper of pervs; my Smut Slam storytelling open mic has drawn tawdry true-life tales out of people all across the U.S. and Canada. This January I’m leaving a network of eight Smut Slam branches around North America and coming to the UK to launch an entire circuit there. I’ll be hitting Bristol (Jan 10), London (Jan 11), and Brighton (Jan 12) in rapid succession, with Manchester rolling around later in the month (Jan 31)

Open mic hosts know that one unexpectedly “blue” anecdote can derail a show. What happens when the whole show is blue? 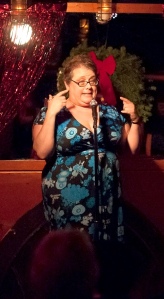 Obviously, I had to talk to her.

“Yes,” said Cameryn, “Slam and dirty stories. Poetry slams are set up for championships and are very competitive. In this case, we only called it a ‘slam’ because people are competing for sex toys. It is an astounding motivator for most people.

“It is like an open mic night?” I asked.

“The way I do it at the Brighton and Edinburgh Fringes is it’s like a cabaret. But the Smut Slams in London and Bristol and Brighton and Manchester are open mics. Every Smut Slam I have ever done since 2011 has had an amazing mix of stories.”

“What sort of audience do you get turning up to hear smutty stories?”

“What sort of audience do you get turning up to hear smut?”

“It depends, to a large part, on who I am collaborating with. In the UK, I have found co-producers for  every city. In London, it’s Dave Pickering from Stand-Up Tragedy so he is drawing on his storytelling audience. In Brighton, it’s Mathilda Gregory, who does storytelling and erotica. I do outreach to the kink communities and to comedy audiences because, while the point of Smut Slam is not comedy, most sex stories can get awkward and funny pretty quickly.”

“I would say,” Cameryn laughed, “that ‘awkward and funny’ are definitely high points.”

“And you want to set up a circuit of Smut Slams in the UK?”

“My goal is to relocate to the UK, so I want to set up a circuit – like the old-time travelling preachers.”

“I am,” I told her, “sure preachers will be honoured for their sermons to be compared to your shows.”

“Well,” she replied, “I have had people say I am doing God’s work and, while I don’t believe in God, I do believe there is something important in gathering people together and having some open, honest, authentic discussions about sex. That is one thing lacking in our society today. There is sex-sex-sex everywhere. But it’s all about sales and marketing. There is nothing being sold at Smut Slams except this sharing opportunity that most of us don’t have.”

“But,” I asked, “are you not titillating the audience to get some cash?”

“Sure,” she replied. “I am hoping to make some living money, but I don’t think that’s any more of a problem than social workers who get money just for listening to people. I have a sense of mission about it, but I’m not an altruist. Obviously sex will titillate, but people will come to these things and find out it goes a lot deeper than that.”

“Into which depths does it go?” I asked.

“What Smut Slam offers is a safer place where people can share. That is cathartic; it is community-building. People can hear their own experiences reflected from on stage. Or share entirely new experiences they maybe haven’t known before. It’s almost educational. Those are the deeper things. It’s a learning experience.”

“So you’re a preacher and a teacher?” I asked. 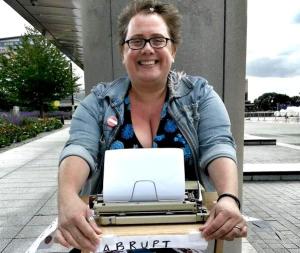 “I tell the opening story. I set the guidelines. I build the segues between the storytellers. But the great thing is it’s not me doing any educating or outreaching. It’s other people who are willing to be brave and stand up.”

“Isn’t this,” I asked, “the audio equivalent of voyeurism?”

“It is. Exhibitionists need voyeurs. There are going to be people who just rush the mic, desperate to tell their stories. But there will also people who are feeling a little intimidated by the microphone.

“We have something called the Fuck Bucket – a receptacle into which people put an anonymous question or confession. That is a raffle pot for the end of the evening but I also read the slips during the course of the night. And people feel they are contributing and sharing even if no-one knows it’s them.”

“Some people,” I suggested, “will surely make up fantasies?”

“I don’t have any way of verifying. But the guidelines are that all the stories need to be real life.”

“What is your background?” I asked.

“I identify first and foremost as a playwright and performer. I have done five solo shows since 2010 and I have done phone sex for the last 7½ years, which I have now quit.”

“Why do you want to relocate to the UK?”

“I have spent three summers touring the UK and feel there are markets for the Smut Slams and my own shows because ‘Fringe’ is such a strong culture in the UK but not in the US. I am a non-traditional performer – I started late – I’m 46, I’m what you would call unconventional looking. Also, I will be honest. I am following true love. It is a Brit I met when I was touring the UK in 2014.”

“Why settle in the UK not the US?”

“When we talked about where we could be together, there was the States or the UK and – after the major electoral events in 2016 – both are turning into these incredibly horrible pits of bigotry, right? – it came down to: Which place has more guns? Let us not go there.”

“You are,” I said, “a multi-award-winner for your shows.”

“Phone Whore got a number of awards across Canada,” said Cameryn. “Slut Revolution got an award. My fifth show is Nerdfucker, which I’m bringing to the Brighton and Edinburgh Fringes this year.”

“You have,” I said, “written ‘pornography as street performance’… Is this legal??”

“In most places,” said Cameryn. “Unless the police tell me to hustle along.”

“Well, she explained, “It is not strictly pornography; it is erotica, But the phrase ‘pavement pornography’ has nice alliteration. In North America, I call it Sidewalk Smut. I just set up my manual typewriter on the sidewalk and do custom erotica for people who come up and commission it. I will be doing more of that in the UK when the weather is good which is – what? – maybe two weeks in the year?”

“You are an optimist,” I told her.

“I managed to do it in Edinburgh,” she explained. “Underneath the arches in Cowgate.”

“So,” I asked, “if I came along and asked for a bit of stuff about having sex with a giraffe, you would write me a short story about it?”

“Insects or aliens laying eggs inside you,” explained Cameryn. “That’s something people like.”

It does, indeed, exist.