I love going to Sweden because it has the cleanest air and healthiest lifestyle of any place I have visited yet in my non-stop world travels. The vegetables are organic and the animals have a very happy life until they are butchered – humanely – so they are tastier and less likely to mess up our digestive systems. 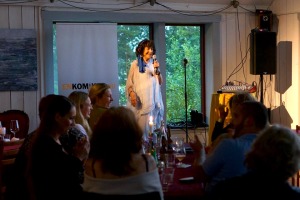 The medical system is magnificent. If you have a strange and upsetting symptom (and, at my age, I have them every day) you take a photo of the place that hurts or itches or looks like it is about to fall off and open an app on your phone. You send that photo to a GP who discusses your symptom with you on the phone and then he or she phones in a prescription to a pharmacist near you. All fixed.

Pets are such big business that every pet owner has mega insurance for their animal friends. The animals are so well cared for that they are welcome almost everywhere, especially in the country towns.

The streets are immaculate and safe to walk at any hour of the night or day. But there is a downside: Swedish people take recycling so seriously that they do not have enough trash to use to create heat and energy.

One of the best things about Sweden, though, is their understanding of human psychology.

Everyone knows how tense and nervous students in universities are but only Sweden has done something about it.

That is why, at 10.00pm, all activity in every university stops country-wide and the young scholars may be heard screaming, shouting and howling.

This is known as the ‘Flogsta scream‘.

OK, Scandinavia is known for its high suicide rate but that reputation is false for Sweden. Their suicide death rate is actually far below the United States and France.

In 2011, the number was very high, but Finland beat Sweden by far this year.

Part of the reason that the rate has decreased so dramatically in the past eight years is because the Swedish Tourist Board stepped in and decided that they would reach out to their lonely people.

They created a free Lonely Line and called it ‘Dial-a-Swede’.

If you called 46 771 793 336, you were connected to a random Swede anywhere in Sweden to talk about anything you wanted.

However, now that they have the suicide rate under control, that number is unavailable. If you get depressed in Sweden these days, your only recourse is to call a Finn.

He will listen because the Finns are always too drunk to hang up.

I arrived at the Arlanda Airport at 4:30 in the afternoon with an 8.00pm show at Kärleksudden, a restaurant overlooking a lovely lake in Norrtälje.  I was greeted by Magdalena Bibik-Westerlund and her beloved dog Zumo, part greyhound, part Labrador, mostly human.

It turns out that Zumo has his own medical team because he has a tendency to get rough elbows and dirty teeth. As thanks for caring for Zumo, his vets get free tickets to the comedy shows presented by the Stockholm Comedy Club. That is why the entire veterinarian staff came to the show along with another couple with two miniature whippets.

The entire show was in Swedish until I got on stage when we switched to English. It was lovely to tell a joke, pause and hear joyous laughter, barks and growls all at once.

One of the other comedians, Naghmeh Khamoosh, is from Iran and does comedy both in Swedish and English. I was struck once more by how ignorant we Americans are who can only speak one language. Everyone I met in Sweden could speak at least three.

The next night, we initiated a brand new yearly event at Café Gamla Hotellet in Skebobruk. The Stockholm Comedy Club hopes to eventually establish an annual comedy festival there, out in the open with a beautiful view of the countryside.

The audience was a mature one, mostly in their sixties and seventies, which meant that I had to adjust the content of my set and the speed of delivery. English is not spoken as fluently by the older set in Sweden.

This kind of challenge has become standard as I travel the world. People in other countries can understand textbook English easily, but speech filled with idioms and double entendres is often too complex. Also, the majority of this audience had never been to a stand-up comedy show before which meant they were uncertain about how to respond.

Saturday night was Ladies Night at the Bibik-Westerlund house and we four performers ate fresh strawberries and listened to stories of each others’ lives. Women really like to do that. Rosie’s story struck me especially.

She was shuttled from Switzerland to Sweden and back as a child. Her mother was a prostitute. Her father was a pimp. She was sexually abused and turned to drugs, alcohol and tobacco to shield her from her loneliness, her misery and her pain.

As I listened to her, I was amazed at what a positive and warm human being she became. So many people blame their upbringing for their lousy personalities and I was listening to someone whose life had been a nightmare. Yet she was as kind, cheerful and giving as anyone I have ever known. Rosie taught me that no matter what our history we have control over what we can become.

Sunday night we all were invited to Naghmeh Khamoosh’s home for a feast. Naghmeh and her husband Morteza and their twin daughters were originally from Iran. The Iranian community is very respected in Sweden.  They are mostly professional people and are known for their beauty their graciousness and their excellent food. Naghmeh is a stand-up comedian which, to me, is amazing since she has also brought up her twin daughters and helps run a private heart clinic with her husband who is a heart surgeon. Dinner was magnificent and Zumo the dog was a perfect gentleman. He only ate the food we dropped on the floor. Everyone said he was THE perfect guest.

I have been invited back to Stockholm to give a dog-friendly New Year’s Eve show. It is obvious to me that Swedish dogs, unlike the rest of the world’s less-sophisticated canine population, enjoy good theatre and like to have a good laugh when they welcome in another year.

We humans want the same thing but we need alcohol to make it happen.

All Zumo needs is a belly rub.

I am hoping I get a belly rub as well.

There is a hot 78-year-old Swede who has offered.

There is footage on YouTube of the ‘Flogsta scream’…