Anna Smith in her Vancouver hospital after the operation

Stripping and stand-up comedy have often gone hand-in-hand in London.

The Windmill Theatre was a famed training ground for post-War British comics and, in the 1980s, the original Comedy Store was above a strip club and was co-founded by strip club owner Don Ward.

The So It Goes blog’s occasional Canadian comedy correspondent Anna Smith is, I’m glad to say, recovering well from her St Valentine’s Day operation in Vancouver to get a Dacron patch sewn onto her aorta. She tells me:

“My scar is looking less like one made by an attack with a ravioli cutting wheel and more like I’ve been flayed between the breasts by an accurate whip enthusiast.”

Anna was around in the early days of British Alternative Comedy in the early 1980s. She knew both the strip club and comedy club worlds. She tells me:

“Me trying to be funny in the UK  started in about 1981 and ended in about 1986… interspersed with exotic comedy/dance stints in Belgium, France, Finland and Australia.

“I was often called an exotic dancer; sometimes I felt more like an exhausted dancer. When I was working in London, I was running up and down stairs in Wardour Street and Old Compton Street and even strayed as far as Mayfair to dance at a ‘hostess club’ where, as far as I could tell from what was going on in the toilet, the poor beautiful young hostesses were making a lot of money vomiting for a living.

Poster for the Gargoyle and Nell Gwynne club

“The Nell Gwynne/Gargoyle was the best though, because  most of the other clubs only offered one ‘spot’ per night.  At the Gargoyle, the pay per show was less, but we did three shows and could leave our costumes there in the freezing gloomy dressing room. There was also theatre style seating and a real stage and a choice of backdrops (crescent moon and stars, English garden, Arabesque) and an appreciative audience of the trench coat type.”

“I remember Joe, the elevator operator, and Peter Rosengard, the Guinness record holder for insurance sales (who started the Comedy Store with Don Ward), gliding about behind the scenes. Don and Peter had figured out there was a need for comedy entertainment but they really didn’t have a clue how or why it was happening… It was like a couple of kids playing with a chemistry set and all of a sudden the whole thing went BOOOF! But, even then, they still didn’t understand it and were still keeping a lot of bad acts and sacking talented people like myself (and Vivienne Soan).

“It could become confusing with half the people changing stage names on a regular basis. Sometimes we did that to find a name which would look more memorable on the playbill; at other times, we just did it to harass one another. I used to love irritating Sir Gideon Vein (aka Tony Green) by referring to Bob Boyton as ‘Bob Boynton’.

“Sir Gideon would rage: It’s Boyton! – Boyton, I tell you! but I would then call him Bob Boinkton.

“Tony Allen was frequently the compere for the Comedy Store Gong Show. He was a great compere. Some of the others would say something demeaning as an introduction – not very encouraging at all – but Tony Allen gave us a fair intro, reducing the chance that the drunken audience would hurl their shoes at us. 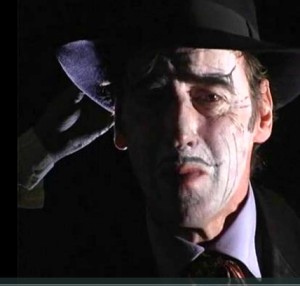 “He also encouraged me personally and gave me practical suggestions about how to improve my act. When I recently ordered his book Attitude – The Secret of Stand-Up Comedy because I wanted to read about Sir Gideon Vein , Ian Hinchliffe and others, I was shocked to find that he had written a sentence about me in it. I’m in the index as Annie Smith, somewhere after Richard Pryor. What an honour that he remembered me – although it was in the context of comics removing their clothing.

“But so what…as you mentioned in a recent blog this WAS during the time of The Romans In Britain.

“One act I particularly remember was a great voluptuous Canadian dancer from Winnipeg, named Karen. Her shows were completely unique. She danced solely to classical music and wore long pastel gowns and hats which had her resembling a Georgian shepherdess – a stark contrast to the rest of the acts who were sheathed in skin-tight leather, ripped stockings, and other rough punky styles popular in the 1980s.

“Karen was a lovely person to work with. She told us she’d had to flee Canada because she had been a young school teacher in Winnipeg and some incriminating letters between herself and an amorous seventeen-year-old boy were discovered. In those days, seventeen-year-old boys were not permitted to have such thoughts about their busty young teachers. So Karen fled to London where she found immediate employment at the Nell Gwynn Club… and many new admirers.

“One was an older, moustached employee of British Telecom who was so besotted with Karen that he followed her to our weekly Sunday afternoon sherry parties on Royal College Street. The telecom man seemed out of place because everyone else there was a performer: Randolph the Remarkable, Sir Gideon Vein, John Hegley. Ben Elton and Peter Elliot (ape expert to the film industry).

“We would sit in a large circle on the floor of a friend’s bedroom drinking sherry and pass round an enormous spliff….and then decide what children’s games to play, Sardines was a favourite, as it was a four storey townhouse with plenty of hiding spots.

“I think  the man from British Telecom was having a rough time in his marriage and was soothed by sleeping with the insatiable Karen and playing rowdy children’s games with a horde of comedians sloshing around scantily-dressed young strippers… It was a delight beyond his previous imaginings.

“I don’t have any photographs of Karen or even know her real surname – Oh, the tragedy of using fake names! – but I would really like to locate her.

“It’s an irony I have no photos of her, because Karen was a highly skilled photographer who took excellent portraits of the dancers sitting in the dressing room of the Nell Gwynne/Gargoyle Club. This was a cavernous windowless room with four lengths of plumbing pipe rattling with empty coat hangers, from the days when there really were floor shows and spectacular shows. Tattered bits of old costumes used to flutter from the plumbing pipes and, on the floor of the closet in the corner of the room, lay a crumpled iridescent mermaid tail, dusty and abandoned….as if the mermaid had eloped decades ago and moved permanently to St Johns Wood.

“The odd thing is that this vast, chilly dressing room was for the exclusive use of four or five exotic dancers. We even had a ‘secret staircase’ to ascend and then, through a doorway, we could watch the acts performing at The Comedy Store. The comics had no dressing room. They just wandered back and forth in a narrow hallway beside the kitchen clutching scraps of paper, nervously talking to themselves and sometimes juggling things or trying on noses or wigs….

“The mysterious Karen was last seen in London, but has probably travelled widely since then. I know she took some great photos of me and the other dancers in that dressing room. I would love to see them, because they were works of art… and to add to my portfolio which is surprisingly sparse, considering I spent more than fifteen years on stage.

“I suppose I ought to contact Randolph the Remarkable as he was friends with her and I see he is still active, tango dancing and posing in photographs as The Little Mermaid.

“Sometimes I fear I will have to spend the second half of my life researching just exactly what I was doing for the first half.

Norwich comedian Dan McKee read my recent blog about Steve Coogan’s planned film Paul Raymond’s Wonderful World of Erotica and my stories of wrestling bouts in the Raymond Revuebar entrance lounge and a cheetah which was trained to strip the underwear off girls with his teeth.

“There used to be an old wrestler up here in Norwich,” Dan tells me, “who drank in a very strange pub I frequented called the Ironmongers Arms. He was called ‘Bear’ and he once told me a story about wrestling in a strip club in what he called ‘naughtly Soho’ down in London.

“One night, when Bear was halfway through a bout with another wrestler in this club, a ‘fucking massive cat’ leapt into the ring and, not wanting to break the ‘kayfaybe’ of the moment, he ended up wrestling the beast for a few minutes before it got bored and walked off.”

This does, indeed, sound like the Raymond Revuebar, but the Ironmongers Arms in Norwich appears to be just as bizarre. For starters, Dan tells me it is the only pub in the UK with that name.

“The peculiarities of the old Ironmongers Arms knew no bounds,” Dan tells me. “The landlord had no tongue, but he did have a pet jackdaw which hopped around the bar and Friday night entertainment consisted of a young lady singing the hits of Tina Turner. She didn’t sing to karaoke tracks but actually sang over the original Tina Turner records on the juke box and she just tried to sing louder than Tina’s vocals.

“Then there was the night somebody brought a sheep in for a pint. We asked him why he had come in with a sheep and he replied: Well, I couldn’t very well leave it at home.

“As we couldn’t fault his logic, we didn’t ask any more questions. We always hoped he might come in again, but he never did.”

I worked in Norwich for two years. This sounds relatively normal.