Edinburgh Fringe, Day 21: Tampons and how obscenity can be subjective

WARNING: USE OF EXTREME LANGUAGE IN THIS BLOG 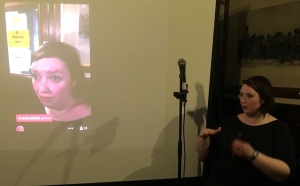 Helen, sitting in a room with a Periscope and 1,200 visitors

In the afternoon, I took the plunge and went to Helen Wallace’s Up Periscope at Southside Social.

She claims it is the only Fringe show which can (and has) had one member in the audience and 1,200 people watching.

She livestreams it on Periscope, interacting with the live audience in the room (today, well into double figures) and with the online audience. More complicated than it sounds. Very well handled by her. And ripe for development in future years.

Being a woman of taste, she then packs up every day, leaps out and races to get to the increasingly prestigious Grouchy Club round the corner to The Counting House.

Today, the audience there included five of the people involved in Malcolm Hardee – Back From The Drink… a comic play to be put on by ex-squatters who were evicted from the late Malcolm’s Wibbley Wobbley floating pub. Nothing to do with me. 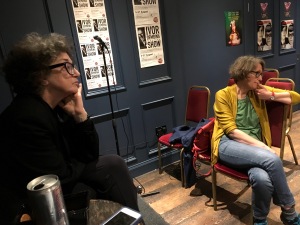 Also there, was performer Jane Hill whose show is titled Cow.  I learned a lot in the ensuing discussion between Kate Copstick and Jane in that – something I had not known – calling someone a “cow” is, it seems, much more offensive in Glasgow than elsewhere in the UK – more severe, even, than in Edinburgh.

It seems – and I can only pass this on as discussed – that the word “cow” is a far more offensive word in Glasgow than the word “cunt”.

But the use of the phrase “Yer a cow” in Glasgow is liable to lead to the use of cut-throat razors and the infliction of Glasgow Smiles.

These are the sort of useful life tips you can only hear amid the comedy industry chat at the Grouchy Club.

Jane Hill had actually arrived to clarify exactly how she had once made tampons, as I had mentioned it in a blog two days ago.

She was keen to point out that, rather than knitting condoms as part of a cottage industry, as I had fantasised, she had been employed in the “tampon hand assemblage” business in Portsmouth.

After that, I should point out, she pursued a highly prestigious career in independent radio and the BBC. 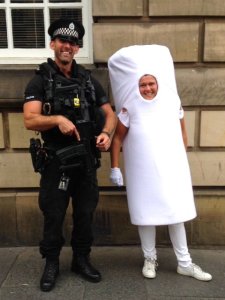 Suggestions for Cunning Stunts are, strangely, now coming out of the woodwork despite the fact the Malcolm Hardee Awards shortlist was announced on Monday.

Later tonight, I got a call from the director of the aforementioned squatters’ play Malcolm Hardee – Back From The Drink – with unlikely cunning stunt possibilities to publicise it… Alas, simultaneously too late for the Malcolm Hardee Award nominations AND too late to get any media publicity before tomorrow night’s performance.

Despite allegedly having done a lot of research on types of cunning stunt, said director had not realised I was involved in the Malcolm Hardee Comedy Awards. But he said they had been discussing a (non-destructive) stunt at the Awards Show (two days after his show, so hardly going to help publicise it.)

I am not sure which of us was more confused at this point.

I then opened my email and there was a message from the US highlighting, once again, the importance of advance research. It said:

I’d like to invite MALCOLM HARDEE to be featured on our TALK BUSINESS 360 “Industry Innovators” TV program which airs on American Airlines during the entire month of December 2017.

The good news is we’re extending a remnant rate this week of only $3,995 (normally 11K) for production, distribution, and re-usage rights for a 2-minute video, making this an affordable vehicle to communicate your message and grow your brand.  Please contact me as soon as possible for more details as space is limited.

Great rate and a real honour to have Malcolm recognised as one of the “Industry Innovators”!

Where would the recording take place and what date? I will then arrange to have Malcolm’s ashes shipped to wherever is best for you.

He drowned in 2005, so there will be a lot to catch up on in the recording. Will there be an interviewer?

So far, no reply.