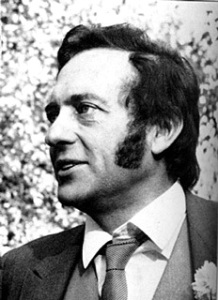 In my last blog, I mentioned I had buggered my back.

Before that, I went to a one-off screening of Terry Gilliam’s 1977 movie Jabberwocky.

Before the screening, Terry Gilliam mentioned what it was like working with Harry H Corbett.

Corbett achieved fame in the BBC TV sitcom Steptoe and Son and played a small but memorable part in Jabberwocky. Terry Gilliam said:

Harry H Corbett – Steptoe & Son – brilliant, absolutely brilliant. But there was a little problem on Jabberwocky.

My wife Maggie was head of the make-up department and she had to go see Harry and talk about his medieval haircut.

He was there with a nice full head of hair.

She said: “We can do it by cutting it like this…”

And he said: “Neuwaaagh….” and said he thought maybe a wig would be better.

So Maggie goes into her kit and pulls out a wig and starts putting it on him and she’s fiddling with his head and his hair is… Wait!… He is wearing a wig already!

And he was not going to have that trimmed in a medieval style. Clearly.

So, throughout the whole film, he is wearing a wig over a wig. 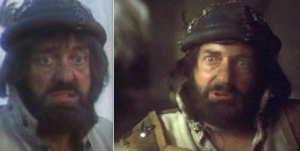 Harry was brilliant. I wouldn’t say he was the easiest person to work with, but he was absolutely wonderful.

When it came to lying under a bed and getting the bed squashed on him… He was happy with those things.

It was just bizarre knowing this man was wearing two wigs.

Reasons for celebration in the British comedy industry

Yesterday and today have been days of me hearing about travel but not actually going anywhere myself except travelling for tea in Soho via a train in which the stranger opposite me kept farting… and driving from Greenwich to Borehamwood and finding the M25 turn-off I needed was closed.

This is neither glamorous nor very interesting.

But I had tea yesterday with someone who shall be nameless who was celebrating the fact that football manager Harry Redknapp, currently on trial for tax evasion, had opened a bank account in Monaco in the name of his dog.

“It’s comedy gold,” this nameless person enthused. “Writers and comedians all over the country must be celebrating. They say it’s all Rover? It is now.”

The reason this person cannot be named is that he told me a relation of his is an alcoholic who lives in Finland.

“Why does he live in Finland?” I asked.

“Because he is an alcoholic,” came the reply. “So, in Finland, he seems perfectly normal or even sober.”

This rings true. As I have previously blogged, I do not think I have ever met a sober Finn. Very nice people. But mostly drunk most of the time.

You cannot beat a good xenophobic generalisation, I find.

Take the cliché of the drunken Englishman abroad…

From Australia yesterday, I got two e-mails from English comedian Bob Slayer, a would-be Foreign Correspondent for this very So It Goes blog which you are reading.

“I did warn you that the combination of alcohol and an iPad could make some of my reports incomprehensible. I am currently full of drink in a Burger King (they call them Hungry Jack’s out here) where they have free interweb. I will get a bus to the airport and fly to Perth. Where it is hot. I have no more energy to type anything of note. Goodbye Melbourne, you beautiful backward en-trend land of ladies in summery dresses and cowboy boots – I will miss you.”

“I have arrived in Perth and one wheel has fallen off my suitcase (I had already lost a handle in Melbourne). This is somewhat impeding my progress.”

Bob Slayer has always told me that his decision to enter the world of comedy as a stand-up (after ten years behind-the-scenes in the music business) was made after reading godfather-of-British-alternative-comedy Malcolm Hardee’s autobiography I Stole Freddie Mercury’s Birthday Cake.

I have always had a suspicion that Bob mis-read Malcolm’s character in the book and got the idea that he was a very loud, constantly-drunk, OTT extrovert anarchist. In fact, like many great characters, Malcolm was a rather shy, occasionally drunk, occasionally OTT introverted extrovert with anarchic tendencies.

Now I fear Bob may be modelling himself on Hunter S. Thompson’s book Fear and Loathing in Las Vegas. This can only lead to drug-fuelled paranoia, guns and a surprisingly bad film by Johnny Depp and Terry Gilliam.

However, it might well also result in some good blogs. So I shall, in a subtle spirit of amoral comradeship, encourage Bob on his downward spiral of self-destructive excess.