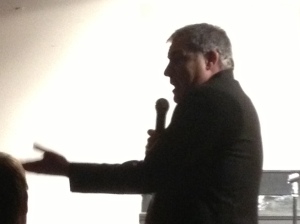 Lewis Schaffer on stage this week, before losing his trousers

When is your first Leicester Square show?

He then texted that he was in a well-known seaside town to play a gig. I will call it Boringtown. I texted back: Condolences. He texted back: Been here before. Seems nice.

Later last night, I was travelling in my car with my eternally-un-named friend (hereinafter referred-to as my EUF). I got another text from Lewis and this exchange ensued:

– I wrote that last text before my bag and useful black coat were stolen during the show. So now don’t have a good impression of Boringtown.

– In car. John is driving. EUF here. John says “Email me more about theft.” He hasn’t got a blog for tomorrow. It’s all Him Him Him isn’t it? – EUF says v. sorry to hear about coat. It’s cold. And bag. Hope no money was in it this time.

– I don’t want him to blog about that. I’m always losing things. Or having them taken from me. There’s a few Yiddish words for me. I’m the guy who spills the soup on you and I’m the one who gets the soup spilled on him. I had a feeling it wasn’t safe to leave it there.

It’s the jokes that I’ll miss. The paper bits with the funny things I said that I left in the bag. Who’s going to use them? I mean, if they can get laughs out of my joke scratchings then they’re funnier than I am.

– Schmeil or schmozzel. I’ll have to look it up in Leo Rosten’s Joy of Yiddish. One of those words or both. I’m both. I wish I only spilled. My show at the Art Centre was good under difficult circumstances – there was an audience there (joke).

– John says your jokes are so specific to you that no-one else can tell them. He laughed out loud and said half your act is you saying the words ‘Lewis Schaffer’ – that is difficult to steal.

– It’s not that the jokes are good or that I would have used them. It is now I’ll imagine those lost jokes that I’ve forgotten are the funniest jokes I’ve thought up.

– I have jokes now. I don’t tell them in the right order or when I should, but I have jokes.

– Now I have a bad view of Boringtown. Please don’t mention the town.

– John says you told him not to blog these texts.

– I lost my clothes. Luckily they didn’t think much of my leather jacket or I’d be going home dressed like a drunk stockbroker after a night out boozing.

– Are you still dressed in your stage gear? John asks have they taken your trousers? If so, comedy gold. EUF says are you on your journey home?

– They took my beloved Kenneth Cole stretchy trousers. I’m on the train. Please don’t say the name of the town. Me bad in not taking my belongings and putting them in a pile on stage with me.

– Sorry. Would hate to lose some fav clothes like that.

– John says have we agreed he can blog these texts minus Boringtown?

– And my beloved black casual shoes by Kenneth Cole, the American clothing designer.

– John says are you naked? If so, send pic immediately.

– They left my ratty suit carrier bag. Why am I such a plonker?

– I say you aren’t. John says you are. Have you still got phone charger? We are arriving at my flat now so there will be a pause.

– Luckily I hid that behind the portable heater in the dressing room. I am a plonker. I don’t think that’s a Yiddish word.

– I’m not sure you posting my mishaps is helping me in the comedy business. I’m not sure still makes other comics happy to read of my failures. I’m not a threat to them. Yes, you can blog this, but only because I sense your desperation to keep this daily blogging going. I admire your commitment. I could only do 3 months, if that.

– Do you want an IKEA double bed settee, lightweight base with mattress? Was EUF’s sister-in-law’s. Pix to follow. We just brought it back to Greenwich. IKEA beds longer than UK ones.

– 3 thefts in 5 months? You are being targeted by rogue members of the Elders of Zion… Maybe the Middle Aged of Zion.

– First the money in Edinburgh. Then my iPhone 4S in November. Now this. I should stress that the show was amazing. No-one walked out.

– My EUF says this means none of the audience stole your things. She trained as a sleuth by watching Monk on TV.

– Don’t worry. Things will get worse. I presume tonight was part of your Free Until Famous tour of Arts Centres?

– Your Leicester Square Theatre gigs are eight Sundays in a row?

– Yes. Not announced yet. You can announce them in your blog. But they are paid dates. How can I justify it?

– The audience will justify it by arriving. When are you back in South London?

– At your age, you cannot change. My EUF is starving. We will come round to your place.

– Okay. Hurry. Am fading fast. No. Don’t come. My door keys were in coat. Feeling flu-ish. Have to wake early to take son to football. His birthday. Sorry John. Ask for EUF’s forgiveness.

The printed book is dead… and libraries… and newspapers… but literacy lives on my iPad!

I was in the Apple Store in Regent Street last week and bumped into the multi-talented transsexual comic Shelley Cooper, who has almost finished writing her autobiography – now THAT should be a cracking read. She is thinking of publishing it online via a print-on-demand site.

I am also thinking about re-publishing the late comedian Malcolm Hardee‘s autobiography I Stole Freddie Mercury’s Birthday Cake as an online print-on-demand book. The costs are so low as to be negligible and the percentages to the writer are much higher – on a traditionally printed paperback book the author usually only gets 7.5% of the cover price. People can buy a print-on-demand book as a well-produced traditional paperback or download it from iTunes or Amazon.

Traditional paper books and physical libraries in towns and cities will soon be dead. A book is not bought because it is an object, it is bought an experience or for information. Content is king. The printed word is not dying – it is thriving on Facebook, Twitter, Wikipedia, mobile phone texting, everywhere. But the printed book will die.

The husband of a friend of mine is the straightest person I know. For many years, he never watched ITV – only BBC TV -because ITV was not respectable, merely a young whippersnapper upstart TV station. Yet he is now thinking of investing in an iPad or the duller and much more limited Kindle because, that way, he could take a whole library of books with him on holiday and read anything he likes when he gets there.

Ultimately, Project Gutenberg and its ilk will put almost all out-of-copyright fiction online; and Wikipedia and Google and the web in general give ultimately unlimited access to known facts. Yes, there are old books, newspapers and magazines with content which cannot be accessed online, but only because they have not yet been digitised.

Online publishers have no reason to ever declare any new ‘book’ out-of-print because the online file can remain in cyberspace forever at no extra production cost. The traditional paper book is dead and so are traditional physical libraries.

A library is just a building to keep books in. Unless they re-invent themselves as leisure centres for the printed word and computer gaming, they will soon be dead too.

What is worrying the printed media industry more immediately, of course, is what is happening and what will happen to newspapers, whose printed, paid-for editions are sliding down a seemingly bottomless pit in circulation terms.

Newspapers were always printing yesterday’s news but there used to be no alternative.

But why should I buy a print newspaper carrying out-of-date news when I can watch live street demonstrations in Cairo or around the Middle East on 24-hour live TV news channels? Why should I buy a UK newspaper when I can read other UK news sources free online and get access to Australian, Chinese, Russian and US print sources free online? AND watch Al Jazeera, BBC TV News, Sky News, Press TV from Tehran or, god forbid, the terminally dull Russia Today channel direct from Moscow?

On my iPad, I have apps giving me access to the Huffington Post, the New York Times, USA Today, the Straits Times and the Moscow Times. I can access a wider variety of sources worldwide via my Fluent News, Pulse News and Stuff apps. I get daily news update e-mails from The Scotsman and from China Daily.

Why should  buy a newspaper except for a free DVD?

On the other hand, Rupert Murdoch’s launch less than a couple of weeks ago of his iPad-only newspaper The Daily is interesting, though it is only available le in the US at the moment. If, as rumours say, he really does price a future full UK daily electronic newspaper automatically delivered to you every morning at a cost of only 79p per week…

Well, even I might be tempted… but it’s still going go be news I can get elsewhere for free.