Chris Lincé was delayed by a bird in Soho

I first met Chris Lincé years ago when I wandered along with comedian Charlie Chuck to some project they were both involved in.

I met him again last week at Soho Theatre in London.

Chris was a few minutes late because a bird shat on his head when he was coming out of Chinatown.

He now directs music videos, live shows, script edits, does lots. In Hollywood, they would call him a hyphenate.

“How would you describe yourself?” I asked. “A writer-director?”

“No,” he replied. “I’m a director who likes to get involved in the writing as early as possible, whether I’m writing it myself or – as is more often the case – working with a writer.”

He story-edited a British feature film which should be coming out next year – a superhero comedy called SuperBob, starring Catherine Tate, Brett Goldstein and Laura Haddock.

But, at the moment, he is concentrating on a crowdfunding campaign for The Exorcism of Danny Fontaine starring Danny Fontaine of rock band The Horns of Fury. There is a video for their song The Butcher (directed by Chris) on YouTube.

“The Horns of Fury had been going about eight years,” said Chris, “but they’ve recently disbanded. I did two music videos for Danny when the band was still together and now we’re working on this short 11-minute horror musical and there are plans further down the line to do longer and more extravagant things.”

Funding ends, appropriately, on Hallowe’en with filming due to start at the end of the year. The appeal is not just on Indiegogo but also on YouTube.

“It’s festivals and then internet,” said Chris. “There are probably more horror festivals than there are any other type of film festival. It’s a calling card and proof of concept showing you can have a horror musical sung through that is not what you think of when you think of musicals.”

“Sung through?” I asked.

“There are songs and no spoken dialogue. All the dialogue is sung.”

There must have been some, but neither of us could think of any other movie written originally for the screen (ignoring adaptations of stage musicals) which is wholly sung through.

“Not especially,” explained Chris, “other than the fact I’ll probably put some jokes in because I like jokes. It’s a proper 1970s-vibe rock opera – Phantom of the Paradise, Rocky Horror Show, that kind of feel.”

The upcoming musical – colourful not camp

“Not so much camp as vibrant,” said Chris. “The thing I’ve noticed in horror over the last ten years is that it’s gone greyer and greyer and greyer. There are a lot of dingy corridors and hand-held cameras. But I think that trend is changing. One of the trends at Frightfest in London this year was that colourful horror is starting to come back: a lot of highly-saturated lighting palates. There’s slightly more fun than there used to be. I think a lot of 1980s influences are starting to creep in.”

“There’s still maybe one a year,” said Chris. “Immediately after The Exorcist came out in 1973, some of the knock-offs were extraordinary. There was a blaxploitation rip-off called Abby about a woman who was obsessed by a sex demon. The way her possession manifested itself was she left her husband and hung around in bars picking up guys… And then there’s an exorcism.”

“Her,” said Chris. “Women were not allowed to do that. Did you see The Manitou? It was a 1978 Tony Curtis film about a possessed tumour which I think I’m right in saying ends with them defeating the demon by throwing typewriters at it. They just chuck typewriters at it until it’s defeated. 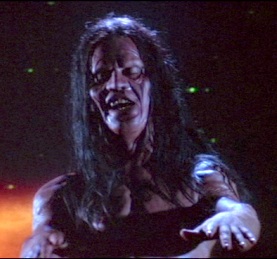 The Manitou – killed by scriptwriters’ tools of the trade

“Films are scheduled and planned and written and everybody learns their stuff. But apparently at no point in the process did anyone say: Guys – Are we really ending this film with the mass typewriter throwing?”

“Maybe the scriptwriters were exorcising their own demons,” I suggested.

“What I particularly do like about horror,” said Chris, “is that it appeals to both extremes of human experience – base, gut-level, animalistic, instinctual fears… but you can also have intellectual conversations about morality and how do you behave in extreme situations. When you get both of those playing alongside each other, it doesn’t get any richer than that.”

“Surely,” I said, “science fiction films are the ones that often examine moral and intellectual subjects?”

“Yes,” said Chris, “but there’s something more immediate about horror. Sometimes science fiction can be a little bit detached, a little bit cold. And the stakes in science fiction tend to be lower. In horror, you’re normally running away from a problem or tied to a problem or the problem’s being cut off you while you worry about it. Horror can tap into a fear that you can’t intellectualise your way out of.

“He would find something which most people had done and then take it to an extreme – which did result in killers finding very peculiar ways of killing people. But scalding someone to death makes it relatable in a way that being shot or vaporised does not. If I see someone being vaporised in a science fiction film… I have never been vaporised… I assume it is bad, but I don’t know what it feels like. There’s nothing that affects me on a gut level.

“Whereas a paper cut I can understand. If you imagine a piece of paper slipped under your fingernail, pushing its way into your finger, you can imagine feeling that far more than someone being vaporised.”

“There is research,” I said, “that, when people watch violence on screen, they watch not the action but the re-action. If someone is punched in the stomach, they don’t watch the fist hit the stomach; they watch the reaction on the face of the person being hit.”

“Probably the most reaction you can get,” said Chris, “is going for the eye or mouth. Have you seen the Dario Argento film Opera?

“There is a scene where the killer wants a woman to watch the killing he is about to do. So he Sellotapes needles to her eyes so that, if she closes her eyes, they will stick in her. A close-up of an eye with needles attached to it is far more horrifying than the actual act of violence which Argento then shows – somebody being cut in the neck – because you are just that much closer to something you can relate to.

“Last night, we were having long discussions into the night about the best way of killing somebody in our film. Long, dry discussions along the lines of Yeah, but if we cut him across the belly, it’s bloody but it’s not as interesting as cutting the face. Conversations about maximum impact and maximum reaction.”

“I guess,” I said, “in cinema, punching someone on the nose feels more violent that stabbing someone in the stomach with a knife because it has more of a visible effect. Attacks on the face are more frightening.”

“It’s where we view everything from,” said Chris.

“I suppose,” I said, “that horror is the most constantly violent genre, along with westerns.”

“Westerns,” said Chris, “are one of the few genres I don’t get on with and I don’t really know why. It might be the hats.”

At this point, as Chris and I sat in the Soho Theatre Bar, we saw two policemen ride slowly up Dean Street on horses.

“There is something I don’t know about police on horseback,” said Chris. “If you are a policeman on horseback and you see some criminal activity – like you see someone running down the street with a stolen television – are you allowed to gallop after them?” 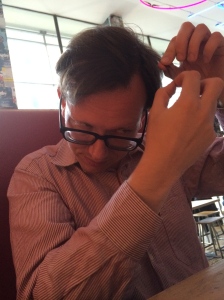 Chris had a hairy time when we met in Soho…

“I just want to see that,” said Chris. “It seems dangerous.”

“Though,” I said, “even if they gallop, it would be easy enough for a man on foot to escape from a pursuing horse in the West End.”

“It just seems futile having horses in Soho,” said Chris.

“I had better take a photo of you before you go,” I said.

“I really do have dry bird shit in my hair,” said Chris.