Kunt and the Gang with Jimmy Savile, Rolf Harris and the Yorkshire Ripper

I try to make these blogs fairly immediate. But, in this case, I have failed miserably.

After trying and failing two or three times to meet up online during the early days of the coronavirus lockdown, Kunt (of Kunt and The Gang – is there any other?) and I eventually chatted via FaceTime on 14th May – that’s almost a month ago now.

JOHN: What have you got on the wall behind you?

KUNT: It’s my memorabilia… Look… Here… I got this on my final tour: it’s a signed picture of Rolf Harris, some saucy seaside postcards and… 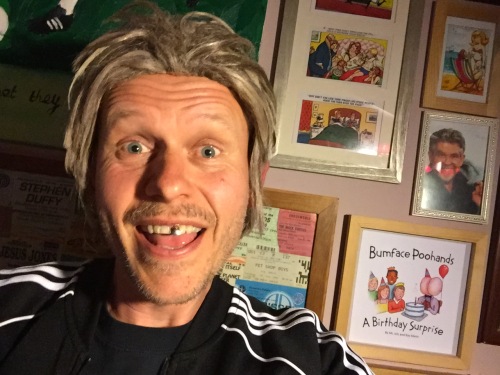 Kunt in front of his wall of memorabilia… Saucy postcards, a famous family TV star and Kunt’s book

JOHN: Who’s in that picture on your Facebook page? The Yorkshire Ripper and Jimmy Savile and…

Kunt performs in front of the Yorkshire Ripper, Jimmy Savile and Frank Bruno… in Hitchin…

KUNT: On my final tour, at a gig in Hitchin, they said: “Have you got an image you want projected behind you?” and I said, “No. not really, but it’s a shame not to have something projected,” and so we used that one. It’s one of my favourite photos. It’s Jimmy Savile introducing Frank Bruno to the Yorkshire Ripper.

JOHN: He’s a nice man is Frank. Did he know it was the Yorkshire Ripper?

KUNT:  No. he was completely hoodwinked into it. So there’s Frank shaking hands with The Ripper and Jimmy Savile is in the background just looking all pleased with himself. The thing I like most about that photo is that it was obviously years before all the stuff came out about Savile and he’s there in I think Broadmoor with a great big cigar and, behind him, there’s a NO SMOKING sign. That says all you need to know about Jimmy Savile in that one photo, smoking, introducing the Yorkshire Ripper to Frank Bruno.

I also love the fact The Ripper is in a late-1980s/early-1990s shell suit. Savile must have just taken it in on that visit and said: “Here, Pete, just slip this on. This’ll suit ya.” 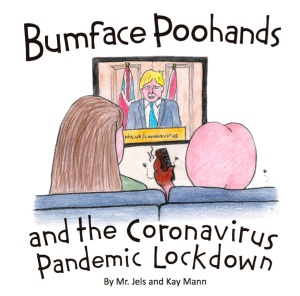 JOHN: It’s been so long getting to chat, I’ve forgotten what you are plugging. Is it your children’s book Bumface Poohands and the Coronavirus Pandemic Lockdown?

KUNT: No, I’m not actually plugging anything. That was weeks ago I done that.

JOHN: Look, I’m an old man; I’m sick; I’m not going to last much longer. There’s COVID-19 around. Help me out here. Make up something surreal. Are you plugging your nightly online show Kunt’s Korona Klub?

KUNT: No! I’m not plugging it because I don’t want other people tuning in to it. I like the people who are tuning into it already, because they’ve been with it for kinda 45 nights and, if you tune in now, you just won’t understand what’s going on because it’s sort of developed its own lingo.

KUNT: A couple of ‘em are alright but the majority of ‘em I wouldn’t give the time of day.

KUNT: It’s to take the edge off doing FaceTime with you. I don’t really like doing FaceTime. I don’t wanna plug anything, John. I don’t like plugging things; it’s a bit shameless, ain’t it?

JOHN: Shameless? Have you listened to any of your songs??

KUNT: Well, they’ve got their own integrity. But it’s a different type of integrity.

JOHN: What sort of integrity would this be?

KUNT: One that I sort of tell meself is alright.

KUNT: It’s morphed over the years.

JOHN: On whom did you base this moral code? Heinrich Himmler?

KUNT: Are you comparing me to Heinrich Himmler?

JOHN: No. He was an underling. You’re more Hitler.

KUNT: Well, I have got a moustache, so there are some similarities. Though not a very good one. It has a bit of mascara on it.

JOHN: Why have you got mascara on your moustache?

JOHN: So the ego has landed? You have done pretty much everything. What is there left? You’ve done books, albums, stage shows, become a cult Kunt…

KUNT: I think I’m gonna fake my own death from COVID-19 to make it current and then I’m going to surruptitiously put the thousands of CDs I’ve got stored round me mum’s house on eBay, but in dribs and drabs. It’s the perfect time to hold a funeral and get away with it.

JOHN: Does it have to be a fake death? It would be better if it were real. I could get people to kill you. As a favour, obviously – mate’s rates.

“This is my actual hair. There’s rumours about it being a wig.”

KUNT: John, this is my actual hair.

KUNT: There’s a lot of rumours about it being a wig.

JOHN: Don’t mention hair to me. Why did you write a children’s book anyway?

KUNT: I’m not plugging it.

JOHN: So it started because…?

KUNT: I went round my mate’s house one day and, on his fridge, he had this picture pinned up of this character with an arse for his face and these poo hands. I asked: “What the fuck is that?” And he said, very matter-of-factly: “That’s Bumface Poohands.”

He said: “I just do these little drawings and leave ‘em in me daughter’s lunchbox to make her laugh.”

JOHN: Has he ever read any books on parenting?

KUNT: No. My mate told me: “He’s a down-at-heel character who ends up in all the situations.” So I said to him: “Have you ever thought of making it into a children’s book?” and I… well… Well, it was just an excuse to meet up every few weeks. We’ve got about a dozen books written now and half a dozen illustrated and we’ve put two out – Bumface Poohands: A Birthday Surprise and Bumface Poohands: A Snowy Day and now we’ve just put this Coronavirus one online as a free e-book.

JOHN: How is Bumface going?

KUNT: It’s going alright. Bumface Poohands and the Coronavirus Pandemic Lockdown seems to have landed quite well. I’m quite happy with it. It sort of tells a story of what we’re kinda stuck in at the moment… in a fairly jocular way, compared to how bleak things actually are – and it seems to kinda cross over with adults and kids.

But Bumface Poohands is like everything I do. I always think Oh! This’ll be the thing that crosses over. But it never is. The ideas I have always have a very finite amount of people who are gonna like them. I thought at one point that Bumface Poohands would be my retirement plan, but now I’m looking at alternative arrangements.

JOHN: If you have 12 new ones written and 6 illustrated, it may yet still happen. JK Rowling approached every sensible publisher in London with Harry Potter and they all turned her down – quite rightly. It’s a ridiculous idea: a boy wizard in this day and age! No-one is going to buy that. Totally uncommercial. But then she got a publisher and now everyone is drowning in dosh.

JOHN: Well, you’re a great lyricist; you write great tunes; if you drop a few of the ‘cunts’ and ‘fucks’… You are an Essex boy made good… or bad. Rags to riches story or whatever…

KUNT: But I came from a working class, aspirational middle class family. There’s no story there. It’s not rags to riches.

KUNT: It’s been strange round here. My mate’s doctor died and the landlady at one of the local pubs. But, other than that, it feels like it’s all kinda happening in London and the cities, not Essex.

JOHN: I think I have enough for a blog there.

JOHN: I think so. I will craft it into a thing of fascinating beauty and riotous fun.

KUNT: I don’t think so, John. I read the last one you did.

JOHN: Have you ever had anyone write a brilliant, incisive piece on Kunt and the Gang?

KUNT: No. Anyway, a brilliant, incisive piece wouldn’t really be right for Kunt & the Gang.

JOHN: Then I’m the ideal person for you.

KUNT: Just make it sound better than it actually is, John, and then it’s maybe worth this awkward FaceTime.

JOHN: Do you still feel awkward?

KUNT: You haven’t put me totally at my ease… Heinrich Himmler?

Exactly one week later, I was taken into hospital for seven days with low kidney function and high calcium problems. I don’t blame Kunt. Not totally. But I did think it might be a good excuse for taking so long to post this blog.

He finished his nightly Kunt’s Korona Klub shows on YouTube with Episode 58 on 31st May.

Last night, 8th June, I got an email from Kunt. It read:

“How you keeping John, not chasing you up, just seeing how you are?!”

I took this as a veiled threat – he lives in Essex – and I had run out of excuses for my laziness in transcribing our chat. I did not think the fact I currently have constipation would be justification enough.

On a cheerier note, he added: “I’m going to start a new monthly YouTube show called The New Normal in a few weeks time…

“In one section, Down Meme-ory Lane, I turn investigative journalist and hunt down people whose image became a viral internet phenomenon…

“In another, I’ll Be The Judge of That, I adjudicate over petty Facebook disputes and make a ruling as to who has been the biggest cunt…

“And there is going to be a continuing serial drama following the inhabitants of ‘Yewtree Close’… a bit like Neighbours for sex offenders.”

The man is unstoppable.