Douglas Adams interview. Part 2: From Hitch-Hiker to Doctor Who and back

Publicity photo of Douglas Adams circa 1980 (Photograph by Mark Gerson)

In yesterday’s blog, Douglas Adams talked about his life before success.

Today, the interview continues. I talked to him for Marvel Comics in 1980.

JOHN: …So John Lloyd (now producer of Not The Nine O’Clock News) helped you write parts of episodes 5 and 6 of the original BBC Radio 4 series of Hitch-Hiker’s Guide to the Galaxy…

DOUGLAS: Yes. John Lloyd and I had known each other for years and, at one stage, actually shared a flat together and kept on half-producing ideas which never really came to fruition… Actually, there was one thing! About two or three years ago, he and I wrote a couple of cartoons for a Dutch television company. They were making a series called Doctor Snuggles. (LAUGHS) It was being made internationally, so the scripts were being written by British writers and it was being performed in English with Peter Ustinov doing the voices. I gather one of the episodes we wrote actually won an award last year. I think it is eventually coming to British television and it’ll be rather curious to see it.

JOHN: What was it about?

DOUGLAS: Well, if you can imagine a cross between Professor Branestawm and Doctor Dolittle… It was quite fun working on that, actually. The writers’ fees were rip-off time. But it was immense fun – there were all sorts of things we could do in  animation.

JOHN: It sounds a busy time.

DOUGLAS: The way things went, yes. I was writing Hitch-Hiker (the first radio series) for a lot of 1977 and we were making it at the end of 1977/beginning of 1978 and it went out starting in March 1978. During that time, I was living at home with my parents and the fee for writing the first radio series was miserable – something like £1,000 for the six episodes – which is not a lot for something over six months’ work. So I was thinking I’m such a slow writer and it looked as though Hitch-Hiker might do OK; but there was no precedent for a radio series meaning very much in the long run.

So I was then offered a job as a BBC Radio producer  and I thought I ought to do it for the money. During the six months, Hitch-Hiker began to be a success and I was producing Week Ending, which was quite fun. In fact, the first job I was given was compiling a programme about practical jokes. I had to go out and interview Max Bygraves and Des O’Connor. I thought: What am I doing here? But I knew people had put themselves out to help me get this job and it was a staff job, not a contract job, so to leave after six months would be ridiculous.

JOHN: Then you were offered the job as script editor on Doctor Who.

DOUGLAS: Yes, which caused an immense rumpus. And I did Doctor Who for fifteen months and it was a terrible, terrible time. It was great to begin with, while I felt I was actually managing to juggle all the balls at the same time. Because, at the end of 1978, I was writing the first Hitch-Hiker book, trying to get down to writing the second radio series, which kept getting put off and put off, and I was script editing Doctor Who and having to produce lots and lots of storylines for writers.

And I was also doing one fairly major last job as a radio producer — a pantomime show for Christmas called Black Cinderella Two Goes East. Everyone involved in it – the writers and all the cast – were ex-Cambridge Footlights. So we had Rob Buckman playing Prince Charming and Peter Cook was his brother Prince Disgusting and John Cleese played the fairy godperson. John Pardoe MP played the Fairytale Liberal Prime Minister – on the grounds that you only get Liberal Prime Ministers in fairy tales. The Goodies played the Ugly Sisters, Jo Kendall played the wicked stepmother and Richard Murdoch was in it too. It was terrific, but the BBC gave it no publicity whatsoever. 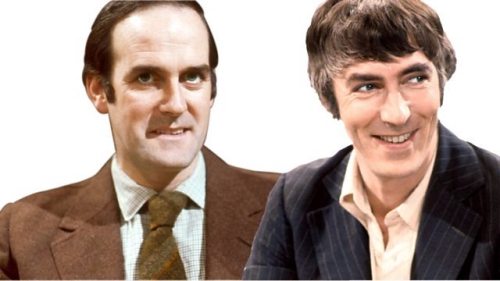 JOHN: And after that you were able to devote more time to script editing. What exactly does a script editor on Doctor Who do?

DOUGLAS: Everything. Oh god! I was very naive when I wrote Pirate Planet because I’d always assumed that, basically, writing the script is the writer’s job and coming up with all the ideas is the writer’s job. So I worked very, very hard on The Pirate Planet scripts. Then, when I came to be script editor, I discovered other writers assumed that getting the storyline together was the script editor’s job. So, all that year, I was continually working out storylines with another writer, helping yet another writer with scripts, doing substantial re-writes on other scripts and putting yet other scripts into production – all simultaneously.

When you’re doing 26 half-hours in a year, that’s a helluva lot. And, at the same time, writing the first Hitch-Hiker book. And also trying to do the second radio series. It was an absolute nightmare year. For four months when I was actually in control it was terrific – when you feel you’re actually in control of all that and actually getting it done. Having all these different storylines in your mind simultaneously. A writer suddenly phones you up at midnight and you’ve got to know exactly what he’s talking about and exactly what his problems are and sort them all out. You actually get very high on that, as long as you cope. But, as soon as you stop actually coping (LAUGHS), it becomes a nightmare.

JOHN: You finished working on Doctor Who in January 1980 and by then Hitch-Hiker had really taken off on radio and become a cult. It had even been on stage.

DOUGLAS: Well, it’s been on stage three times and the one which got all the notice was the one that didn’t work. Ken Campbell did two. His first one at the I.C.A. (Institute of Contemporary Arts, London) went very, very well. The audience was put on a hovercraft and the action all took place round the edge of the theatre. I didn’t believe it till it actually happened. We were turning away 1,500 people a night from that show, but only getting 80 people in, because that was all you could fit on the hovercraft.

Then Theatr Clwyd did Hitch-Hiker with a touring company in Wales. They would sometimes do two episodes in an evening and, at other times, the whole lot – which was a long evening. That went very well. I didn’t know anything about Theatr Clwyd: I just thought it was going to be a load of Welshmen going round saying Hello, boyoh! But it wasn’t at all; it was a very good production. So they were then offered The Old Vic but, by then. I’d already offered the stage rights to Ken Campbell, who wanted to do another production.

He decided to go for broke and put it on at The Rainbow (in Finsbury Park, London). I should have known better, but I had so many problems to contend with at that time I wasn’t really thinking awfully clearly. The thing at The Rainbow was a fiasco.

DOUGLAS: The first two productions had worked well largely because they’d been performed to relatively intimate audiences. The I.C.A. was only 80 and I suppose the largest Theatr Clwyd audience was about 400. But you put it in something the size of The Rainbow – a 3,000-seater theatre – and, because Hitch-Hiker tends to be rather slow-moving and what is important is all the detail along the way… You put it in something that size and the first thing that goes straight out the window is all the detail.

So you then fill it up with earthquake effects and lasers and things. That further swamps the detail and so everything was constantly being pushed in exactly the wrong direction and all the poor actors were stuck on the stage desperately trying to get noticed by the audience across this vast distance. If you’d put the numbers we were getting at The Rainbow into a West End theatre, they would have been terrific audiences – 700 a night or whatever. But, in a 3,000-seat theatre, 700 is not a lot. particularly when you (the producers) are paying for 3,000 seats. So the whole thing was a total financial disaster.

JOHN: There was also talk of a film.

DOUGLAS: Well, I’ve been into that twice…