Tag Archives: THere’s No Room For Jugglers in My Circus

The Krays’ associate Micky Fawcett has advice on how to stay healthy & fit.

I’ve mentioned before in this blog, author and former criminal Jason Cook’s plans to film his three semi-autobiographical novels. The first in the planned trilogy – The Devil’s Dandruff – is based on his first book There’s No Room For Jugglers in My Circus.

The selling line of the movie is:

ONE LINE IS NEVER ENOUGH
…A THOUSAND IS TOO MANY

I had a chat this week with former Kray Twins associate Micky Fawcett. He has written arguably the definitive insight on life with the Kray Twins – Krayzy Days – but it involves much, much more than the Krays.

“So Jason sent an email asking if I would play a cameo role in his film,” he told me.

“Yeah. He sent me a couple of options – One was I could have a non-speaking part. The other was him and me sitting playing chess and I look up and see Mr Adams…”

“That’s not a good idea,” I suggested.

“Mr Adams might be the name of the screw,” said Micky. “I dunno. I look up and say: Looks like the game’s up, Jason.” 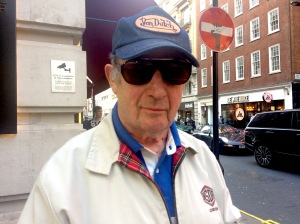 Micky Fawcett outside the May Fair Hotel, London, last week

“Well, the first thing you gotta do,” said Micky, “is make sure they’ve got the money. Otherwise you’re banging your head on the wall.”

“So how did you persuade them of the error of their ways within the letter of the law?” I asked.

“People will have told you their theories,” I suggested.

“Someone once told me,” said Micky, “that you can soften them up and your solicitor points out to them that they should get a solicitor. Then that other person’s solicitor gives it to your solicitor who passes it on to you. You don’t take the money direct. You would not want to be guilty of demanding money with menaces.”

“But, if you did something naughty and, coincidentally, money was transferred…”

“Well,” said Micky, “it wouldn’t be you who did anything naughty either, would it?”

Micky is, to be honest, knocking on a bit.

“But you must still be very healthy,” I said to him, “because of all the exercise you did in your boxing days and before.”

“I used to do a lot,” Micky told me. “My exercising is very restricted now but, if I don’t do it, I start fretting. Valentine’s Park in Ilford has got all the equipment in it. I’m a big fan of walking as well.”

“I am,” said Micky, “pleased with the fact I was disqualified from driving a few times. I used to just walk everywhere. I have had motor cars and I also like driving but now I don’t drive if I can help it.”

“When I was a student,” I said, “I used to live in a bedsit in Hampstead and sometimes walk down to the college in Regent Street – it was lovely – about 45 minutes walk. Swiss Cottage, Primrose Hill, Regents Park. A nice walk. Now I’m trying to slim. But I put on 5 lbs last week.”

“How are film plans going for your own Krayzy Days?” I asked.

My inability to read books, the dyslexic ex-gangster and the recent arrest of one of the Cheeky Girls

I have written books since then, but I am physically unable to read them.

Last night, at Elstree Studios, I had a chat with author and would-be film producer Jason Cook, a very interesting man who has written three novels despite being severely dyslexic.

I am not dyslexic.

Jason Cook is an ex-criminal… some might say he’s an ex-gangster, but defining the word ‘gangster’ is a matter of semantics. By anyone’s definition, though, he is a very amiable, charismatic, creative dynamo of a man.

He was smoking and selling hash from his bedroom at the age of 12. By the time he was 16, he had moved on to ecstasy and had become involved with – by any definition – local gangsters. He took steroids, worked out at the local gym to build himself up and also had a tendency to carry knives AND guns; he was always thorough. By the time he was 17, he was helping the same local gangsters collect drug-related debts.

He was also addicted to cocaine.

Eventually, he was arrested and given a seven and a half year prison sentence, though he only served two years and nine months of it. While he was inside, he joined the education programme, volunteered for the drug-free wing (interesting that the prison authorities only labelled one wing as being drug-free) and was given support to kick his drug habit.

As part of this rehabilitation programme, he was encouraged to start writing about his experiences. The result is three novels – There’s No Room for Jugglers in My Circus, The Gangster’s Runner and the soon-to-be published A Nice Little Earner. This, remember, is from a man who is severely dyslexic.

All three novels have now been scripted as movies and ballpark budgeted. A few months ago, I advised Jason against joining the glut of cheap Brit movies and go for the big-time, big-screen legit movie area. Now he has offices at Elstree Studios. And now, I suspect, the fun and painful games will really start…

Well, in a sense the fun has already started.

At the beginning of last month, shortly after meeting Jason to discuss a role in the first of his planned trilogy of films, ‘Cheeky Girl’ Gabriela Irimia was arrested by police in Wilmslow, Cheshire, for shoplifting £40 worth of groceries from a local Sainsbury store. Her formidable mother Margareta told the Daily Mail that Gabriela “was getting into character” for her forthcoming role in the film version of Jason’s first book.

The Cheeky Girls are still in line to appear on-screen.

Jason is still trying to get full finance for his three movies and he is so energetic anything is possible.

As for my inability to read any book since the morning of 9th March 1991, more about that tomorrow…

A hard man is good to find

I was in the bar at Elstree Film Studios last week, which can feel a little like swimming in the recently dangerous waters off Sharm-el-Sheikh, surrounded by sharks circling for prey – though, in the current economic climate, the dead eyes are more desperate that deadly (unless, one presumes, you go into business with them).

He is one of those interesting people who are a just joy to meet, although I suspect living his life was considerably less enjoyable than sitting back and hearing about it. He is a dyslexic ex-con, who was smoking and selling hash from his bedroom when he was 12. By the time he was 16, he had moved on to ecstasy and became involved with local gangsters. He carried knives and guns, took steroids and worked out at the gym to build himself up. By 17, he was helping alleged gangsters collect debts – related to money-lending, drugs, anything.

Eventually, by now addicted to cocaine, Jason was given a seven and a half year prison sentence, of which he served two years, nine months. During this stretch in one of Her Majesty’s finer residential establishments, he joined the education programme and volunteered for a ‘drug-free wing’, where he was given help and support to kick his habit.

As part of the rehabilitation programme he was encouraged to start writing about his experiences and this inspired him to write his first partly autobiographical book, There’s No Room for Jugglers in my Circus (2006). This was followed by The Gangster’s Runner (2009) and the upcoming A Nice Little Earner ( to be published in 2011).

It’s a rare thing to find an optimistic story about a hard working indefatigable person who has overcome the odds and could succeed because of sheer personal determination.

Jason’s first two novels are being used by local community ‘drug awareness’ groups; he does an impressively heavy schedule of book signings in Waterstones etc etc; and he is trying to raise finance for the first of a movie trilogy based on his books – thus the move into Elstree Studios today.

But one of the strangest things he told me is that his definitely – indeed, definitively – ‘hard man’ books are mostly bought by women. Neither he nor I understand why as, from all the above, you can tell they appear to be resolutely “lads” books about “the Chaps”. One theory Jason has is that his books are being bought by women as presents for their men; the only other possibility would seem to be that women are somehow moving from ‘chick-lit’ to tougher books.

Perhaps they, like Mae West, believe that “a hard man is good to find”.

PS If you have couple of million pounds to invest, Jason Cook is your man. That’s the author/producer not the stand-up comedian, though I’m sure that other Jason Cook wouldn’t turn it down either.