“So you have Russell Brand,” I said to Noel Faulkner yesterday.

“Yes,” he told me. “He’s going to celebrate the 25th anniversary of the Comedy Cafe by doing a gig on Wednesday 3rd June for the orphanage in Nepal.”

“This is the charity,” I said, “that you’ve always refused to let me mention in my blog in case it makes you look too amiable?”

“Yes. You can say it’s a Comedy Cafe friendly charity.”

“What is a Comedy Cafe friendly charity?” I asked.

“One that we fuckin’ support,” replied Noel. “Whatever. The show’s also got Trevor Lock, Andrew Maxwell, Jimmy James Jones and Kate Lucas.”

“What’s the orphanage called?” I asked.

The charity’s website says it provides a home for abandoned children, an education center for impoverished women and children and an outreach program for needy families.

“How long has it been running?” I asked.

“I don’t want to go into all that,” said Noel. “I like people to think I’m a bit of a cunt… Alright, the charity has been going for thirteen years. In Kathmandu, Nepal.”

“Oh bloody hell!” I said. “Is it actually in the city itself? Was it affected by the earthquakes?” 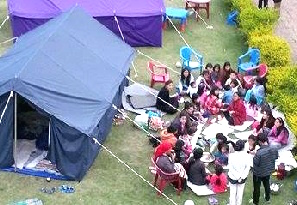 “At the moment, they’re living in tents in the front garden because the building is cracked. We are flying an engineer out from America to look at the building. He’s going out there with the founder of the charity, Beverly Bronson.”

“How many people are living in the garden?” I asked.

“Thirty one plus neighbours,” said Noel. “We’re taking care of neighbours. A lot of poor people live around it.”

“Is 31 the capacity of the orphanage?” I asked.

House with a Heart – as it was before quake – in Kathmandu

“What age are the kids?”

“From 4 to 22. The 22-year-old is just getting ready to go to college and move into outside accommodation, which we will still… We will see these people right to a career.”

“How do you choose the kids?” I asked.

”There is no way you choose… If you’ve got room and somebody dumps a baby on your doorstep… you take it in. There’s going to be a lot of abandoned kids with this crisis. People can’t feed them, so they dump them on your doorstep. We’ve only had one that was abandoned so far. Well, actually, a few of our kids were abandoned by their parents – neighbours who were very poor were looking after them.”

“How often do you go out to Nepal yourself?”

“I used to go once a year. Beverly goes twice. She lives in New York. She has a little retro antique shop in the Village. She founded the whole thing and the Comedy Cafe just stepped in with a little finance. She keeps an eye out that every kid is being taken care of, has got their needs, got their dental care. Young girls turning into women go to a doctor and are told how it all works. We have an outreach programme that trains women to sew and we pay them $20 a month and, at the end of six months, they’re qualified and then we buy them a sewing machine and then they can make a few bob.”

“How,” I asked, “did you get Russell Brand for the show?”

“I bumped into him on the street. He reminded me about the time I threw him out of the Comedy Cafe for being a cunt.”

“He was walking on the tables.”

“Have you seen him since then?”

“No, I just bumped into him this week.”

“What else is happening?”

“I’m working on my Touettte’s song I’m Not On Drugs, I’ve Got Tourette’s.”

“When will that come to fruition?”

He is not a cunt.

But don’t tell anyone.

His rap song Comfort Zone with Jimmy James Jones is on YouTube. 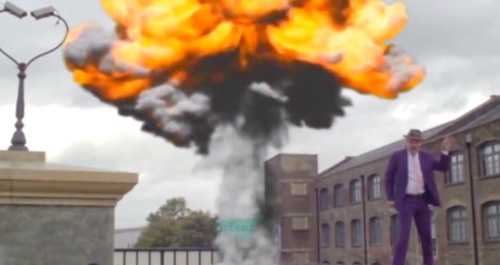 I know the human being and fish can co-exist peacefully. Yes we can. He has existing and active military plans which could be activated within 45 minutes. I did not have sexual relations with that woman.

Paedos on the telly, looking like stars
Paedos in Rome and the House of Lords
Paedos in the pockets of all the police
Hope the dirty buggers don’t have their eyes on my niece

“It’s visually fascinating,” I said. “That bit with you in the Taj Mahal and the faces on the wall. And an older man in a purple suit and a young black guy.”

“There’s something there, isn’t there?” he said.

“You should go up to the Edinburgh Fringe with it,” I said.

“I fucking hate Edinburgh,” he told me. “Standing around surrounded by multi-millionaires who pretend they don’t have any fucking money with their fucking Caribbean tans. Fuck them, the rich bastards. I’m just jealous. I wanted to launch it on your blog first,” he told me at his club yesterday. “I wanted to support you.”

In the increasingly prestigious Grouchy Club Podcast a month ago, Comedy Cafe Theatre owner Noel Faulkner said he was about to release a rap video called The Comfort Zone. And now he has.

“Why am I rapping? I just had something to say and I wanted to say it, but I had to do it in a character, otherwise it just didn’t work for me. Maybe cos I was an actor. It all started as a joke and then I got some good words out.”

“Just me pretending to be streetwise. The group… we call ourselves A and I – Artificial Intelligence… or African and Irish… Jimmy James Jones is of African descent and I’m Irish.” 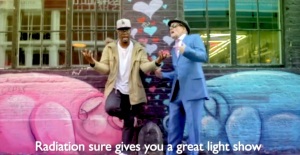 “Cos these are the things that are in my head,” Noel told me. “You gotta get your message out. I do rants on Wednesday nights at the Comedy Cafe, except I take out the comedy. I just tell the audience how fucked the system is and talk about fractional-reserve banking and shit like that and they just stare at me and then I tell them they’re a bunch of cunts because they didn’t pay to get in anyway, because Wednesday night is open mic night. So they just stare at me in disgust and think: Oh well, it’s warmer here than in our apartment, so we’ll stay.”

“How,” I asked, “did you persuade Jimmy James Jones he should play second fiddle to an older man in a purple suit?”

“Well,” replied Noel, “I manage him. He is going to be one of the hottest comics in Britain: just watch this space.”

“I had a very good cameraman and film  maker – Max McCabe – so we directed together.”

“And there’s another song to follow,” he continued, “called I’m Not on Drugs; I’m on Tourette’s”.

I’m not on drugs. I’ve got Tourette’s
I’m a mover and a shaker. That’s as good as it gets

If you see me twitching on the dance floor
Don’t come up to me and ask me if you can score
The girls look at me and my dancing feet
They think he looks kinda crazy, but he’s kinda neat

I’m a mover and a shaker. That’s as good as it gets
I’m not on drugs. I’m on Tourette’s

“You and Jimmy James Jones look visually good together,” I said.

You can see A and I – Noel Faulkner and Jimmy James Jones – singing Comfort Zone on Vimeo.