The only recreational drugs I was interested in when I was in my late teens were LSD and heroin… LSD because of its alleged creative expansion of the mind… and heroin for the opposite reason why most people take drugs – the downside not the upside.

I remember when the government’s first anti-heroin drug ads were screened on TV – all that despair, despondency and crouching-down-in-the-corner imagery – a friend of mine said to me that the people who designed the anti-heroin campaign didn’t seem to be on the same wavelength as the people who might be attracted to take heroin. They thought the images would be vey unattractive, but she found them almost a turn-on.

Ironically, she had, in fact, taken heroin once and the up-whoosh she found completely overwhelming to such an extent that she was frightened by her own attraction to it; but she was also attracted in a self-destructive way to the downside afterwards.

When I myself would have taken acid or smack, they were not really available in the then limited circles I moved in.

By the time they were accessible, I had seen and read about the dangers – Syd Barrett of Pink Floyd had gone completely doolally on LSD and Brian Wilson of the Beach Boys had allegedly initially got psychologically hooked on acid then went doolally after someone spiked his drink.

When I was around twenty, a female friend of mine married a heroin addict.

In I guess the mid-1980s, I remember for some reason sitting in on someone else’s overnight video edit in Soho. The guy I knew directing the edit was being obsessive about every single exact cut and two in particular, getting them moved back and forth by individual frames (there are 25 frames per second on UK videotape).

The edit took about four hours, with those particular two cuts taking about two hours in the middle of it… and with him making regular trips to the toilet, usually emerging rubbing his nose. 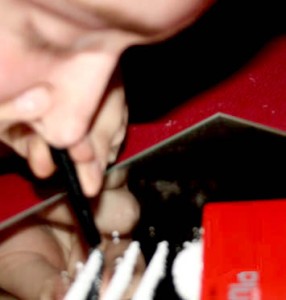 Not recommended by me (Photo free from Wikipedia)

At the end of the edit, when he was again in the toilet, the editor told me that the two edits were, at the end of the session, exactly where they had been at the very start.

Around the same time, I also had a job interview with a female company boss who – unsurprisingly but absolutely genuinely – was from South America. She sat behind her large desk and I sat facing her.

Halfway through the interview, she took out some cocaine and asked me if I wanted to join her. I said No; but she herself indulged and for the rest of the interview was occasionally face down on the desk, snorting the stuff while asking me questions or allegedly listening to my answers. Totally true.

On another occasion, I was working as an associate producer in an open plan office, sitting opposite a production secretary. When the company boss came into the office in the morning or afternoon, she would guess if he had or had not been snorting coke that morning by the speed he walked across the office floor to his desk. 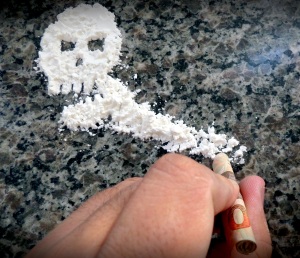 On yet another occasion, I was at the National Film Theatre where a top TV executive was giving a major presentation to the assembled throng. As it was a very right-on event, to the right of the stage a lady was doing sign language for the deaf although I don’t think there was any reason to suppose there were any deaf people present.

The executive, by repute, was no stranger to coke and was speaking so fast that the sign language lady could not keep up with him and had to stop him occasionally to catch up.

There was some light laughter from the audience, though whether it was laughing with the sign lady or at the executive was unclear.

Difficult to be certain as there was a chance that maybe half the audience was also out of their heads.

Casual cocaine-snorting in the 1980s…

In the 1980s, people would stick their nose in if asked…

Someone said to me that, today, she does not know anyone in the media who takes cocaine.

I suspect she should go out and meet more people.

The owner of the company sat at one side of a desk and I sat facing her. She did not impress me because she seemed a bit uninterested in the whole process as if it were just a necessary but dull chore she had to go through. As, indeed, it was.

About a third of the way through the interview, she took out some cocaine and offered me some.

So she put some in a line on the desktop in front of her, made a tube of paper and snorted it while continuing with her explanation of what the upcoming TV programmes were about and how the company was organised.

I didn’t get the job.

I do not think she was doing the coke thing as a test for me to see my reaction.

I think it was just a perfectly normal, casual thing to do like (in those days) smoking a cigarette or sipping some tea.

We had never met before.