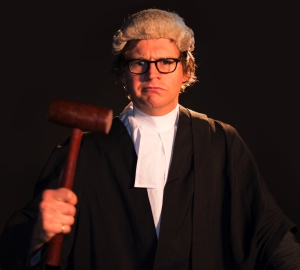 David Allison, Fringe virgin, risked getting screwed up there

Producer David Allison is staging a series of five shows called This Is Your Trial, three of which are private and only two of which are open to the public.

“I just didn’t know the ‘rules’ of doing the Fringe,” David Allison says.

I blogged about This Is Your Trial back in February.

Basically, David structures a personalised comedy show based round the idea of putting one person ‘on trial’ for a spurious offence and inviting the person’s friends, workmates and acquaintances along as prosecution/defence witnesses, jury and audience.

“This Is Your Trial,” says David, “has been described by Mark Dolan (of Channel 4’s Balls of Steel) as Judge Judy meets a comedy roast. It has taken some time to develop, with different comics and audiences and all its ups and downs.

“People tell me I should be waking up in a cold sweat and I should be panicking… I should be regretting embarking on this plan… That is how I’m told people normally prepare for going to the Edinburgh Fringe and yet I feel quietly optimistic. Am I getting it all wrong?”

He does have one big problem, though.

“One proviso when I started my Edinburgh adventure,” he says, “was my partner Nina’s demand that it wouldn’t put me (further) into debt. Otherwise, I was told, I might as well stay up there and not come back.”

I told him: “Going to the Fringe is like standing in a cold shower tearing up £20 notes” and one comedy act he spoke to told him that if he (the act) sold all his tickets for the entire run he would only lose £3,000. Only. 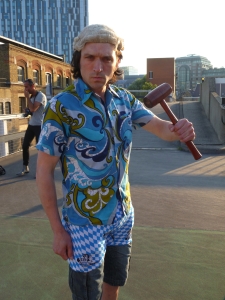 It was at this point, apparently, that David realised going to the Edinburgh Fringe and not losing his shirt (and his partner) was going to be more tricky than he thought.

But comedian now Fringe venue runner Bob Slayer offered him performance slots at the new Bob’s Bookshop venue under his inventive Pay What You Want – Heroes of Fringe banner, a spin-off from the Free Festival.

Bob told David: “Everyone will tell you to expect to lose money at the Fringe and that is sound advice based on most performers’ experience. But £2 million of tickets are sold during August, so someone somewhere is doing OK. I think it’s probably the people giving you the advice that you’ll lose money – the PR people, marketing people, big venues, agents. They are are probably the ones making all the cash. It’s not in their interest to see the Fringe model change even if that would make it a more creative and vibrant Fringe. So don’t be swayed by the general industry consensus. Find your own way and you can succeed (or fail) on your own terms.”

Spurred on by this, David says: “My first decision was to limit the time spent up there. I couldn’t get any more than a week off my (proper) work anyway, so that decision was made for me. And the nature of the shows I do requires a lot of detailed research, so a limit of five shows would help ensure the quality wouldn’t suffer.

“The unique position I had was that, although most shows might need to sell a lot of tickets per day to make a profit, my shows are personalised experiences for groups who know each other – so selling individual tickets is not relevant. I only need to sell one ticket for each show. That said, as the ticket buys the whole show, I was asking for £500 per ticket. This led to the awkward boast that This Is Your Trial is the most expensive ticket on the Fringe. But that became a useful ‘hook’ attracting press coverage in The Scotsman… and a blog by you. 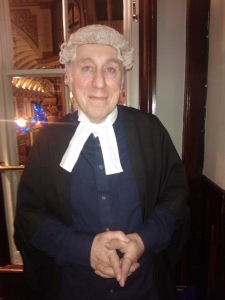 Judge Norman Lovett will preside over a court

“I also decided I needed some big names. So I just approached a few of my favourite acts and asked them directly: Scott Capurro, Mark Dolan, Barry Ferns, Tim FitzHigham, Janey Godley, Tony Law, Norman Lovett, Glenn Wool. To my surprise, each one said Yes.

“But, just as I was beginning to wonder how hard this Fringe thing could really be… I realised I still hadn’t sold any tickets.

“The only person I knew in Scotland was a solicitor in Glasgow who had been to one of my London shows. He bought the first ticket for Inksters, his firm of lawyers. Not so difficult.

“Then Bob Slayer sold another to the cheeky Edinburgh underpants manufacturer, Bawbags and Scottish Borders Brewery.

“The third went to a stag party I found through a local website.

“And then Thomas Black – a local Edinburgh comedian and huge fan of Hearts FC – introduced us to Scott Wilson, the stadium announcer. A couple of calls later and we had secured our fourth booking – a fundraiser for Hearts, who are in administration. Players and fans are invited to watch manager Gary Locke face charges before a court of Judge Norman Lovett, prosecutor Janey Godley and defence counsel Bob Slayer. The show will take place on August 5th at Tynecastle Stadium itself.”

This meant David was staging three private shows, one public show – at Hearts’ Tynecastle Stadium, no less – and he had only one show left to sell before he could boldly claim a 100% sold out show and attach a laurel to his Fringe flyers next year.

“My costs were now almost covered,” he says. “I knew I could pay all the comedians involved and maybe even buy my partner Nina a nice present for putting up with me and my obsession.

“So I decided to stop busting a gut to sell the last show and find a worthy cause instead. I asked The Scotsman’s comedy critic Kate Copstick – who had been super supportive all along – if she would like a show in support of her Mama Biashara charity.

“We did, however, attach one condition, which was that she herself would be put on trial. She is a game bird and she agreed without hesitation.” 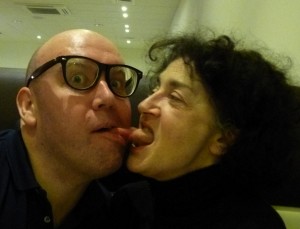 The Trial of Kate Copstick is on August 7th at The Hive venue where she will be charged with being A failed performer who snipes from the pages of the Scotsman instead.

Scott Capurro will be prosecuting Copstick. Bob Slayer will defend her. Glenn Wool is the judge.

Now David is looking for witnesses to the alleged crime.

“Maybe you got a great review from Copstick,” he says in his appeal. “Or you got a terrible but accurate Copstick review that spurred you on to better things… Or maybe you once saw her appear on Chuckle Vision and thought her performance worthy of a BAFTA… If you did get a terrible, unfair, scathing review from Copstick, maybe she was lambasting you because she knew you were better than she ever was?”

If so, he wants to hear from you.

This morning, I asked Copstick what she thought her chances were at the trial.

“I am slightly worried that I have Bob Slayer as my defence lawyer – a bumbling, drunken ex-jockey who is quite likely to get his cock out in court. However, Scott Capurro is the prosecutor and he is going to be so busy cruising the audience and trying to seduce Glenn Wool (the judge) that he will probably forget to do his job. One fly in my ointment is that I am, of course, totally guilty of being a failed stand-up. But please don’t tell anyone.”