“I don’t mind admitting what I find stimulating,” said Martin Soan over breakfast this morning.

Pull The Other One comedy club runner Martin Soan is decorating my hall, stairs and landing this week.

It might seem odd having a man decorate your house who is best known for creating a naked balloon dance.

But Martin has more than a bit of previous, as prop-maker to comedy performers (of which I am not one).

“There was that Edinburgh Fringe show in 1995 where you created a kitchen for Boothby Graffoe,” I said.

“Did you ever see it?” Martin asked.

“No, I missed it,” I said. “But just getting the set in and out of the room must have been a nightmare.”

“For the first 20 minutes,” Martin explained, “Boothby did stand-up in front of a curtain while we erected the set behind the curtain. But, after the third day, I’d ironed-out all the problems and we could erect it in about 8 minutes. There was a table, oven, sink, bookcases, walls, doors and lots of little sight gags round the place.”

“And it was nominated for the Perrier Award,” I said, “but legend has it Boothby didn’t get the award because he wouldn’t be photographed drinking from a Perrier bottle.” 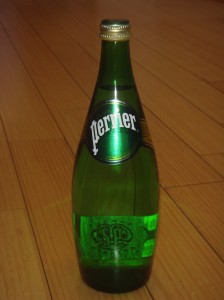 A Perrier bottle without any Boothby Graffoe

“He didn’t like playing up for the cameras” admitted Martin. “I was perfectly ready to prostitute myself. But, to be honest, we weren’t going to win, because it was about time a woman won it.”

“That was Jenny Eclair’s year?” I asked.

“And good luck to her,” said Martin, “But Boothby didn’t behave for the Perrier publicity and  Avalon (Boothby Graffoe’s agent at the time) didn’t want to put the show on tour because they couldn’t see any profit in it. Insane.

“Such a pity, because there were some brilliant gags in it. The concept was there were sight gags all round the kitchen and, five minutes before the end of the show, Boothby said: I’ve gotta just put some washing in the washing machine. Then he said Look after it and left the stage.

“Then there was just an empty kitchen with the washing machine in the middle going Brrrrrrr…. There was a great big pause and silence, then giggles from the audience. Then it goes into spin mode and I’d taken some of the ballast out of the washing machine so it really started shaking and that started vibrating the whole of the set and gradually, bit by bit, everything started falling down.

“The oven walked out and exploded – I had a stick and the top would come down and I’d weighted the top so, when it hit the back of the thing, it lifted everything up in the air….

“The Welsh Dresser’s shelves fell down alternately, either side, and the plates would run down like some sort of pinball machine…

“There was just lots and lots of stuff. We had great big lumps of cornice at the top which were knocked off and the wall was strips of lino so it looked like a solid wall but, of course, when the set fell apart, it used to curl up and fall to the floor…

“The table legs used to jump up in the air and the table would collapse.

“The door was fantastic – a floating door – so there were sight gags with that, where you would open the door one way, close it, then open it the other way and it used to spin on its axis.

“Boothby did this sketch about No 10 Downing Street. The door would spin round. It was black and had No 10 on it. He put on a policeman’s outfit and pretended to be the copper outside No 10, looking around. Then he’d open up the letterbox and shout in You wanker! Then the door would open and I’d stand there bollock naked wearing a John Major face mask.

“There were three of us putting up the set every day, then packing it away and putting it into a Portakabin. There was me and Suzie the stagehand and a guy called Adam. It was a massive show which packed down into almost a zen thing.”

“How long did it take to design and build the set?” I asked.

“About 9 months to make it,” replied Martin.

“And at Edinburgh?” I asked.

In the absence of photographs of a collapsing kitchen at the Edinburgh Fringe in 1995, Martin Soan in my hallway today…

“And this was outside?” I asked.

“We had the Portakabin,” explained Martin, “and I stuck up tarpaulins outside in case it started raining.”

“You got full houses at the Edinburgh Fringe, didn’t you?” I asked.

“The first day, people were really, really worried we could pull it off,” said Martin. “Then there were respectable-sized audiences the first three days and the show was sold out from Day 4 for the rest of the run.”

“So you and Boothby made lots of money out of it?” I asked.

The scams of Malcolm Hardee

Brian Mulligan, of late lamented comedy/music duo Skint Video, read my blog yesterday about the always financially creative Malcolm Hardee, who used to be their agent. He tells me it brought back fond memories of Malcolm “telling venues when they paid us cash that they needed to give us the VAT at 15% – he would say he had forgotten the invoice but would write one out there and then.”

As he was not actually registered for VAT and not entitled to collect it, he used to write down a friend’s telephone number as the VAT number, thus getting an extra 15% on top of the fee, which he then pocketed as well as his agent’s fee.

This was one of the many fine pieces of lateral thinking that Malcolm became known for.

When, on one occasion, he had to send his driving licence to the DVLA in Swansea (one of many, many occasions) they sent him back a new licence in the name of “Malcolm Hardy”. He pointed out the spelling mistake to them and they sent him another licence with the correct spelling “Malcolm Hardee”. But he never returned the first licence. This meant he had two driving licences so, if he was banned from driving and his licence suspended for some dubious motoring offence or offences, he still had what he reckoned was a ‘valid’ licence he could show to police if stopped again – the ‘other’ licence.

When Malcolm’s brother Alex was sorting out paperwork after his untimely death, Malcolm’s phone rang: it was the Inland Revenue rather optimistically asking when Malcolm was going to settle his tax bill. Alex told the taxman that, sadly, Malcolm had died. Their response was:

“You told us that last year, Mr Hardee…”

You can hear Malcolm’s son Frank telling similar stories at Malcolm’s legendary 2005 funeral HERE. If you listen to this, remember that it takes place in a church at a funeral not, as it may sound, at a stand-up comedy club…

(In August this year, the Edinburgh Fringe will include a week of events celebrating the spirit of Malcolm Hardee.)

The most obscene tax in Britain (and Europe)

It’s time to do the quarterly VAT return.

I know this is hardly an original thought but…

Is VAT not just the most appallingly obscene tax ever thought up by any Euro-wanker in the entire history of Euro-wanking?

It’s a tax on behalf of the rich and against the poor.

All big companies and sensible people with loads of money are registered for VAT and ultimately don’t pay it. People on lower incomes and people struggling to make ends meet – single parents, the unemployed, the disabled, the retired, pensioners – are forced to pay it.

What sort of tax is that?

For those registered, VAT is a tax where the money just goes round in a circle and the government does not benefit at the end of the process; it just keeps loads of bureaucrats in pointless work.

In a simplified but basically true break-down…

Company A adds 20% VAT on top of the price they really want to charge and then bills Company B 120% of what they need to charge.

Company A then pays the 20% VAT money it receives to the Taxman (minus loads of expenses) and Company B then claims back from the Taxman the whole 20% of the 120% they paid.

– Company B has lost some money for a short time but ultimately pays nothing.

– Company A has passed on less than full 20% to the Taxman, who has then paid the full 20% to Company B

– So Company B has, ultimately paid nothing and the Taxman has paid out more than he received.

At this level of companies, millionaires and other people who can afford accountants, the whole thing goes round in a circle and creates jobs but not tax revenue. Am I missing something?

There are points in the system where Company A and the Taxman are holding onto money and earning interest on the money from bank accounts – well, Company A is. But that’s the basic system. The money goes round in a circle if you already have a lot of money.

At petrol stations, for example, companies and rich entrepreneurs and businessmen, in effect, do not pay any VAT at all – they claim it all back. But the less well-off who own cars have to pay the full extra 20% which they can’t avoid.

It’s a tax which specifically targets the less well-off which discriminates in favour of the better-off.