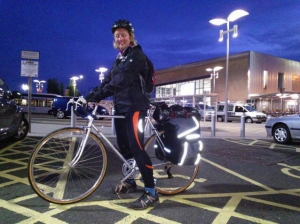 “How are your buttocks?” I asked comedian Sarah Hendrickx last night.

As mentioned in a previous blog, she set off a week ago on an 800 mile cycle ride to Barcelona having only previously ever cycled for 38 miles. I talked to her yesterday, via a Viber line of what was called ‘average’ quality.

“My buttocks are not good, to be honest,” Sarah told me. “I’ve been cycling up to 100 kilometres a day, but it’s been exhausting. It’s been too much, really, so I’ve been having a rest today… My bum has been having a rest day as much as anything… I have special cream.”

“How is your dodgy French getting on?” I asked. “Are you making yourself understood in the villages you pass through?”

“I am just passing,” said Sarah. “I’m not stopping to meet random rural people. The main conversations I’ve had have been with French bicycle mechanics. My aged bicycle Gerard One broke down on Day Two, so I spent two days with various French bicycle mechanics. The second mechanic declared Gerard One entirely dead. It was the back wheel. It was an old bike and new back wheels are a different size. My bike was declared morts.”

“Morts? Merde!” I said. “So you had to buy a second bike? That’s terrible, though it could be worse. I half expected to hear a news item about a British bicyclist being found dead and decapitated in the mountains.”

“It’s been very flat and monotonous so far,” said Sarah, “with long, straight roads stretching ahead of me. But the mountains are still to come, so you may yet not be disappointed.”

“I never thought about the monotony,” I told her. “Have you got an MP3 player to music it up?”

“Have you been following my Tweets?” asked Sarah. “@sarah_hendrickx.”

“I still haven’t got my head round using Twitter while retaining a life,” I admitted.

By this point in the conversation, the ‘average’ Viber connection was playing up quite badly and Sarah was starting to sound like she was talking to me through the overflow pipe of a bath.

“It’s so hot and sweaty and horrible, it doesn’t feel safe,” I think Sarah told me, though I missed the context. 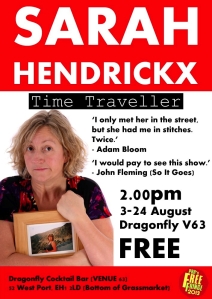 “So do you think there’s an Edinburgh Fringe show in it?” I asked.

“This is only one small part of my Fringe show,” Sarah’s multiple voices reminded me through her apparent bath overflow pipe, “but I’ve got loads of material out of it already… I had a kind of breakdown the other day. I went a bit mad sitting in my tent in a camp by myself and left my tent behind and ran across the road to stay in a B&B which was run by the sort of man you find in an American horror film. I spent the night wondering if this man was going to come and hack me to pieces.”

“That would have made a good blog,” I said, brightening up. “What you should do is fake your own death then reappear just before the Fringe starts.”

“That would be a bit of a desperate way to get an audience,” said Sarah.

“You’re a comedian, so you’re desperate already,” I suggested.

The Viber line then started to deteriorate even more. After a fair bit of metallic-sounding abstract sounds, I heard Sarah say:

“It’s a bit lonely, cycling across France on your own. No-one to share the experience with. It’s a bit crap.”

I think that’s what she said.

“Have you met any other Brits?” I asked.

“Not many,” her multiple voices told me, “but they tend to be intrigued by my journey. The adventure.”

“What’s the reaction when you tell people why you’re doing it?” I asked.

“I’m only halfway through, John!” she laughed. “I’m nowhere near Barcelona. I’m in Poitiers in the middle of France!”

“Are you on schedule?” I asked. 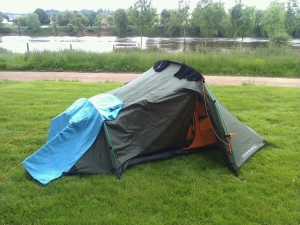 “I’m going to have to slightly cheat and catch a train,” Sarah admitted, “otherwise I’m not going to finish in time. The road network out here is either dual carriageways or farm tracks. It’s very remote and I’ve realised since being here that, at a certain level it’s just not safe. I’ve been on motorways and scared the shit out of myself. The ring road in Le Mans is no place for a person to be. So I’m going to catch a train, then carry on a bit further south. One hundred kilometres a day is too much, really, for my little untrained physical self.”

At this point, the Viber connection went abstract.

“Hoping… weight… become this bronze goddess…That’s probably not going to happen… burning off so many calories… shovelling down my neck… time just for a mid-morning snack… hungry so much… it’s amazing… I can eat, basically, whatever I like… diet… a new diet.”

“The Hendrickx Diet has got a certain ring to it,” I said. “You could become a millionairess by next year.”

The originator of the next trendy diet plan?

“I think so,” laughed Sarah, her voice temporarily clearing. “But you wouldn’t have a job, a family or a social life because you’d spend most of your life dieting… But it’ll save you a lot of money and, yeah, it’ll…”

“It’s going to be a joy to see if I can transcribe any of this,” I said. “Can you hear my voice OK?”

“Viber says this is average quality,” I told her, “but you’re echoing like you’re in a metal tube.”

“But without some psycho owner,” I said.