In London soon: a little-seen Saxon comedian with a chicken on his head 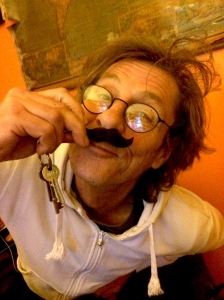 I was in bed all of yesterday, trying to throw off the remnants of a cold which had turned my voice into a rivett-rivetting impression of a frog.

The only real interruption to my sleep was a Skype video call from comic Martin Soan, who was wondering if I was going to his Pull The Other One comedy club show in Nunhead on 29th January.

Wild hoarseness would not stop me, because it is my first chance to see live The Short Man In Long Socks – I always thought he was called The Short Man With Long Socks, but I stand – or, given my cold, lie – corrected. I presume it is a variable translation from his actual German stage name: Der kleine Mann mit langen Socken.

Martin tells me it is Der kleine Mann mit langen Socken’s first live UK appearance. I think I may have seen him back in the 1980s when London Weekend Television’s Entertainment Dept had a tape with video excerpts of Vier gegen Willi a German peaktime TV show which was co-presented by a hamster. I think LWT was considering doing a British TV version but might have been put off by the fear of complaints by animal lovers. In Germany, they had to have multiple Willi doppelgängers on standby because the eponymous hamster tended to die under the hot studio lights.

There is currently a clip of Vier gegen Willi on YouTube, though the star rodent does not appear until 26 mins 16 secs into the clip.

Martin told me yesterday: “I first saw Der kleine Mann mit langen Socken 15 years ago in Leipzig, at Jim Whiting’s club Bimbo Town – the best club I’ve ever been to. It’s full of automata, installations, art, music and performance and is what us Londoners call ‘immersive’ – everything is out of this world and challenging. It’s a funfair of surreal proportions in a disused factory and it is VAST… Jim is a magnetic force and artists of all descriptions gravitate to him. Some aren’t even artists but genius just the same.

“Anyway one such act featured that night I went to Bimbo Town was Der kleine Mann mit langen Socken, I really, really was impressed, It was the most pointless and ridiculous act I have ever seen, but one of the best. There are three sections to the routine. Him getting ready to ‘go out’… Him ready to go out… And then him out. That doesn’t really explain his act, but… “

“I seem to remember,” I told Martin, “that, in Vier gegen Willi, he had a live chicken on his head.” 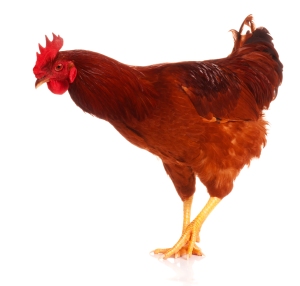 “Is he possibly,” I suggested, “ever-so slightly bonkers?”

“Depends how you define it,” said Martin. “When I met him, he didn’t think any of it was mad at all. I had the feeling it was maybe a little cathartic for him.”

“Why cathartic?” I asked.

“No idea, “replied Martin. “He told me he very rarely did the act.”

“Possibly,” I suggested, “because of a lack of willing or well-balanced chickens.”

“It was just a thing he felt he had to do,” Martin explained.

“And they say,” I mused, “that Germans have no sense of humour…”

“He is fiercely not German,” Martin told me. “He is very definite that he is a Saxon not a German. Apparently he earns a very good living as an optician in Plagwitz (a suburb of Leipzig). He told me Saxons love designer glasses. He invited me around to his flat for kuchen (cake). We got on really well and he showed me his etchings. Very dark, they were – the subjects. Lots of eagles and women wearing horns. Angst is a good word isn’t it?”

“I do,” I agreed, “always enjoy hearing it said out loud.” 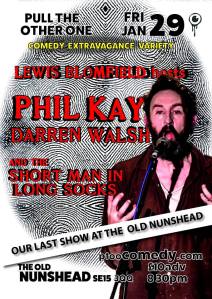 “When I was back in England,” Martin continued, “I contacted him regularly to try and entice him over. I have actually booked him three times and three times he has cancelled and I got resigned to never getting him over for the club. But he’s making it on the 29th of this month because there is some opticians’ convention in London and because Phil Kay is on the bill at Pull The Other One. He has seen Phil Kay perform abroad and he’s a big fan. So he wants to perform with him.”

“Darren Walsh and a nun.”

“I’m not going to ask,” I told Martin. “Some things are best left to the imagination.”

I had tea yesterday with the extraordinarily energetic and charismatic Miss Behave aka Amy Misbehaving, who was telling me all about the Edinburgh Fringe show(s) she will be staging in August at the new Assembly venue in George Square.

That’s an extraordinarily anarchic mind she has there and, as they say, staging anarchy takes a lot of organisation.

Something she said reminded me of Vier gegen Willi (Four Against Willi) – a legendary German TV light entertainment series of the late 1980s which was co-presented by a hamster. Willi helped to make decisions throughout the show and, at the climax, he was put in a maze with three exits and, depending on which exit the co-presenting hamster took, the winning family won their prize-money in either German marks or Italian lira or Austrian schillings. Ah! The glorious pre-Euro days!

At one time, the UK ITV contractor London Weekend Television showed interest in buying UK rights to either some of the Vier gegen Willi games or the entire format itself. When I was at LWT, much joy was certainly had by many, looking at tapes of the part-hamster-presented German TV series. However, there was a big drawback to production of the show.

It was that, under the very hot TV studio lights, the furry creature had a tendency to overheat excessively so, for each show, the producers had to have several lookalike hamsters on standby because it was not at all uncommon for the hirsute co-presenter to die in mid-show.

The great German viewing public, as far as I know, was never made aware of this, but it was thought unlikely that the British tabloid press could have been kept in the dark if ITV had run a Saturday peaktime entertainment series co-presented by a hamster in which the hamster often died and had to be replaced by lookalikes.

So, alas, the UK version was never made.