Sometimes, people ask me: “Is it difficult to find something to blog about every day?”

As I mentioned two days ago, through happenstance, I currently have an awkward blog-jam: I already have enough chats ‘in the can’ and events coming up to publish one-blog-a-day for the next 21 days. This is a problem.

In a blog on 21st April this year, I ran some extracts from my electronic diary back in April 2001, when my father was ill with cancer. I felt I should follow this entry up today. I put a note in my diary to do this.

But, last night, I went to the launch party for Sophie Parkin’s new club Vout-O-Reenee’s, whose opening deserves a mention and at least some pictures. It is described as “a private members club for the surrealistically distinguished”.

I went with performer/artist Martin Soan, showman Adam Taffler and comedy performer Matt Roper. The ticket only gave entry to me +1. But Sophie Parkin is very generous woman. 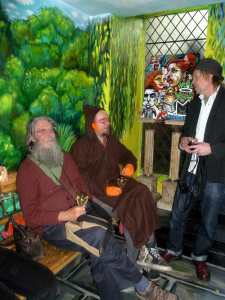 Under a church in the City of London, Vout-O-Reenee’s certainly attracted an eclectic mix of people – everything from a former Channel 4 Head of Entertainment to a man who made his living by painting giant beetles to a prospective Liberal Parliamentary candidate to a man dressed as a monk with a painted face to a local who had managed to gatecrash the party because he had heard there was free booze for two hours.

My blog is called So It Goes because of the phrase repeatedly used in Kurt Vonnegut’s 1969 novel Slaughterhouse-Five. That book partly involves an alien race on the planet Tralfamadore. 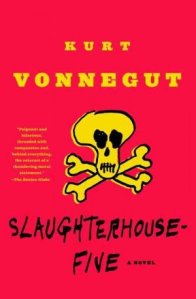 In Chapter 2, the hero Billy Pilgrim writes about the Tralfamadorians’ concept of time:

“All moments, past, present and future, always have existed, always will exist… They can see how permanent all the moments are, and they can look at any moment that interests them. It is just an illusion we have here on Earth that one moment follows another one, like beads on a string, and that once a moment is gone it is gone forever.”

Below is an entry from my electronic diary today in 2001. It may be slightly pretentious. I can’t help that:

In his nursing home bed in Clacton this afternoon, my father’s eyes were staring blankly, focussed on nothing, like the eyes in the photos at the Tuol Sleng interrogation centre in Cambodia: the photographs of men and women before they were taken to the Killing Fields outside Phnom Penh.

As my father is in no condition to travel, my mother and I went to Colchester on his behalf tonight to have the arranged meeting with his Private Consultant (a bowel man) and, it turned out, a second chap (a cancer man).

As we already knew, when my father was opened up, the bowel tumour had been much, much bigger than expected and had grown outwards, infecting the pancreas and a small part of the liver. The bowel tumour was removed during the operation and most (but not all) of the pancreatic tumour. But none of the secondary liver cancer was removed. It was too dangerous to do this.

Currently – four weeks since the operation on 19th April – my father remains easily exhausted. The three steps he has to take from his bed to his commode exhausts him for about two hours. Eating still exhausts him. He cannot get up without the help of two nurses and cannot walk even with them. His appetite is very low, he feels very hot inside and, although OK when lying prone, he is in extreme pain if upright or seated.

His exhaustion and lack of appetite could either be because he is still recovering from the operation or it could be the symptoms of the liver cancer progressing – although the symptoms usually also include nausea, which he does not have. Apparently the heat he feels inside himself is either the wounds from his operation mending or the cancer spreading. He has a slight discomfort but no pain when lying horizontally. Neither Consultant knew why there should be any pain difference between lying and standing.

They told us the only possible treatment for his liver cancer is three months of chemotherapy which in this case, allegedly, would not be as nasty as chemotherapy usually is. The point at which this chemotherapy treatment starts is not too important – there is no vital urgency. What is more important is that he is strong enough to take the chemotherapy, which he is certainly currently not. The way the cancer man phrased it was: “The start date isn’t important; it’s how you get through it.”

With people who have this chemotherapy treatment on the liver, the effect rate is roughly:

A worst-case scenario (which my mother now knows) is that my father could die in “a month or so”. When I asked for a longest-term duration a couple of weeks ago, I was told around 18 months. My mother has not been told this. My father’s sister (who is an ex-hospital matron) had assumed a year.

The main Consultant (the bowel man) is writing to my father’s nursing home. They will arrange to get blood for two blood tests which will enable the Consultants to know if the liver is deteriorating quickly and if it seems likely he could take chemotherapy. Another appointment has been made for 20th June in Colchester for consultation – theoretically with my father or, if not, then again with my mother and me.

Tonight I went to tell my father what we had been told at the consultation, but he was asleep and, when awoken by me making noises, was not really together enough to have any sensible talk. He and I agreed I would talk to him tomorrow, though I guess he will forget I was there tonight. His ability to think clearly or to remember anything has been virtually non-existent the last couple of weeks and it is deteriorating, so whether much will sink in I don’t know. Anyway, I will see him tomorrow.

On the drive back from Colchester, my mother said to me: “It’s much worse than I thought it would be.”

When she got home, she phoned friends and neighbours to tell them what had happened and said: “Just don’t give me sympathy. I can cope provided I don’t have that.”

I went to tell my father in the morning but he was being bathed before lunch, so I went back at 4.00pm – long enough for him to recover from the inevitable exhaustion.

He seemed brighter after his bath.

I told him what the Consultants had told us: that he had cancer, that the only treatment was chemotherapy, but that he could only be treated if he got stronger.  I told him the effects of liver cancer were exhaustion and lack of appetite, which he has, but also nausea which has never had. Inevitably, about four minutes later, he started feeling nauseous.

“When a Tralfamadorian sees a corpse, all he thinks is that the dead person is in a bad condition in that particular moment, but that the same person is just fine in plenty of other moments. Now, when I myself hear that somebody is dead, I simply shrug and say what the Tralfamadorians say about dead people, which is ‘so it goes’.”

With me – with most things – I simply shrug and think: Life’s a bitch and then you die.

One source says that quote only dates from 1982, the year it appeared in the Washington Post, although the rapper Nas extended it rather well in his 1994 Life’s A Bitch song featuring AZ:

Life’s a bitch and then you die; that’s why we get high
Cause you never know when you’re gonna go

I don’t do drugs. I go to comedy shows and appreciate surrealism.

Vout-O-Reenee’s is an interesting club.

Matt Roper told me that yesterday would have been his father’s 80th birthday. His father was stand-up comic George Roper. He died of cancer in 2003.