The one, the original – President Obonjo – cajoles, intimidates and for sure entertains his audience

In the last four days, within the cyber bubble of the UK comedy industry, there has been a shitstorm on Twitter and Facebook about BBC Studios apparently ripping off a character comedian’s long-running on-stage persona and selling a series pilot based on it to E4 (part of Channel 4).

So obviously, yesterday, I had a chat with the wronged ‘President Obonjo’ aka comedian Benjamin Bankole Bello (remember that exact name).

There is a certain element in this rip-off by the BBC of life imitating art.

President Obonjo Stole My Identity – at Edinburgh in 2015

In 2015, at the Edinburgh Fringe, Benjamin performed a show: President Obonjo Stole My Identity.

“Remind me what it was about?” I asked him yesterday.

“And you performed that around the London circuit…”

“Yes. And around the country. And for two weeks at the Edinburgh Fringe. It got a 5-star review from Fringe Guru and 4-stars from The Wee Review.”

In an August 2015 blog from the Edinburgh Fringe, I wrote about Benjamin performing President Obonjo Stole My Identity: “He has great audience control. The character was immediately taken-to-heart by the audience. And then he takes the uniform off, becomes Benjamin Bello and analyses the nature of character comedy, wonders why the character he writes and performs is funnier than he himself is on stage… and then puts the uniform back on and becomes the character again. Loud, loud laughter.”

I myself had first blogged about the President Obonjo character when I met Benjamin at a radio show recording in Streatham in September 2014.

In November 2016, I interviewed him about his appearance in the final of the Leicester Square Theatre New Comedian of the Year competition.

In that year, he had reached the finals of seven comedy competitions and won two of them. It “has helped my profile” he told me then. 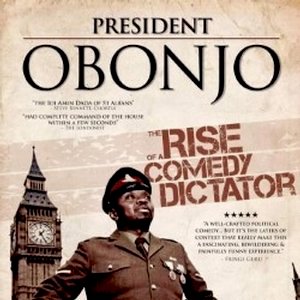 Obonjo’s 2017 Fringe show – The Rise of a Comedy Dictator

In August 2017 I blogged, again from the Edinburgh Fringe, that his “African dictator character dominates any room and he had a “full-to-the-brim audience eating out of his hand… a tribute to his skill.”

Bear all this in mind, dear reader, in what follows. Remember almost ten years on the comedy circuit, the Edinburgh Fringe shows, the 5-star-reviews.

By the next day, Chortle had contacted Benjamin Bankole Bello about the rip-off fake Africal military dictator Colonel Banjoko character (note, too, the similarity in names) because the President Obonjo character is so widely known by people in the comedy industry and is the only fake African military dictator on the comedy circuit. When reviewing President Obonjo over the years, Chortle had previously written: “It’s a great comic construct.”

The Londonist had reviewed Obonjo as having “the potential of that high-status, comedy bomb-proof kind of character.”

Fringe Guru, giving President Obonjo Stole My Identity a 5-star review, wrote: “On the face of it, it works as a well-crafted political comedy… But it’s the layers of context that really make this a fascinating, bewildering and painfully funny experience.”

When Chortle talked to Benjamin Bello last week, he told them: “E4 and BBC Studios have stolen my act… I have been developing the character President Obonjo on the comedy circuit for nearly ten years. I have carefully crafted the comedic personality of an African military dictator adrift in the UK and the similarities to the E4 pilot announced yesterday are deeply worrying… This is stealing 10 years of work.”

BBC Studios claimed their character (an African military dictator adrift in the UK) was the idea of “the BBC Studios Comedy team”.

But this is not what people in the comedy industry thought.

President Obonjo in Streatham back in 2014

Comedian Dane Baptiste, a personal friend of actor Samson Kayo, said: “This is clearly a rip off of @realObonjo, a character that we on the circuit know and love. And we know nobody there came up with it because, well, you know…”

Comic Ignacio Lopez posted: “I saw a story about @E4Tweets’s new ‘African Dictator’ show & was about to congratulate @realObonjo, then I read it & realised it’s someone else. I find it hard to believe nobody flagged up the blatant similarities at any point during the development.”

The Wee Review website wrote of the announced E4 show: “A mad African dictator terrorising his audience for laughs? Count us in. Sounds like a great concept. In fact, we know it’s a great concept because someone’s successfully been entertaining Fringe audiences with it for years. And his name is President Obonjo… Comedy is a small world and it defies credibility that someone in a position to make or commission a TV comedy was not aware that a circuit act had been performing a very similar act for a decade. The assumption has to be they knew. And they knew they could get away with it.”

I agree. Either “the BBC Studios Comedy team” blatantly and intentionally stole the President Obonjo character thinking that they could wantonly and without consequence fuck-over a hard-working comic who does not (yet) have an agent… or “the BBC Studios Comedy team” had never heard of a widely-admired, widely-known, well-reviewed, award-winning comedy act which had been successfully playing the circuit for ten years and had appeared multiple times in full-length shows at the Edinburgh Fringe.

If “the BBC Studios Comedy team” are not thieves, they are so utterly ignorant of their own area of entertainment that they should be sacked for utter laziness and for being incompetent wankers.

It is not as if the President Obonjo act was unknown to the BBC.

He was twice in the BBC New Comedy Awards competition – “I submitted my videos to them: I think it was 2012 and 2014,” Benjamin told me yesterday.

President welcomed me in London yesterday

“So they saw you in uniform in character in the videos?” I asked.

“Yes,” he confirmed. “And they acknowledged. They said: Yes, we like what you do. I also applied for the Caroline Aherne Bursary Scheme at the BBC in 2018 and I submitted sketches to BBC3 this year.”

(BBC3 is the channel which produced and transmitted Famalam, the series in which Samson Kayo starred – the same Samson Kayo who was announced as starring in the BBC Studios Obanjo rip-off series for E4.)

“The sketches you suggested to BBC3 specifically featured the President Obonjo character?” I asked.

“Yes. They just said: Come up with ideas. If you’ve got any sketch ideas, submit them to us. So I submitted ideas for the President Obonjo character.”

Given that E4 has commissioned a potentially career-destroying rip-off copy of President Obonjo’s 10-year-running character, it is worth remembering that parent company Channel 4’s statutory remit is “to deliver high-quality, innovative, alternative content”… Call me pedantic, but I do not see this statutory – I repeat statutory – remit to deliver innovative content as being the same thing as ripping-off existing, hard-working performers.

To look on the bright side of this utter shitstorm, we are one week away from the start of the Edinburgh Fringe, at which ‘President Obonjo’ unveils a new hour-long show: Goodbye Mr President… You could pay thousands to a PR guru to get publicity like this.

I saw a work-in-progress preview of the new show two months ago and posted that the preview of Goodbye Mr President “was extraordinary and should be even more astonishing by the time it reaches Edinburgh. A tragic, true, single story which elicits natural laughs. It feels like the ideal Fringe show. Serious points being made about comedy, comedians, friendship and life. Laughs, tears, a gripping narrative and serious thoughts to take away from the venue.”

To continue looking for a twinkle of daylight among the BBC bullshit, this story of the BBC stealing President Obonjo’s identity and selling it to E4 could form the basis of a fascinating Edinburgh Fringe show by Benjamin Bello in 2020.

… MORE DETAILS OF THIS STORY IN A LATER BLOG HERE …