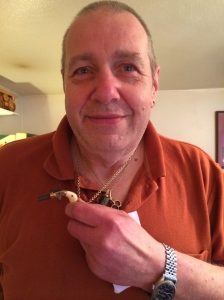 Lou greeted me with a small firearm yesterday

When I went to see my chum Lou at his flat yesterday lunchtime, the first thing he said was: “Ello, mate.”

The second thing he said was: “I’ve had a new machine gun delivered.”

All perfectly legal. Bullets can’t be fired from them. He provides them for movies.

“Did I tell you I found out who my grandfather was?” he asked me later.

“Well, I did and I didn’t,” he said. “Two or three years before my mum died, I said to her: Why don’t you tell me all the family secrets?

“She said: Well, I’m illegitimate. She was very ashamed of it. I said: Well, it ain’t your fault. It’s nothing to be ashamed of. Some people are born bastards; some people become bastards.”

“Yes,” I said. “After my father died, my mother told me her father had been illegitimate. But, to our generation, it doesn’t matter at all, does it? My grandfather was born in the 19th century. My mother told me in the 21st century. It was a shameful secret in the early 20th century; by the end of the century it was just normal.”

“I asked my mother,” Lou said, “How did you find out? She told me: I was born in 1917 and my father came home from the War in 1918… Oh! I said. That’s why he used to knock YOU about and not all the other kids? She said: Yeah. That’s why she was partially deaf. He used to bash her.

“When she was 13, her sister said: Do you know who that man is? My mum said: That’s the tallyman – it was a bloke who used to turn up in a Rolls Royce every week or two. Her sister said: No, that’s your dad. He’s giving mum some money for you.

“I thought my mum said he was the Honourable Playdel Bouvier so I looked it up. I found the Bouvier family, which was President John F Kennedy’s wife’s family and I said to my mum: Oh, you’re illegitimately related to JFK’s wife. But I was wrong.

“I tried to find this one Playdel person and eventually it came up Did you mean Pleydell-Bouverie? So I pushed the button and there he was. The Right Honourable Sir William Pleydell-Bouverie, 7th Earl of Radnor. 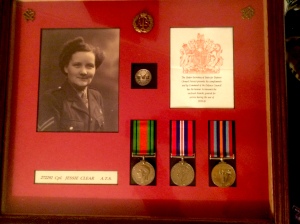 “This man didn’t have to give my mum’s mum money every week. If he owned the land she lived on, he could have just told her to fuck off. It was 1917. He would have been like a local god. He had huge amounts of money and nobody else had anything in those days. But he gave her money to raise my mum.”

“My father used to tell people that, during the Second World War, he dished out bullets and blankets. He said he didn’t actually fight in the War. After the War, he drank 50 bottles of Whitbread a day, because he was in the trade. He was a very dangerous man. If you touched him when he was asleep, he’d hit you and then he’d get the hump because you’d upset him. He was a very hard man to deal with.

“He’d tell me: Here’s some money, son, now fuck off. I could have any amount of money I wanted, but he wouldn’t put his arms round me and tell me he loved me.

“When he died, this bloke called Dosser Chapman phoned me up and said: I served in the War with your dad and I’m doing this scrapbook for the Lifeguards Association. Have you got any pictures of your dad?

“He said: Your dad was a wonderful man. I said: Was he? You shoulda tried living with him!

“This Dosser bloke said: No, no. We went rough the War together. He was a wonderful man. I said: You might have the wrong bloke, mate.

Lou’s dad after the War

“I said: How many of these sentries did he kill? Dosser said: Well, I didn’t go on every mission with him, but I know he killed at least eleven men and he only ever got upset once. I said: Why was that?

“He said: He cut this bloke when this bloke was looking at his pay book. The pay book dropped.

“You don’t die right away when your throat’s cut. It takes about 10 or 12 seconds to bleed out. And, as the bloke dropped, my old man picked up the pay book and there was a picture of the guy’s wife and three little girls.

“He showed it to the bloke on the ground and the bloke looked at the picture as he died.”

“What happened then? I asked.

“Dosser said: Your old man started crying. So I left it about five seconds, then touched him on his shoulder and said ‘We gotta get on with it, mate’.”

“He wiped the knife, Dosser told me, and then killed the next one. So I said: Nah! I said: My dad didn’t fight in the War.

“Dosser asked me to send him pictures of my dad and he sent me some. He sent me this picture of a group of them with my old man sat at the front and at the bottom, written in at the time, was HELL’S ANGELS. This was about 1942 or 1943.

“I said to my uncle – who was about seven when my dad was a teenager: I didn’t realise my father fought in the War and killed people. He said: I’m not surprised. He was seconded to the Long Range Desert Group. I mean, my God! They were a load of murdering bastards dressed in pink.” 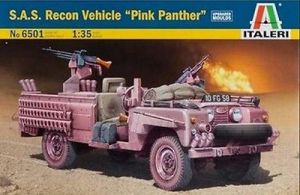 “They used to paint their jeeps pink.”

“Because it merged in with the sand?” I asked.

“Apparently so,” said Lou. “My dad also won the King’s Medal. It was stolen with my mum’s wedding ring from the old Conservative Club in the 1950s when I was a tiny child.”

“Your father ran the local Conservative Club, didn’t he?” I asked. 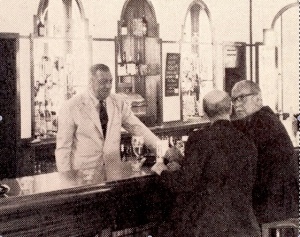 “He was in the booze trade as soon as he left the Army, really. He gave up his driving licence and took to drink and then later he got pissed off with me cos I took drugs.”

“You were just doing weed, though?” I asked.

“Oh no, I got into everything.”

“Oh yes, I was just smoking puff and he thought I was an awful person for taking cannabis and there was him banging back 50 bottles of Whitbread a day. For him, that was normal.” 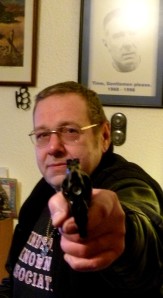 “You would think so,” said Lou. “But he could drink that amount and seem sober. If you gave him one whisky, though…fuck me, he was a really dangerous cunt then. He would knock my mother about.

“His family owned half of Upper Brook Street in Winchester, a hotel, two hairdressers and a bar. It’s all gone now. Him and his brothers were very good at betting on one-eyed, three-legged horses and drinking. It all went.”

Yesterday afternoon, my chum Lou showed me a couple of knives he had made recently.

They have little holes bored in their hollow blades so the fake blood will spurt out when it is pumped through a tube when you pretend to cut someone’s throat.