Why people really laugh at comedians…

Last month, I was interviewed by Dr Maria Kempinska, founder of the Jongleurs comedy club circuit, who was awarded an MBE for her contribution to British comedy. She is now a psychotherapist. I talked to her for Your Mind Matters, her series of hour-long chats on the Women’s Radio Station. This is a brief extract of what I said.

… Performing comedy is a bit like performing magic. It’s all to do with misdirection. In magic, you’re looking at the wrong place when, suddenly, something happens somewhere where you are not looking.

In comedy, you have the audience going along a storyline – even if it’s just a short storyline for a gag.

It’s like a big AAAAARRRRGGGHHHHH!!! But, instead of gasping, they go: “Ahahahahaha!” and laughter is a sort of release of tension. It’s a reaction to something unexpected that happens…

(The full interview is HERE.)

John Ryan – “Most comedy is about the self-indulgent egos of the performers.”

Comedian John Ryan appeared in this blog a couple of times in 2014. The first time, he talked about scripting Teletubbies and getting awarded a Royal Society for Public Health Special Commendation for contributions to the field of Arts and Health Equalities.

In the second, he said: “People ask me why I’m not as big as Michael McIntyre and I say I’m just too normal.”

Recently, he contacted me about his new online radio show Reading The Signs. His pitch was: “It is on two sister stations: Men’s Radio Station and Women’s Radio Station. It is the world’s first and only comedy and mental health radio and social media show going out on YouTube, Twitter, FacebookLive and Soundcloud as well as over 40 stations worldwide as part of the deluxe radio network.”

So we talked via Skype… 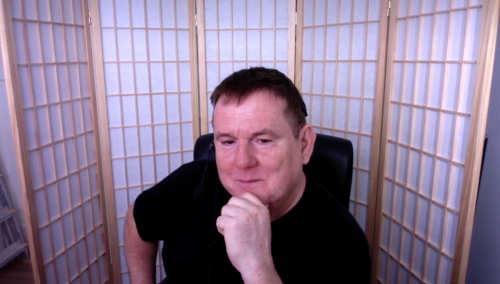 ME: You’ve not taken a conventional comedy career path…

JOHN RYAN: Well, ten years ago I decided, rather than pursue that elusive dream of being on 8 Out of 10 Cats and Mock The Week, I thought I would use my academic background. So I got into ten years of community care work and pursued that avenue. And this is the next step.

ME: You do stuff for about five NHS regions around the country.

ME: But you are still a comedian.

JOHN RYAN: Essentially, yeah. Up until the Covid lockdown, I was still doing cabaret on cruise ships and doing all the clubs up and down the UK.

ME: So, if you had to put your primary ‘job’ on your passport, what would your profession be?

JOHN RYAN: (PAUSE) Memory maker. (A LONG LAUGH) I suppose I would put down Entertainer, really.

ME: Reading The Signs is…?

JOHN RYAN: Every week, I get a comedian on and we talk about comedy: how they got into it, why they did, gig experiences… but also how they stay resilient, especially through the last 18 months.

At the best of times, comics are ‘fragile’. So having no live work for the last 18 months meant having no constant validation from audiences, no ‘love’ and no money. It’s a combination cocktail for disaster and I’m interested in how they have survived. If THEY can do it, then the average Joe in the street can maybe learn stuff from them.

ME: It started online a couple of weeks ago… 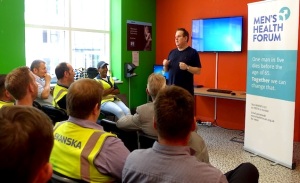 JOHN RYAN: Every Monday at 7 o’clock.

There is a company called WJ who do all the road markings on the motorways and schools and places and they sponsor me. They have been using me for the last three or four years to go into their teams and do well-being training, mental health training and corporate comedy shows.

Traditionally I’ve just done men’s health and men’s mental well-being. But this is more about the resilience of comics.

Just cos you don’t appear on 8 Out of 10 Cats don’t mean you can’t make a good living. I’ve travelled the world. It is possible to make a GOOD living from a comedy career even though nobody knows you. I live in (he mentions a very up-market area of London).

ME: So it is possible to monetise comedy without being on TV? 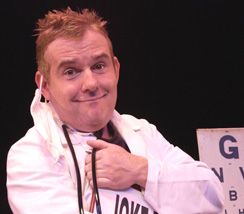 “When everyone was trying to get on the train…”

JOHN  RYAN: When everyone was trying to get on the train with the Off The Kerb and Avalon agencies, I targeted the NHS and BUPA and, when auditions and castings came up, I got onto the cruise ships and the military gigs and the corporate circuit. My thing was not about doing comedy as a vanity project. I was raised in Hackney and…

ME: Hackney is a bit Yuppie…

JOHN RYAN: I grew up there before people ate avocados for breakfast.

Most comedy is about the self-indulgent egos of the performers. But Reading The Signs is actually about getting below the surface and seeing what makes people do comedy. So, if there’s anyone out there suffering from depression or anxiety or mental un-wellness, they can see that most comics have got some kind of ‘block’ that stops them being able to interact ‘normally’ or in a ‘usual’ manner. 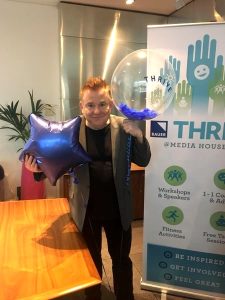 One of the things about mental health is that, when you suffer, you’re excluded from mainstream society.

ME: You got interested in mental health because of family things?

JOHN RYAN: Yes. My mother suffered from clinical depression all her life and, as a child, I used to sit with her on her dark days and just read loads of books which meant I developed an amazing thirst for knowledge.

Both my parents were barely literate, but I managed to get a Masters Degree plus two other degrees. And it was all because of what I picked up as a little child: the quest for knowledge; the drive to know Why is that like that?

ME: A Masters Degree in what?

ME: And the other two degrees?

JOHN RYAN: One in Social Science. The other in Trade Union & Labour Studies.

“The quest for knowledge… to know Why is that like that?“

JOHN RYAN: It was hobbies.

My first degree was because I wanted to get out of Hackney and change my friendship circle.

But the others I did as hobbies. I also have an NVQ in Gardening… I just like learning.

ME: Is your life going to dramatically change when the Covid lockdown finally ends?

JOHN RYAN: I have a reluctance to travel now. In the year up to lockdown, I did 64 flights.

ME: Any change to your on-stage style because of lockdown? Zoom gigs are very difficult for comedians – no feedback; no laughter.

JOHN RYAN: Well, I think comedy is like sex. It’s always better if there’s someone else doing it with you and they’re near you and enjoying it. But my comedy was never necessarily funny stories. It’s basically just sheer force of persona. So Zoom suited me. I’ve come to terms with Zoom.

ME: Have you lost part of the urge to step on a live stage?

JOHN RYAN: No. I did a live gig last week and loved it. The audience was very receptive and really willing. But I think we have to embrace the fact things have changed.

I’ve been talking to someone about doing a little theatre tour in the autumn and what we will do is sell tickets for a live audience but also stream it online.

ME: Any other projects?

JOHN RYAN: I’ve written a kids’ book – me and my mate have written it. It will be published next month.

JOHN RYAN: A Mission Most Fowl.

ME: I smell chickens.

JOHN RYAN: It’s basically four anthropomorphic creatures in a post-Apocalyptic future… Mankind has gone… There are some genetically-modified animals living in a cave where all Man’s technology was. Some baddie ducks want to capture the cave and take over the planet.

ME: For what age kids?

JOHN RYAN: 11 upwards. Publishing a book was on my tick list of things I wanted to do.

JOHN RYAN: To be in a musical.

ME: That’s not impossible.